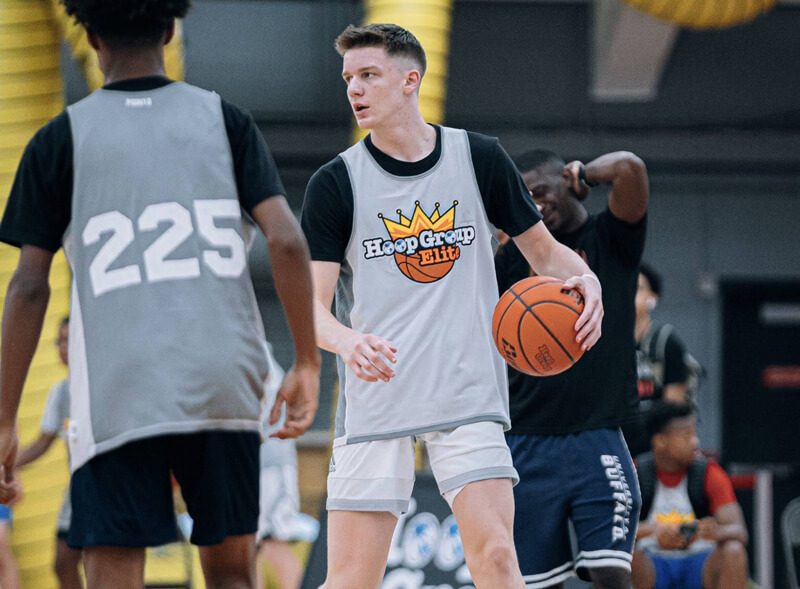 By RYAN McMULLEN Justin Taylor, the Class of 2022 wing from St. Anne’s-Belfield School (VA) and Team Takeover AAU, said several schools are prioritizing him in recruiting. “I’d say Syracuse, Indiana, Virginia Tech are all prioritizing me,” he told ZAGSBLOG. “And even though they haven’t offered yet, UNC, Virginia, and Michigan are as well,” he said. According to 247Sports, Taylor is ranked No. 60 nationally in the Class of 2022 and is the No. 3 player in Virginia. Taylor then broke down each school. Syracuse: “I’ve built a really good relationship with [assistant] Coach [Gerry] McNamara as well as Coach [Jim] Boeheim. They always talk about how well my playing style would fit into their system with the ability to shoot and score the ball, and previous guys similar to me who are successful now at the next level. They believe if they include me and the right pieces, that they have another shot at a National Championship team.” Indiana: “I have stayed in consistent contact with [assistant] Coach [Kenya] Hunter and Coach [Archie] Miller, and their pitch is how they want my 2022 class to be the class that kind of turns their program back to the powerhouse it was. They talk about how they need guys who can shoot and score the ball, and how I can come in and do that automatically.” Virginia Tech: “I’ve gotten to know [assisant] coach [Kevin[ Giltner and Coach [Mike] Young super well, and seeing the type of system Coach Young has brought from Wofford to VT where their offense is geared around guys who can really shoot it is definitely appealing. “ North Carolina: “[Assistant] Coach [Steve] Robinson is someone I’ve built a good relationship with, and he always talks about how they need guys who can shoot and score the ball. They like my versatility and how I can play and guard multiple positions.” Virginia: “With it being my hometown school, I’ve gotten to build a great relationship with not only the coaching staff but the players as well. Seeing the success of the program and of the players that have come out of there is for sure appealing to me.” Michigan: “Since this summer I’ve started to talk to [assistant] Coach [Howard[ Eisley pretty consistently, and they love my ability to play multiple positions from bringing the ball up the court to playing in the mid post. They think my versatility and scoring ability would fit well into their system.” As for a timetable for cutting his list and committing, he said, “I think I will probably want to wait until after the EYBL spring sessions before announcing anything about a cut list. I’ll most likely commit this coming summer before my senior season.” Follow Ryan on Twitter Follow Adam Zagoria on Twitter Follow ZAGSBLOGHoops on Instagram And Like ZAGS on Facebook