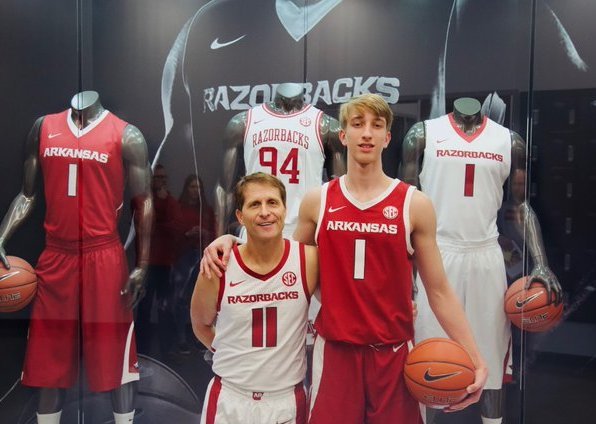 By JACOB POLACHECK Class of 2022 forward Joseph Pinion has committed to Arkansas, he tells ZAGSBLOG. “I’m committing to Arkansas,” he said by text ahead of his announcement. The 6-foot-6, 180-pound small forward from Morrilton (AR), chose the Razorbacks over offers from Kansas, Baylor, Creighton, Murray State, Oklahoma and Ole Miss, among others. He broke down the deciding factors for his commitment: “The way they try to play to fit my play style,” he said. “Previous guys who play like me have had success there over the years.” Pinion becomes the first commitment in the Razorbacks’ 2022 recruiting class. “I’m fine with any one else joining,” he said. “It’s such a deep class. I’m excited to see how it turns out.” Pinion took an unofficial visit to Arkansas last year (Nov. 2). According to 247Sports.com, Pinion is ranked as the No. 28 small forward and No. 150 overall prospect in the Class of 2022. “[Arkansas fans] can expect a player who plays extremely hard,” he said. During the 2019-20 season, Pinion averaged 18.1 points, 7.9 rebounds, 1.6 steals, 1.4 blocks and 1.3 steals per game. Follow Jacob Polacheck on Twitter Follow Adam Zagoria on Twitter Follow ZAGSBLOGHoops on Instagram And Like ZAGS on Facebook