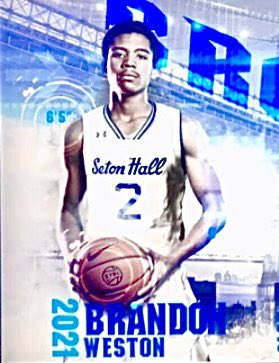 By ADAM ZAGORIA Seton Hall added to its recruiting haul for the Class of 2021 on Sunday when they landed a pledge from Brandon Weston. Weston, the 6-foot-5, 198-pound shooting guard from Brooklyn, N.Y. and Hillcrest Prep (AZ), chose the Pirates over Michigan and Pittsburgh. Ranked the No. 11 small forward in 2021 per 247Sports.com, he also considered Wake Forest, Western Illinois and Illinois. Assistant coach Duane Woodward was the lead assistant for Weston. “I’m going to Seton Hall,” Weston said Sunday ahead of his public announcement. “Just basically they showed the best interest and just the style of play. And coach [Kevin] Willard is a really good coach. He’s a players’ coach, you always want to have a players’ coach who’s going to work you out and let you play through mistakes. And I just felt it was the best fit for me.” Myles Cale graduates Seton Hall in 2021 and Jared Rhoden will be a senior in the 2021-22 season, so Weston will enter with a chance to see more playing time. Weston joins point guard Ryan Conway and small forward Tyler Powell in Seton Hall’s 2021 class. “Immediate impact as soon as I get there, as soon I step on campus,” he said. “They’re looking for me to be a big-time player, play a lot of minutes and take them to the [NCAA] Tournament. They go to the Tournament mostly every year.” Weston visited Seton Hall last summer before the pandemic, and his mother attended several games this past season.

If it was @NikeEYB peach🍑 jam this year boy o boy. It would have been a lot of highlights on this young man. #OptimumsPrime @BWest233 Brandon Weston 2021. 🎥🎥 @BallersBridge pic.twitter.com/sh66mTh8YG

He averaged 24 points, 10 rebounds and 3 steals for Morgan Park (IL) last season before transferring to Hillcrest, where former NBA guard J.R. Rider is an assistant. “He is going to Hillcrest because he feels that being there he can elevate his game in be prepared for college when he gets to Seton Hall,” NY Rens coach Sean Adams said. He added: “His upside is very scary because at his position with his size playing the 2, at 6 6 he can be a match-up problem. “He’s very skillful at shooting the ball, he rebounds and he takes people off the dribble when it’s a mismatch or not. He’s also a big team player.” “Brandon Weston is a 6-5 guard who is extremely versatile on the offensive and defensive side of the ball,” NY Rens coach Andy Borman said. “He is skilled, tough, and smart. “I think Brandon is one of the toughest guards and most competitive players in the country. He loves to play and he loves to win. All of his innate toughness shows when he is on the court with his teammates. “One of the best things that I have seen from Brandon over the past month, since we started working out again, is his natural feel for the game. I always knew that he had all of the skills necessary to be a big-time player, but it has been a pure joy to see how great of a decision-maker he is with the ball in his hands.” Follow Adam Zagoria on Twitter Follow ZAGSBLOGHoops on Instagram And Like ZAGS on Facebook

2021 Christopher Mantis is down to six