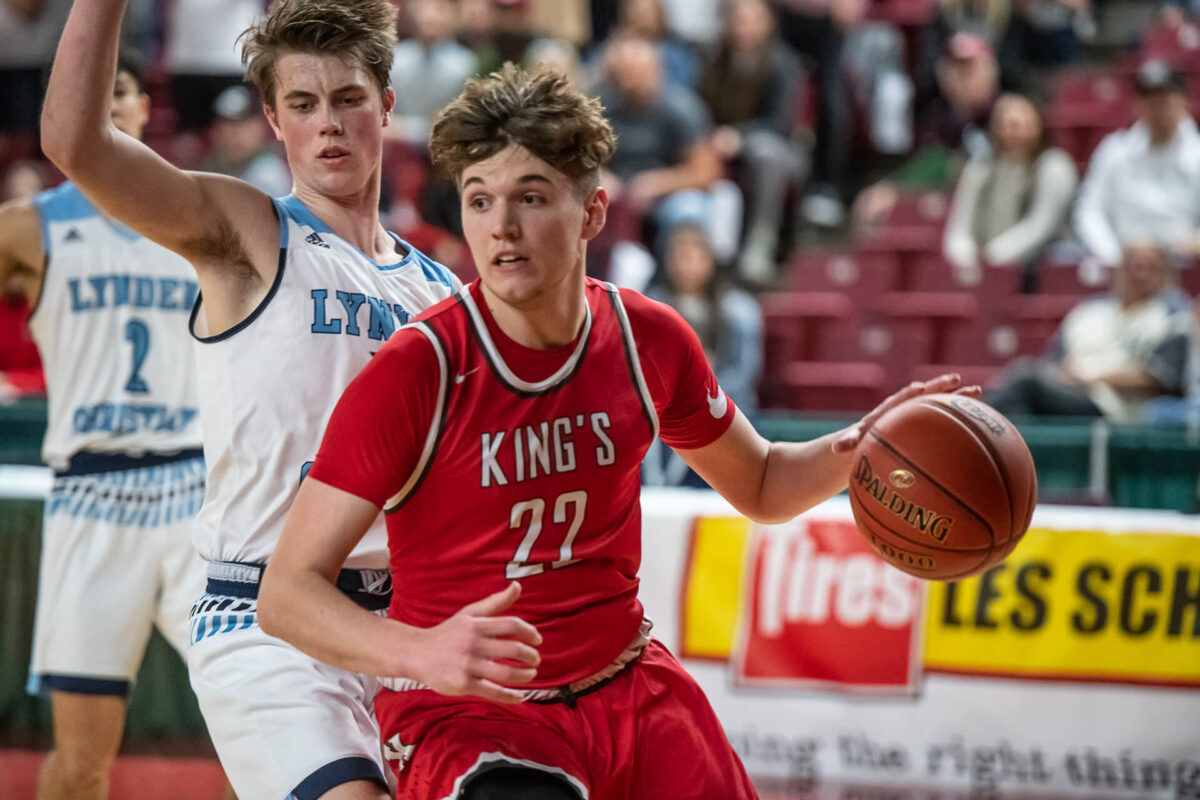 By JACOB POLACHECK Class of 2022 forward Tyler Linhardt has always had a knack for turning a negative into a positive. “When I was really little, I had really bad anger issues,” he said by phone Sunday. “It allowed me to be super competitive from the jump.” Now, as he enters his junior year at King’s (WA) High School in Seattle, Linhardt has been able to channel that aggressiveness on the basketball court, leading to numerous Division 1 offers. Linhardt, the 6-foot-7, 210-pound power forward, currently holds offers from Washington, Washington State, Eastern Washington and Boise State. He broke down each school for ZAGSBLOG: Washington: “I’ve talked to coach Dave Rice. He’s been the main one recruiting me. They’re looking to add skillful players into their program. They like what I can bring to their team on and off the court. They really like my size and how versatile I play.” Washington State: “At the start, they thought I was definitely just going to go to Washington, but when they heard that I was open to everywhere, because I am, they quickly picked up. They’ve been watching me for a while, so they know what I’m about, how I play, the style I play and coach [Kyle] Smith thinks I’d fit well in their system.” Eastern Washington: “They were the first that offered me. They picked up on me early, towards the end of my freshman year. They saw a bunch of potential and they knew I was going to blow up. I talked to coach Bobby Suarez, the assistant coach, he always knew. He said, ‘yeah, you’re going to end up with a bunch of offers’. At the time, I didn’t really know. I wasn’t thinking that far ahead, but I always have respect for them since they were the first school to give me the opportunity.” Boise State: “Coach Leon [Rice] is great. I went on an unofficial visit there. It’s super great. I talked to him and he really likes my game, how I fit in with everyone off the court. He thinks that I would do really well at Boise State and could come in and do big things for them.” Linhardt is also receiving interest from Gonzaga, Stanford, Pepperdine, Santa Clara and Oregon State. He recently had a Zoom call with Santa Clara staff on Tuesday. “They were just telling me what Santa Clara is about, what their coaching staff is about and the history behind it,” Linhardt said. “They were showing me why they think Santa Clara is the best fit for me.” Linhardt says that academics are his top priority, while also taking into consideration his fit with the program. “I want to graduate with a nice degree or take the best opportunity if it comes before,” he said. “And then, how I fit in their program and how I can help win games. “Their play style also comes into hand, how they run their offense and defense. The coaches, I mean there are a lot of factors.” With two years left in high school, Linhardt says he’s ‘not too worried’ about a decision right now. “There’s really no need, especially given the coronavirus pandemic,” he said. “There’s no need to make a decision early because nothing is really happening. “I’m just trying to wait it out and see who gives me the opportunities.” According to 247Sports.com, Linhardt is ranked as the No. 28 power forward and No. 148 overall player in the Class of 2022. “I’m 6-foot-7 and can definitely use my body to my advantage, scoring over smaller players, stepping back against bigger players,” he said. “I can shoot the three and I’m pretty versatile, so that’s how I’d describe my game.” This past season, Linhardt averaged 21.8 points, 12.3 rebounds and 3.5 assists per game as a sophomore, leading King’s to a 1A state title and being named the tournament’s most valuable player. For many, the coronavirus pandemic has prevented players from performing in front of college coaches, as the recruiting dead period has been extended through August. But once again, Linhardt has turned a negative into a positive, using this time to improve as a player. “I lift every other day if not every day,” he said. “My family has a garage with whole weight room in it, so I’ve been very fortunate with that. My high school actually opened up the gym with a slot at 9 for us. I usually lift around 1 and then go workout at 9 most days.” Photo: Scott Butner Follow Jacob on Twitter Follow Adam Zagoria on Twitter Follow ZAGSBLOGHoops on Instagram And Like ZAGS on Facebook