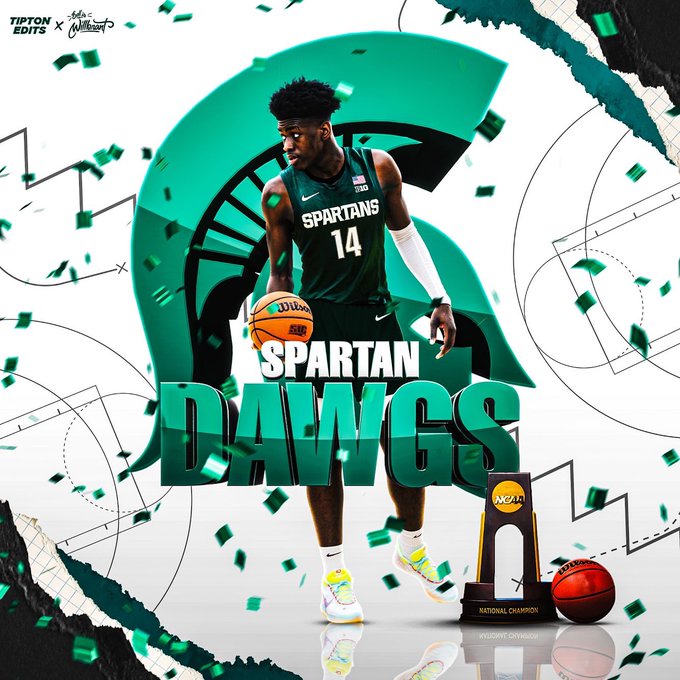 By JACOB POLACHECK Class of 2022 center Enoch Boakye has committed to Michigan State. Boakye, the 6-foot-10, 240-pound center from George Harris (ON) Prep, announced his commitment to Michigan State Tuesday. “I’m proud to announce that I will be committing to Michigan State University,” Boakye said in an interview with CBS Sports’ Jon Rothstein Tuesday. “Michigan State has put a lot of time and effort into recruiting me. “Coach [Tom] Izzo flew down to Canada quite a few times to see me, even in the practice setting,” he said. “I heard that the first time he came to see me was the first time in 20 years he’s come to Canada to recruit a Canadian player.” Spartans legend Magic Johnson gave Boakye a shoutout on Twitter after his commitment.

He joins No. 1 overall prospect Emoni Bates as the second commit in Michigan State’s 2022 class. “They have been showing me love and I appreciate it,” Boakye said of the Spartans last month. They love how much of a presence I am as a big man and I would help them a lot.” Boakye chose Michigan State over offers from UCLA, Arizona, Oklahoma State, Texas A&M, Western Kentucky, Denver, Houston and BYU, among others. He has taken multiple unofficial visits to Michigan State and said last month that he is impressed by their NBA pedigree. “What stood out most was how many players they’ve sent to the NBA like Draymond Green,” he said. “They’re very united together. It’s a family, a big family. Especially their fans. Their fans are amazing, going to the student section. I can imagine myself or anybody else playing on that court as a wonderful experience.” According to 247Sports.com, Boakye is ranked as the No. 3 center and No. 18 overall player in the Class of 2022. At 6-foot-10, 240-pounds, Boakye describes himself as an ‘old school’ center. “I like contact,” he said. “I would say a mixture of Joel Embiid and Shaquille O’Neal. That’s the type of player I would say I am. Old school, I like the contact. I don’t shy away from it.” Follow Jacob on Twitter Follow Adam Zagoria on Twitter Follow ZAGSBLOGHoops on Instagram And Like ZAGS on Facebook