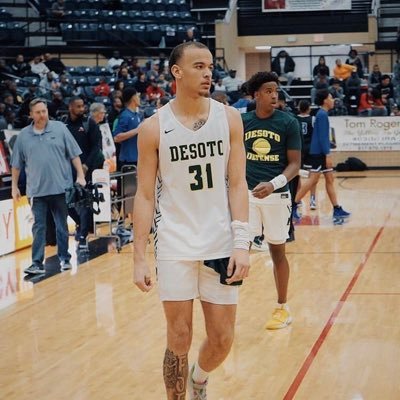 By JACOB POLACHECK Duncan Powell, the 6-foot-8, 220-pound small forward from DeSoto (TX), told ZAGSBLOG Wednesday that UTSA, Old Dominion and DePaul are the three schools recruiting him the hardest. He broke down each school: UTSA: “With UTSA especially, they’re looking into me having a very big role from every aspect, scoring, rebounding and being a leader. That’s really one of the biggest things for me and that’s why I’m very interested in them.” DePaul: “They’re in the Big East and run a real free-flowing type game. They let their wing players do what they have to do to be successful.” Old Dominion: “It’s kind of the same as UTSA in that it’s a high mid-major school that’s in need of a player of my versatility. That just would allow me to go there and produce as a freshman.  Powell says he plans on taking at least three official visits in the fall. “I plan on taking visits,” Powell said. “Will it happen? I’m not sure, but I’m most definitely planning on it. ” Powell currently has official visits planned to Tulsa (Sept. 4-6), UTSA (Sept. 11-13) and North Carolina A&T (Oct. 16-17). He broke down both Tulsa and North Carolina A&T: Tulsa: “I have a great relationship with [Shea] Seals. On my unofficial this past year, I met with coach [Frank] Haith. He’s a great coach. I really like the way he runs his system. With them, they really want me to be a high-major impact player from day one. That’s very, very appealing to me.” North Carolina A&T: “My cousin went there. I have a great relationship with coach [Ahmad] Dorsett and their head coach [Willie] Jones. We’ve just been talking about what I can bring to the table as far as producing, like with the other schools, as a freshman and what I can do for their program. On another level, we’ve been talking about what I can help do for the black community, same as Makur Maker just did.” Powell reiterated that he wants to take official visits this fall. “I want to, but I’m not going to stress over what I can’t control,” he said. “I feel like I’ll be able to, but I’m not worried. At the end of the day, it’s just a visit. I’m just going to play basketball. That’s what I really need to do.” Powell originally committed to Arkansas last September before de-committing this past April. He says he’s looking to make a decision around late-October or early-November. “I’m a very, very versatile player,” he said. “I can play the 1-5 positions if need be.” Powell also takes pride in his passing ability. “That’s one thing people overlook,” he said “No matter what team I’m on, I’m always going to have the most assists per game. That’s been a fact my whole life and it will continue to be a fact.” According to 247Sports.com, Powell is ranked as the No. 34 small forward and No. 139 overall player in the Class of 2021. Outside of basketball, Powell enjoys playing video games. “I’m a monster on Call of Duty,” he said. “I’m really, really good. That’s all I do is play Call of Duty, Modern Warfare, Warzones. You can ask anyone around Dallas.” This summer, Powell has also spent time working at a local Walmart. “I’m working at Walmart from 5-10 p.m., five days a week, so I’m always busy,” he said. “Whenever I’m at home, I get on the game and relax.” Follow Jacob on Twitter Follow Adam Zagoria on Twitter Follow ZAGSBLOGHoops on Instagram And Like ZAGS on Facebook

Franck Kepnang will remain in Class of 2021 and won't reclass