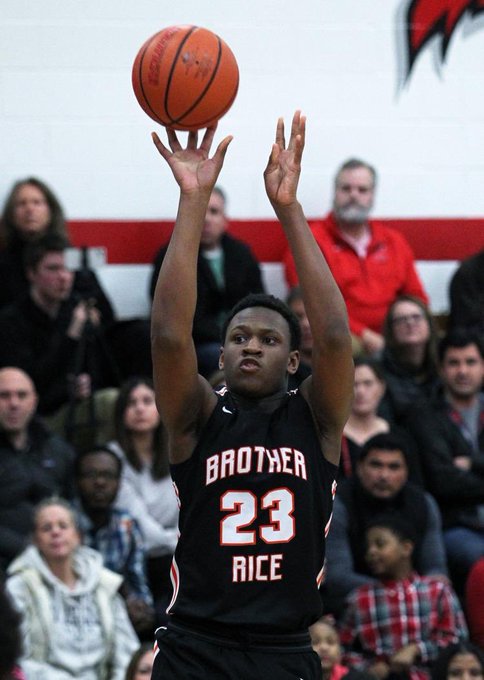 By JACOB POLACHECK Although he hasn’t been able to show his talents on the Nike EYBL Circuit this summer, Class of 2023 small forward Curtis Williams Jr. has been receiving high-major interest. Williams, the 6-foot-5, 180-pound small forward from Brother Rice (MI) High School and The Family Detroit AAU program, currently holds offers from Maryland and LIU Brooklyn. He broke down both schools for ZAGSBLOG Sunday: Maryland: “They [have] been telling me how good their facilities are and how they’re a winning a program all about defense. What appeals to me about them is how their team is very together and very competitive.” LIU Brooklyn: “I’ve been in contact with the coach for about two years. I got the offer after our last playoff game. They play very gritty and very together. That’s what I like best about both programs.” Williams has also received interest from Michigan, Michigan State, Louisville, Xavier, Marquette and Eastern Michigan. He took an unofficial visit to Michigan State on Feb. 15. “They have a great coaching staff and a great atmosphere,” Williams said. Williams was also in the process of planning visits to Louisville and Michigan before the COVID-19 pandemic put those plans on hold. He broke down both schools: Louisville: “I’ve been hearing that they want me to come on a visit this summer and that they have been watching me for a while now. I know that they are a great team in the ACC with a great coach.” Michigan: “They saw me play in the summer at their team camp and were very pleased with how I played. They are a great program with a new coaching staff and some great recruits coming in to get their program back to where it was.” Williams broke down what he’s looking at when evaluating the schools recruiting him: “[I’m looking at] what the program is offering me and is their program like a family, really together,” he said. According to ESPN.com, Williams is ranked as the No. 5 small forward and No. 17 overall player in the Class of 2023. “I was very excited that the people who made the list recognized the hard work I put in,” he said. In terms of his game, Williams describes himself as an “all-around player”. “I like to get my teammates involved and also like to score,” he said. “I would describe my game as kind of like Jayson Tatum.” Williams was originally set to play for The Family Detroit on the Nike EYBL Circuit this summer, but due to the coronavirus pandemic, Nike canceled the 2020 season. “My routine is waking up around 9 a.m., go workout with my school and then have a workout around 2 p.m.. Then have another one at 7 p.m.,” he said. “I have been working on getting my ball handling tighter and being able to get a consistent shot.” Photo: Endless Motor Sports Follow Jacob on Twitter Follow Adam Zagoria on Twitter And Like ZAGS on Facebook