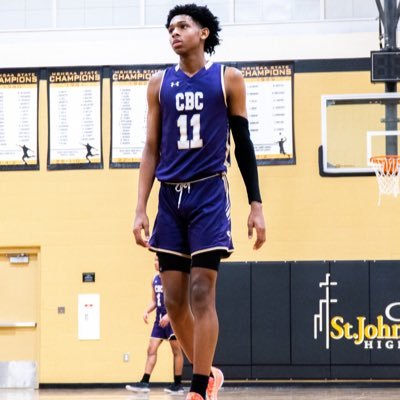 By JACOB POLACHECK Larry Hughes Jr., the 6-foot-4, 165-pound shooting guard from Christian Brothers (MO) College, says that he would like to take visits to Purdue, NC State, Kansas State and Ohio State. He broke down each school: Purdue: “They have been watching me for a little bit. They a have good program history, which is what I like.” NC State: “I like their offense. They have a fast tempo and a really nice arena. They’re in a good location, so there are a lot of good things about them.” Kansas State: “It’s kind of close to home. I know they had a lot of St. Louis guys go there and have success. They know how to coach.” Ohio State: “You know they have a couple St. Louis guys, so I’m learning more about them as we go on. In the past, they’ve had some success, but I’m just getting to know them more. Hughes’ only offer thus far is from Saint Louis, where his father played from 1997-98 before being drafted No. 8 overall in the 1998 NBA Draft. “They’ve shown interest for a very long time, probably since eighth grade, watching me play,” he said. “They said I have a really good IQ and have a good feel for the game. They’ll always be Top Five in my book.” Hughes’ father, Larry Sr. played 14 years in the NBA, including a stint with the Cleveland Cavaliers where he led the league in steals during the 2005 season. “He’s told me a lot of tips [during the recruiting process],” Hughes said. “First, hear from every coach and then later on you can narrow down who you talk to, who you’re in contact with. For now, take everybody’s calls and texts. He’s just been very supportive of me and helping me throughout this process.” According to 247Sports.com, Hughes is ranked as the No. 15 shooting guard and the No. 91 overall player in the Class of 2022. “I’m a 6-5 guard, so I can score the ball at all three levels,” he said. “I play defense very well. I’m long so I can get into passing lanes, get blocks, get steals. I’m really a two-way guard that can do everything.” 2022 SMALL FORWARD JORDAN WALSH HOLDS FIVE OFFERS Jordan Walsh, the 6-foot-6, 175-pound small forward from Waxahachie Faith (TX) Family Academy, currently holds offers from Texas Tech, Texas A&M, Texas, Arkansas and TCU. He broke down each school for ZAGSBLOG: Texas Tech: “The coach that was there is the first coach that ever gave me an offer. He was originally at A&M but then whatever happened and he ended up at Texas Tech. When he got there, he decided to give me an offer from there because he just liked me as a player. I just felt that’s important.” Texas A&M: “Coach Buzz [Williams] didn’t really know about me because the coaches that were there moved on elsewhere. He came in one day and was like ‘there’s this kid that they offered before I got here, well I like your game, so how about you hold onto that offer a little bit and consider us in the future?’ So that was pretty cool.” Texas: “They saw me working out and playing against other competition and they offered.” Arkansas: “They ended up offering me during quarantine, so I don’t know if they saw clips of me or watched film. They offered me. I talked to the assistant coach and head coach. I’m just trying to build a bond with them.” TCU: “I went to one of their camps and they saw me working hard, playing hard against other competition that they were interested in there. They thought I could be a good fit for the school and team.” Walsh, who is ranked by 247Sports.com as the No. 25 small forward and No. 77 overall player in the Class of 2022, has also received interest from Texas Rio Grande Valley, Purdue, BYU, Air Force and Florida. Walsh broke down what he’s looking for when evaluating these schools: “At first, I wanted to go out of state, but then I realized that they’re coming after me the hardest and if I stay here it might as well be near family,” he said. “Also, just the lifestyle around campus, where the campus is at and stuff like that. Things like that can help me with things outside of basketball, my friend groups and all that.” This season, Walsh helped lead his school to its first state title after dunking the game-winning bucket in a 53-51 win over Liberty Hill in the Class 4A final on March 9. “Since I hadn’t experienced high school yet, it felt like ‘okay this has got to be normal’. If I’m coming in freshman year this must be something that everyone has a chance to do,” he said. “Then, after I talked to coaches, they were like ‘you really think this is nothing. You just did something here. You made a name for us. “You made a name for the school. And you made history.’ At that point, I was just happy and glad that I had done this, but I knew there was more to come.” Follow Jacob on Twitter Follow Adam Zagoria on Twitter And Like ZAGS on Facebook