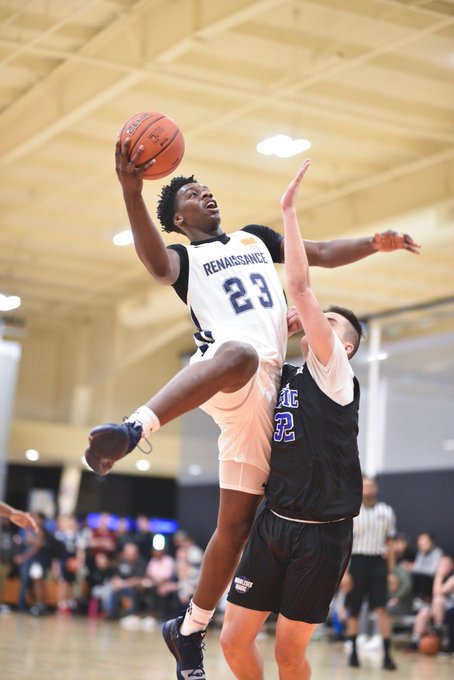 By JACOB POLACHECK Chisom Okpara, the 6-foot-7, 195-pound small forward from Vermont (VT) Academy, picked up an offer from Manhattan on Thursday. “It was me, my coach and the coach of Manhattan,” Okpara said. “He was just introducing himself and we were talking about the school. He just got right to the point and offered me.” Manhattan joins Brown, Bryant, Ole Miss, Iona and Howard as the sixth school to offer Okpara since Monday. “This week was really hectic,” he said. Okpara broke down his offers for ZAGSBLOG Thursday: Brown: “Brown is a really good academic school and it’s not too far away from my house. I’ve seen the campus before and I like the area.” Bryant: “I don’t know too much about the school, but we did see them play Dartmouth. They play a really fast tempo. I really like the coach and the way the team plays. “ Ole Miss: “It’s an SEC school. That’s a big conference and a big deal. Ole Miss has one of my favorite players, Devontae Shuler. I just like the way they play. I like the way they play man-to-man. The school is in the SEC, which is a good conference, big conference.” Iona: “They’re really like five minutes from my house. Iona college is not too far away. It’s a really nice campus. I like the area and they have Rick Pitino now. He’s a really good coach that has really good NBA connections. The school itself is not too far from home.” Howard: “HBCU school. Historically black school, great school. It’s located in D.C.. I have a lot of friends and family in D.C.. I just know that it’s a really nice school. I don’t know as much about the basketball. I would like to learn more about the basketball, but I know about the school itself. It’s got a lot of history.” In addition to his six offers, Okpara has also heard from a long list of schools since Monday: BYU, VCU, Providence, Marquette, Virginia Tech, East Carolina, Seton Hall, Pittsburgh, Columbia, Penn, UNC Charlotte, Elon, UConn, Oregon, Stanford, Princeton, Dartmouth and Ohio State. However, Okpara says two schools stood out the most. “The ones that stood out the most to me were Georgia and Vanderbilt,” Okpara said. He broke down both schools: Vanderbilt: “Assistant coach [Sha Brown] was the first to call me. We were just talking at 12 a.m. about non-basketball stuff, about life and what’s going on in the country and how COVID has impacted our lives. I want to take a visit to Vanderbilt for sure.” Georgia: “Head coach Tom Crean and their assistant coach continue to text and call me. They continue to send me articles and I just have engaging conversations with them.” Okpara says there are two main factors he’s taking into consideration when evaluating these schools. “The first being developing players,” Okpara said. “My goal is to get to the NBA and if I go to the right school, I know any school I go to will have great competition and if I go to right school with a coach that will develop me to the potential I want to be at, not only on the court but off the court. Does he show me how to prepare as an NBA player? “Secondly, a winning team with a winning background that has that mentality of always winning.” Okpara also says he’s looking for a school that plays a fast tempo and enjoys fast breaks. “I’m not saying I don’t like set plays, but I want to go to a school that runs the fast break,” he said. According to 247Sports, Okpara is ranked as the No. 1 player in the state of Vermont and the No. 86 overall player in the Class of 2022. Okpara describes himself as a versatile player and a good rebounder that likes to change the pace. “I’m a good rebounder and I like to change the pace,” Okpara said. “I’m very versatile. I can play the 1-4 positions. “At Vermont Academy, I could bring up the ball, run a play for coach,” he said. “If I have a bigger defender, I can take him out on the wing. If I have a smaller defender, I can post up and we can run a play for me that leads to me posting up a smaller defender.” Photo: Renaissance Hoops Follow Jacob on Twitter Follow Adam Zagoria on Twitter And Like ZAGS on Facebook