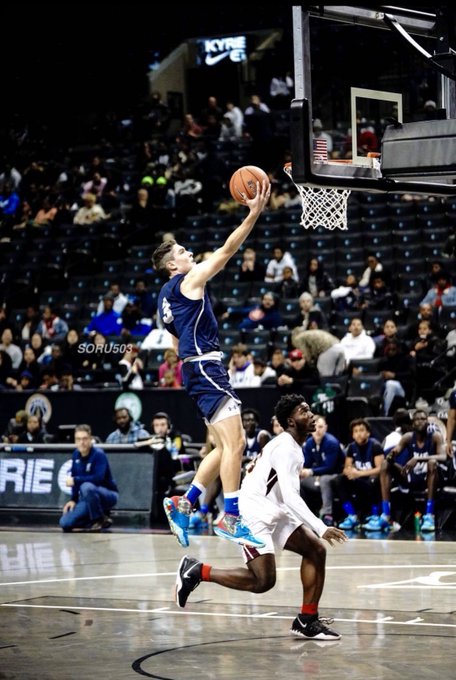 By JACOB POLACHECK Michael O’Connell is headed to Stanford, he told ZAGSBLOG Monday. O’Connell, the 6-foot-2, 175-pound point guard from Blairstown (NJ) Blair Academy, has de-committed and received out of his Letter of Intent with Maryland Lacrosse, instead opting to sign with Stanford Basketball. “[It was a] tough decision, that’s for sure,” O’Connell said. “I spoke to the Maryland lacrosse coach John Tillman and he said that understood the opportunity to play basketball at Stanford and that basketball was always my first love.” O’Connell joins Ziaire Williams, Max Murrell, Noah Taitz and Brandon Angel as the fifth commit in Stanford’s 2020 class. “I’m excited about the opportunity to receive a world-class education at Stanford while playing for Coach [Jerod] Haase and for the opportunity to win a Pac-12 Championship,” O’Connell said. After transferring to Blair Academy from Mineola (NY) Chaminade for his senior year, O’Connell broke through on the basketball court, opening the opportunity to play high-major basketball. “Michael was one of the top 10 most impactful winners to ever wear a Blair Basketball uniform in my 21 years of coaching at the school,” Blair Academy coach Joe Mantegna told ZAGSBLOG Monday. “The kid never seems to have a bad day in terms of effort, concentration or selflessness. When you look at guys who impact winning both in a statistical way and in terms of intangibles – Michael is your guy.” Michael’s brother, Thomas, won a lacrosse championship at Maryland and then transferred to St. John’s for the 2019-20 season after his eligibility expired as a graduate student. He walked on to the basketball team and eventually earned a scholarship. “Basketball has always been our favorite,” Michael said. “My two uncles and aunt played basketball in college, and my grandfather was a basketball referee for 35 years in Brooklyn, Queens and Long Island.” O’Connell describes himself as an “old school, pass first point guard that likes to defend”. “I think I will fit in,” he said. “Coach [Jerod] Haase says that I remind him of himself when he played basketball in college. They share the ball and make the extra pass on offense. They pride themselves on playing tough defense.” Follow Jacob on Twitter Follow Adam Zagoria on Twitter And Like ZAGS on Facebook