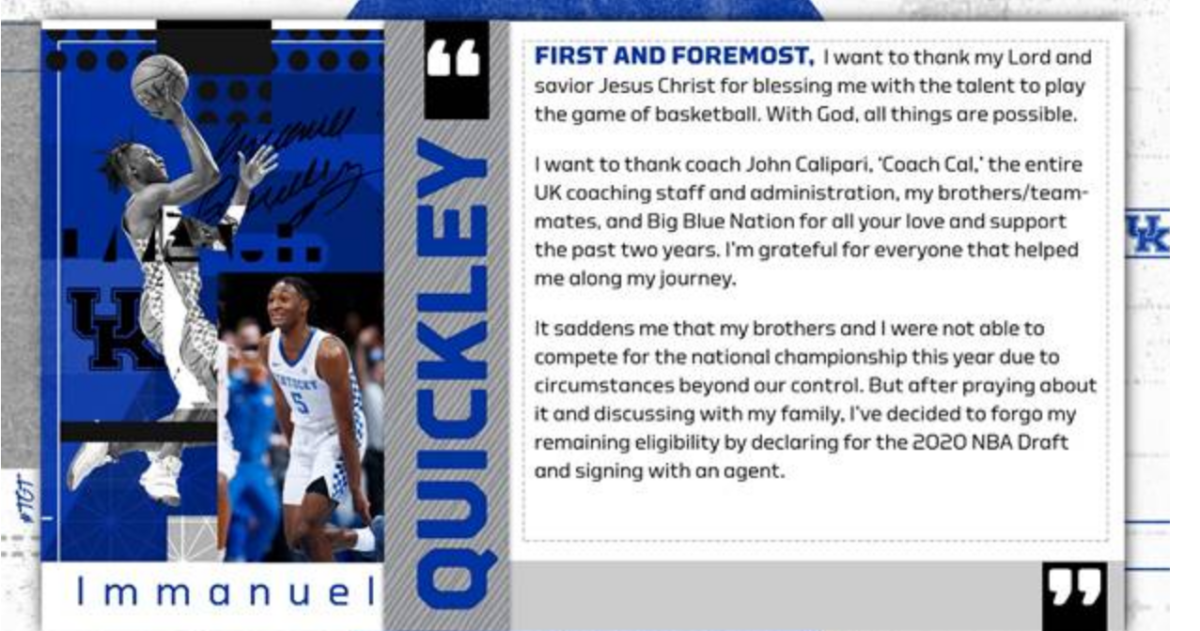 **UPDATE 3/14 – Nick Richards has declared for the NBA Draft. Read more here** By ADAM ZAGORIA Kentucky sophomore guard Immanuel Quickley became the latest Wildcat to declare for the NBA Draft on Monday, and junior Nick Richards will also declare, sources said. Quickley joins freshman Tyrese Maxey and sophomore Ashton Hagans among Kentucky players who have declared for the 2020 draft. According to the latest ESPN.com mock draft, Maxey is projected as the No. 12 pick, Hagans is No. 53, Richards is 57 and Quickley 58. Due to the coronavirus pandemic, the Draft may not happen until August or September. Quickley was named the 2020 Southeastern Conference Player of the Year while leading the Wildcats at 16.1 points per game. He ended the season on a 20-game double-figure scoring streak. “First and foremost, I want to thank my Lord and savior Jesus Christ for blessing me with the talent to play the game of basketball,” Quickley said, according to a Kentucky release. “With God, all things are possible. “I want to thank coach John Calipari, ‘Coach Cal,’ the entire UK coaching staff and administration, my brothers/teammates, and Big Blue Nation for all your love and support the past two years. I’m grateful for everyone that helped me along my journey. “It saddens me that my brothers and I were not able to compete for the national championship this year due to circumstances beyond our control. But after praying about it and discussing it with my family, I’ve decided to forgo my remaining eligibility by declaring for the 2020 NBA Draft and signing with an agent.” Quickley was named an All-American by several outlets after a breakout 2019-20 campaign. The Athletic, CBS Sports and Bleacher Report all tabbed the sophomore guard with All-America Third Team distinction. “Immanuel was an absolute pleasure to coach over the last two years,” Calipari said. “I had as much fun coaching him and watching him grow than just about any player I’ve ever coached. Like some of our other guys that have gone on and done special things, like Shai Gilgeous-Alexander and Tyler Herro, he absolutely works his tail off. He takes his conditioning seriously, has unbelievable discipline, unwavering faith, confidence and spent just about all of his extra time in that gym. “His reward: SEC Player of the Year, as voted on by the coaches. I’ve been in this league for 11 years and only had that happen three other times. Think about that with some of the kids we’ve had go through here. “There’s no question in my mind that his growth in the NBA will be on the same path that it was here, which is steep. He is a wonderful, centered young man who has fought his way to the point of being a first-round draft pick. I’m looking forward to seeing what he does on that next level.” As for Richards, the 6-11 big man improved dramatically this season, averaging 14.0 points, 7.8 rebounds and 2.1 blocks after averaging 4.0 points, 3.3 rebounds and 1.3 blocks as a sophomore. As reported here earlier this season, Richards, a native of Jamaica who picked up the game late in life, impressed NBA scouts with his play this season. “He’s starting to wow people, great game tonight,” one NBA scout said. “I love his energy level and he has good lateral quickness for his size.” Since Calipari joined the Kentucky program for the 2009-10 season, the school has produced 38 NBA Draft picks over 10 seasons, more than any other school. Included in the 38 are 29 first-rounders, three No. 1 overall picks and 21 lottery selections. (Kentucky press release material included) Follow Adam Zagoria on Twitter And Like ZAGS on Facebook