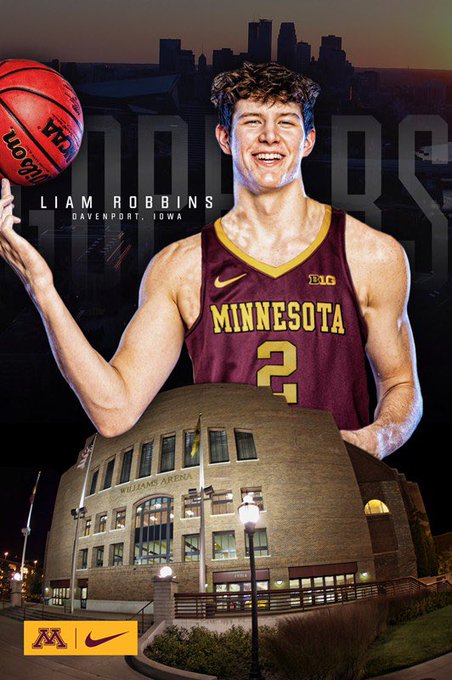 By JACOB POLACHECK Just one day after announcing his intentions to transfer from Drake, Liam Robbins has committed to Minnesota. Robbins, a 7-foot, 235-pound sophomore center from Davenport, Iowa, announced his commitment on Sunday, via Twitter. “After talking with Coach [Richard] Pitino last night and extensively today, I feel that the University of Minnesota offers me the best opportunity to play basketball at a high level and be surrounded by family during these unprecedented times,” Robbins said via Twitter. Robbins is the nephew of Minnesota Associate Head Coach Ed Conroy. Last season, Robbins averaged 14.1 points and 7.1 rebounds per game, while shooting 49.9 percent from the field. He was named to the Missouri Valley Conference Men’s Basketball All-Tournament Team after averaging 18 points, 8.7 rebounds and 3.0 blocks a game during the MVC Tournament. As a freshman, Robbins averaged 4.1 points and 2.7 rebounds per game. Follow Jacob on Twitter Follow Adam Zagoria on Twitter And Like ZAGS on Facebook