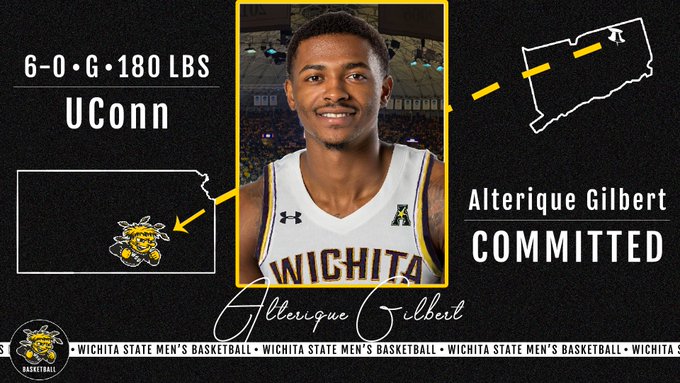 By JACOB POLACHECK UConn grad transfer Alterique Gilbert is transferring to Wichita State, he announced Saturday via Twitter. “I’m excited to announce that I will be attending Wichita State University this fall,” Gilbert said, via his Twitter account. “Let’s go Shocker nation!!!” Gilbert, a McDonald’s and Jordan Brand all-American, came to UConn as a freshman in 2016, but was limited by shoulder injuries, which required three surgeries. He only played nine games in his first two seasons. As a junior in 2018-19, Gilbert had his best year, averaging 12.6 points, 2.9 rebounds and 3.6 assists in 25 games. As a senior this past season, Gilbert posted averages of 8.5 points, 2.6 rebounds and 3.8 assists per game in 30 games. Wichita State has had eight players leave the program since the abrupt end to the 2019-20 season in Morris Udeze, Erik Stevenson, Jamarius Burton, Grant Sherfield, Noah Fernandes, DeAntoni Gordon, Tate Busse and Asbjorn Midtgaard. JaDun Michael is the only other commit in the Shockers’ 2020 class. Follow Jacob on Twitter Follow Adam Zagoria on Twitter And Like ZAGS on Facebook