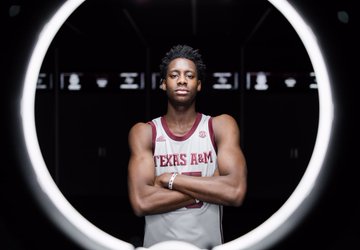 By JACOB POLACHECK Manny Obaseki, the 6-foot-2 combo guard from Allen (TX), announced his commitment to Texas A&M on Tuesday, via Twitter. “[It came down to] just the situation and their belief in me,” Obaseki told ZAGSBLOG Tuesday via text. “It meant a lot and they’re gonna build around me.” He took an unofficial visit to Texas A&M this past weekend (Mar. 7). He broke down what stood out to him on his visit: “Just the staff and the environment,” Obaseki said.”It’s beautiful and I love it there, as well as the development.” Obaseki chose Texas A&M over schools such as Oklahoma, Arkansas, Oklahoma State, Texas, TCU, SMU, Baylor and Alabama. He took his first and only official visit to Oklahoma Feb. 7-9, but ultimately chose to commit to the Aggies. “It’s the perfect fit,” Obaseki said. “They play fast, free with a lot of real basketball being played to get buckets.” He joins Jaxson Robinson as the second commit in the Aggies’ 2021 class. “They’re a great program that inspires their players, developing them and getting them better,” Obaseki told ZAGSBLOG last month. “They’re building a culture over there right now that’s getting ready to take off with Coach Buzz [Williams].” According to 247Sports, Obaseki is ranked as the No. 28 overall player in the Class of 2021 and the No. 3 ranked combo guard. This story has been updated. Follow Jacob on Twitter Follow Adam Zagoria on Twitter And Like ZAGS on Facebook