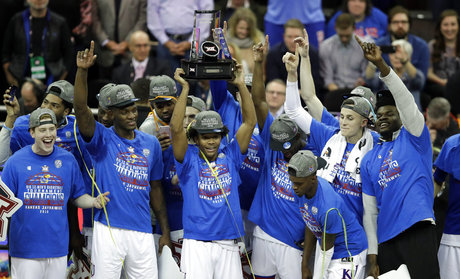 For the 10th consecutive year, CBS Sports and Turner Sports will provide live coverage of all 67 games from the 2020 NCAA Division I Men’s Basketball Championship across four national television networks – TBS, CBS, TNT and truTV – with all games streamed on NCAA March Madness Live. TBS will televise the NCAA Final Four® National Semifinals on Saturday, April 4, and then the National Championship on Monday, April 6, from Atlanta. This marks the fifth time that Atlanta will host the Final Four and the first time since 2013. Saturday’s on-site Final Four studio coverage airing on TBS will begin with At the Final Four presented by Nissan from 3-4 p.m. ET, followed by the Final Four Show from 4-6 p.m. The Capital One Championship Central pregame show will air on Monday at 7 p.m., leading into the National Championship game. Additionally, Turner Sports and CBS Sports will offer team-specific, originally produced telecasts of the National Championship and Final Four National Semifinals with the return of “TeamCast” presentations on TNT and truTV. TeamCasts are tailored specifically for each of the teams competing. The six unique telecasts will feature separate announce teams and multiple viewing options highlighting each of the competing schools. The Regional Final games will once again be split by CBS and TBS. TBS will air the games on Saturday, March 28, beginning at 6 p.m., while CBS will broadcast the games on Sunday, March 29, starting at 2 p.m. Coverage of the 2020 Division I Men’s Basketball Championship will begin with a one-hour Selection Show on Sunday, March 15, from 6-7 p.m. on CBS. NCAA Tournament game action will tip off with the NCAA First Four™ on truTV Tuesday, March 17, and Wednesday, March 18, with coverage beginning at 6 p.m. both nights. Additional highlights (complete telecast schedule attached): CBS Sports and Turner Sports will also return March Madness Confidential, providing exclusive, behind-the-scenes access of select NCAA Tournament teams, with features airing during studio coverage and NCAA.com, to chronicle their Tournament journeys. Turner Sports and CBS Sports will again present integrated game and studio productions with pregame, halftime, bridge and postgame shows from studios in New York and Atlanta. Studio shows will include The Road to the Final Four®and Nissan NCAA Tip-Off pregame shows, AT&T at the Half, Capital One Tournament Central and the Inside March Madness® presented by Buick postgame show. Accompanying the live television presentation, NCAA March Madness Live will once again be the ultimate digital destination for direct access to all 67 games of the NCAA Division I Men’s Basketball Championship.  Additionally, social integrations will include the latest highlights, behind-the-scenes content and news updates across the official March Madness Twitter, Facebook, Instagram and Snapchat accounts for companion content throughout the tournament. CBS will televise the NCAA Final Four National Semifinals and National Championship in 2021, with the events alternating between Turner Sports and CBS Sports each year throughout the partnership.

Naismith Player of the Year Semifinalists Have Been Named