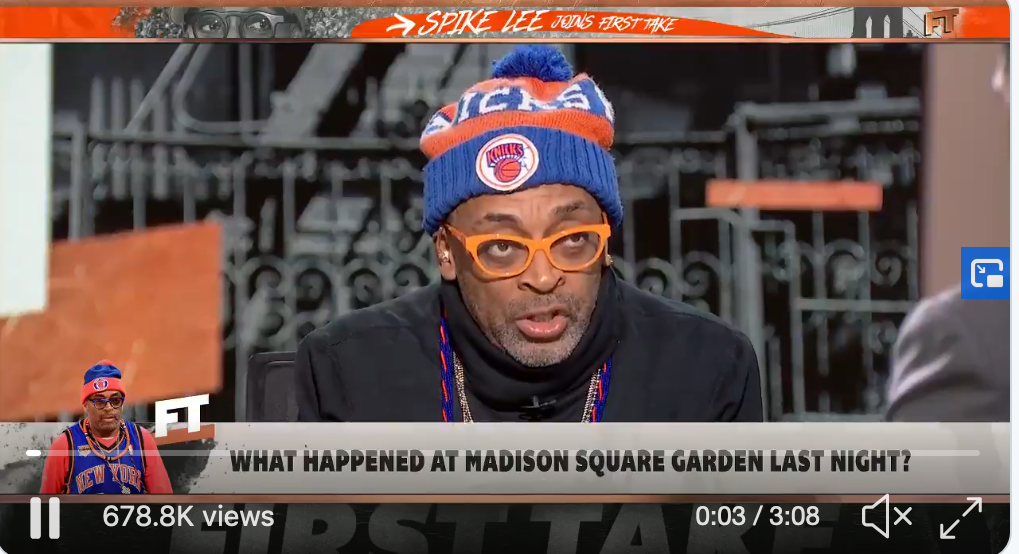 By ADAM ZAGORIA After starting a feud with Knicks legend Charles Oakley in 2017, Knicks owner Jim Dolan has now launched into one with the team’s biggest fan: Spike Lee. The acclaimed director of “She’s Gotta Have It,” “Do The Right Thing” and “Malcolm X” said Tuesday on ESPN’s “First Take” that he’s “done” attending Knicks games this season after Tuesday’s altercation with Dolan and his security team. “I’m coming back next year, but I’m done for the season,” he said on ESPN. Lee entered Madison Square Garden Monday night through an employee entrance on 33rd St. he’s used for 28 years. After his ticket was scanned and he tried to get off on the fifth floor where the court is, security asked Lee to leave the Garden and re-enter via 31st St.. He said he put his hands behind his back and told them, “Arrest me like my brother Charles Oakley.”

After getting to his seat, Lee said Dolan approached him and said, “We have to talk.” “Mr. Dolan, I don’t want to talk about anything,” Lee said he told the owner.

“I’m being harassed by James Dolan. I don’t know why.”

ESPN’s Stephen A. Smith also told Smith that he had purchased approximately $300,000 worth of Knicks tickets annually for 30 years, which amounts to nearly $10 million. “I look stupid now,” Lee said.

Spike Lee’s response when finding out he spends roughly $300K a year on Knicks tickets and has given them almost $10M over 30 years:

The incident happened on the first night after new president Leon Rose took over. Rose, who spoke to the team prior to the game, was not made available to the media. The Knicks have yet to publicly address the incident, but did release a statement Tuesday. “The idea that Spike Lee is a victim because we have repeatedly asked him to not use our employee entrance and instead use a dedicated VIP entrance – which is used by every other celebrity who enters The Garden – is laughable,” the team said.  “It’s disappointing that Spike would create this false controversy to perpetuate drama. He is welcome to come to The Garden anytime via the VIP or general entrance; just not through our employee entrance, which is what he and Jim agreed to last night when they shook hands.”