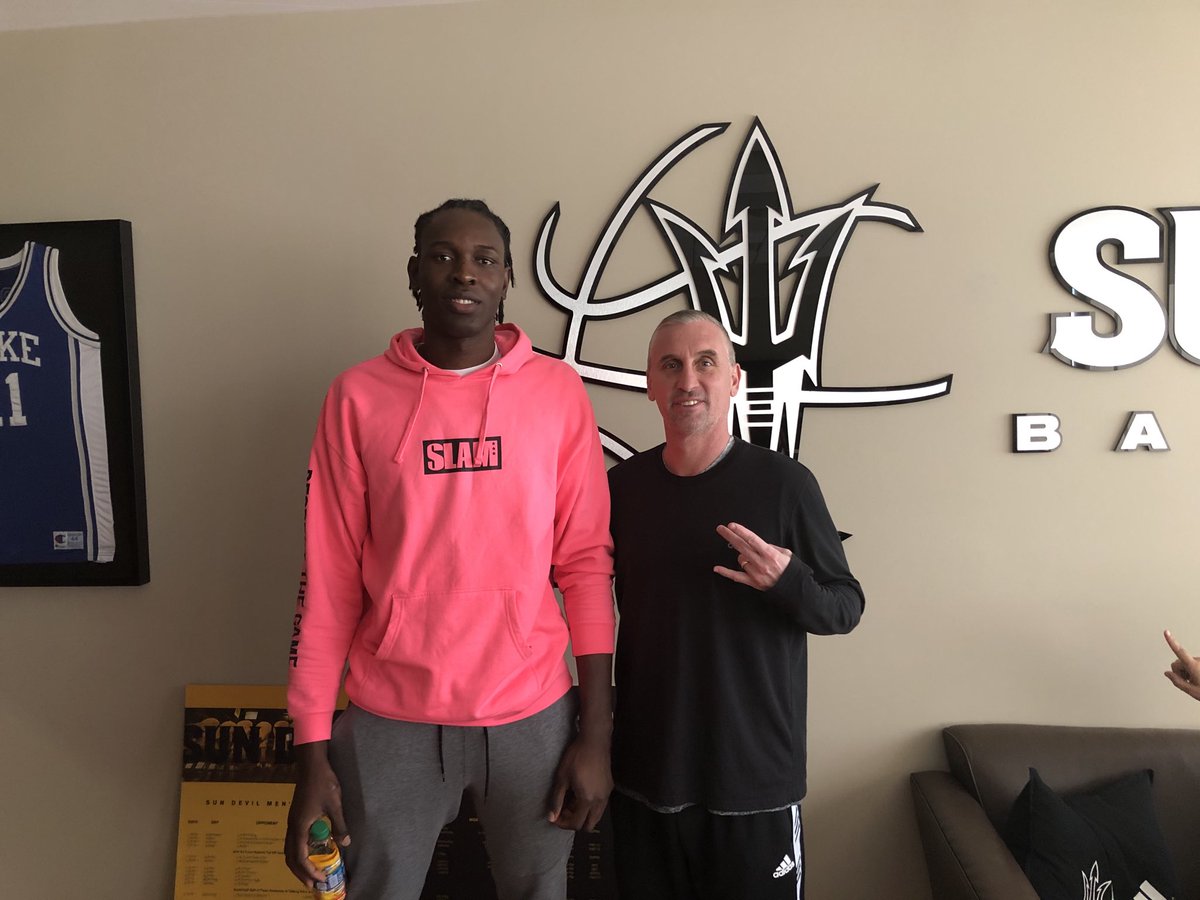 By ADAM ZAGORIA Cliff Omoruyi , the 6-foot-11, 236-pound big man from Roselle (N.J.) Catholic, came away feeling needed after his second official visit to Arizona State this week. Omoruyi visited the Pac-12 school from Tuesday-Thursday and was on hand for Arizona State’s 77-72 win over No. 14 Oregon Thursday night. It was the sixth straight win for Bobby Hurley’s club, which is now 18-8, 9-4 in the Pac-12. “The game was fun,” Omoruyi said by text. As for ASU’s message, he added, “That they need me in their program since I’m the guy who likes winning and [Hurley] wants to win also.” Omoruyi also has a relationship with assistant coach Rasheen Davis, who began recruiting him at UMass and went to school in New York with one of Omoruyi’s guardians, both of whom made the trip with him.

Omoruyi’s camp is also in touch with coaches from Rutgers, Kentucky and UConn regarding official visits. He has already taken an official to Auburn, and has visited both Rutgers and UConn several times unofficially. The next official visit is expected to come to Rutgers, but no date has yet been set. The Roselle (N.J.) Catholic big man officially announced a final five of Arizona State, Auburn, Kentucky, Rutgers and UConn. That makes two Hurley brothers — Danny and Bobby — involved in his recruitment, along with Auburn’s Bruce Pearl, Kentucky’s John Calipari and Rutgers’ Steve Pikiell.

RC coach Dave Boff said although Omoruyi is known as a shot-blocker and dunker, he continues to expand his game offensively. “Cliff is really improving by leaps and bounds all the time,” said Boff, whose program has won three TOC titles since 2013. “I’m fairly certain he’s the premier defensive player in the state of New Jersey and might be the best defensive player we’ve ever had here, which is saying something. “The way he rebounds the ball, the way he blocks shots, the way he helps us when we make mistakes on the perimeter really saves us and then offensively he’s continued to improve his game. He’s expanded his back-to-the basket game and added a 15-footer. He can do a lot of stuff on the offensive end and we have to do a good job of getting him the ball here the rest of the way.” Omoruyi says he can shoot the 3-ball, too, but isn’t emphasizing that now. “I can shoot the 3 but now it’s not my strong point,” he said. “I get inside close to the basket.” Meantime, academics will play a very important role in Omoruyi’s college decision. He wants to study engineering in college “Yes it’s important to me and it’s important to my coach,” he said. “Every time that’s the first thing I ask about, engineering, about alumni.” Said Boff: “I think it’s hugely important. It’s something he’s really going to look into. “Every conversation I have with him about the colleges, he’s always talking about who has the engineering program that he’s looking for and who can help him achieve those goals off the court. So I think that’s something that’s going to be very important when push comes to shove and I think he’s going to make a great decision for him and his family.” This story has been updated. Follow Adam Zagoria on Twitter And Like ZAGS on Facebook