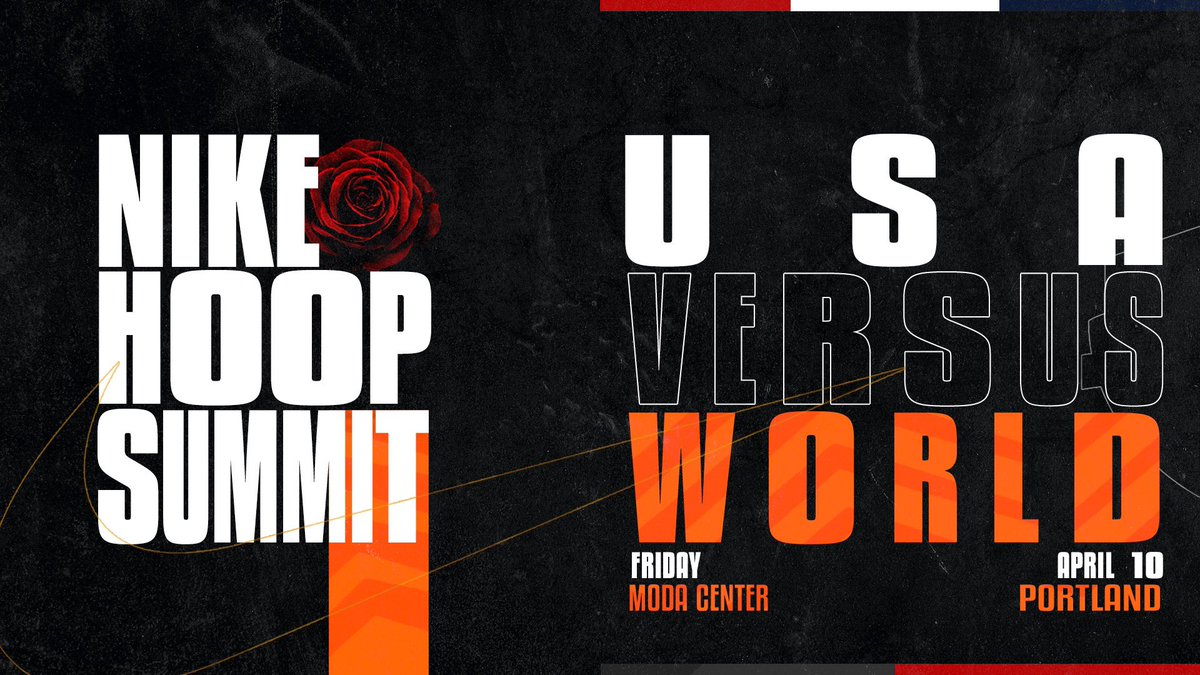 Nothing else to say. This team 🔥🔥🔥

The Nike Hoop Summit is an annual basketball game that pits top U.S. high school senior boys against a World Select Team comprised of elite international players who are 19 years old or younger. Also suiting up for USA Basketball will be Joshua Christopher (Mayfair H.S./Lakewood, Calif.); Jalen Green (Prolific Prep/Fresno, Calif.); Adam Miller (Morgan Park H.S./Chicago, Ill.); Evan Mobley (Rancho Christian H.S./Temecula, Calif.); Jeremy Roach (Paul VI Catholic H.S./Leesburg, Va.); Jalen Suggs (Minnehaha Academy/Minneapolis, Minn.); and Ziaire Williams (Sierra Canyon School/Sherman Oaks, Calif.). Three gold-medal winning coaches will lead the 2020 USA Nike Hoop Summit Team, headed by Sharman White (Pace Academy, Ga.) with assistants Scott Fitch (Fairport H.S., N.Y.) and Stan Waterman (Sanford School, Del.). Tickets are on sale at Ticketmaster.com or the Rose Quarter Box Office. Courtside seats are available for $60, and lower bowl seating starts at $10. Applicable service charges apply. “I feel that this is a very strong roster,” White said. “This group of players is filled with talent and young men who love playing the game. I believe one of our strengths is versatility. We have a lot of guys that can play multiple positions. And, we have depth at key positions. This group also boasts a lot of proven winners. They have either won with USA Basketball, or they have won at their high schools or in summer basketball.” Barnes, Green and Suggs won gold medals at the 2019 FIBA U19 World Cup, 2018 FIBA U17 World Cup and 2017 FIBA Americas U16 Championship, and Green was named MVP in 2018. Mobley won gold at the 2019 FIBA U19 World Cup and 2018 FIBA U17 World Cup, and Roach earned gold at the 2018 FIBA U17 World Cup and 2017 FIBA Americas U16 Championship. Cunningham and Williams also helped USA Basketball to gold medals at the 2019 FIBA U19 World Cup. Christopher has taken part in four USA Basketball training camps, including being named a finalist for the 2019 U19 and 2018 U17 teams; Kessler was a finalist for the 2019 U19 team and also took part in two other USA Basketball training camps; Love has attended five USA Basketball training camps; Miller has attended four camps and was a finalist for the 2018 U17 team; and Sharpe participated in his first USA Basketball event at the 2019 USA Basketball Men’s Junior National Team October minicamp. While Christopher, Green and Williams have not yet committed to a college or university; Barnes signed a National Letter of Intent with Florida State University; Cunningham signed with Oklahoma State University; Kessler, Love and Sharpe signed with the University of North Carolina; Miller verbally committed to the University of Illinois; Mobley signed with the University of Southern California; Roach signed with Duke University; and Suggs verbally committed to Gonzaga University. All 12 athletes are ranked in the top 29 according to the ESPN Class of 2020 rankings. Mobley is No. 1; Cunningham is No. 2, Green is No. 3, Williams is No. 5, Suggs is No. 6, Barnes is No. 8, Christopher is No. 11, Sharpe is No. 14, Kessler is No. 15, Love is No. 18, Roach is No. 22 and Miller is No. 29. The 2020 USA Nike Hoop Summit Team athletes and coaches were selected by the USA Basketball Men’s Developmental National Team Committee. The 2020 World Select Team is expected to be announced in March and will draw players from FIBA Africa, FIBA Americas, FIBA Asia and FIBA Europe, with approved sanction of FIBA, the governing body of international basketball. Overall, the USA holds a 15-7 series advantage in the Nike Hoop Summit. In 2019, the USA got 25 points from current University of North Carolina freshman standout Cole Anthony to help the Americans to a 93-87 win, despite 28 points from the World Team’s Nico Mannion, who is a freshman at the University of Arizona in 2019-20. An incredible 229 Nike Hoop Summit alumni have been drafted by NBA teams, including 12 players in the 2019 NBA Draft. And, as of Nov. 6, 2019, a remarkable 115 Nike Hoop Summit alumni were active in the NBA, including 79 former U.S. players and 36 former World team members. Additionally, 35 former Hoop Summit players are competing on the collegiate level in 2019-20, including 22 U.S. players and 13 World Team athletes. Follow Adam Zagoria on Twitter And Like ZAGS on Facebook