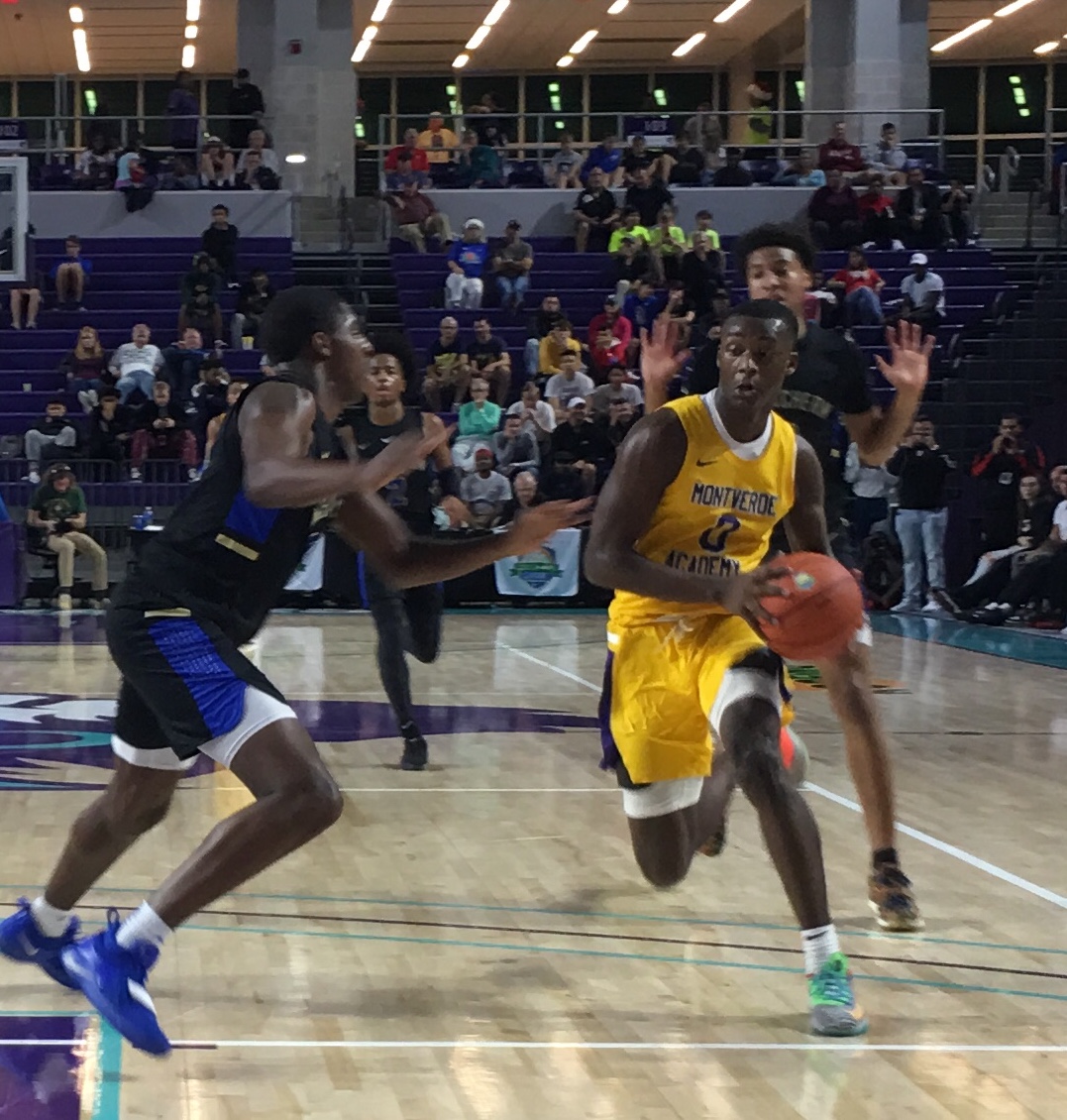 By SETH SOFFIAN FORT MYERS, Fla. — It’s only because of his team’s embarrassment of riches that Montverde (FL) Academy sophomore Dariq Whitehead could possibly be at all overshadowed. When it comes to the increasing likelihood of the NBA’s one-and-done rule being scrapped in time for the 2022 Draft, however, the five-star guard quickly becomes a top attraction. Thoughtful, poised and a consistently maturing threat in all phases of the game, the 6-5, 190-pound Newark, N.J., native acknowledged to ZAGSBLOG last week that being in the first class to potentially revive the straight-to-the-NBA path is very much an option. “Obviously coach Boyle talks to me a lot about it,” Whitehead said of Montverde coach Kevin Boyle, whose track record includes six top-three NBA Draft selections since 2011 – more than any coach in that span other than Duke’s Mike Krzyzewski. “But it’s not something I’m focused on right now. I’m just trying to get better. I feel like without me getting better, that wouldn’t even be in the conversation. I have a lot of stuff to work on skill-set wise, mentally, physically.” Michigan’s Emoni Bates and Delaware’s Jalen Duren headline the Class of 2022 stars who could go straight from the preps-to-the-pros if the rule changes. “I think it’s going to be a monumental draft class, potentially a generational class,” Rivals.com recruiting analyst Corey Evans told Yahoo Sports this summer. “The infiltration of the one-and-done class from 2021 and the potential of the straight-to-the-pros group makes it a tsunami of talent, like two draft classes in one.” The younger brother of Oakland Raiders linebacker Tahir Whitehead, Dariq Whitehead is ranked in the top 15 in the 2022 class by Rivals (No. 5), ESPN (8) and 247Sports (15). He holds offers from Seton Hall, Rutgers, Louisville, LSU, West Virginia, USC, Arkansas-Little Rock and others, and he recently picked up an offer from Oklahoma State, where Montverde teammate and 2021 projected No. 1 overall pick Cade Cunningham is going next year. Whitehead said he has no early leaders among college suitors, and that his brother, who played football at Temple and was drafted by Detroit in the fifth round in 2012, helps him in the evaluation process. But that’s if he even goes to college. “There will probably be five to seven guys in that class that get picked,” Boyle said. “I think if he keeps progressing, he’s got a good chance to be one of them.” Whitehead, who transferred to Montverde for the end of his eighth-grade season, is still only 15 and will only be 17 at the time of the 2022 Draft, Boyle said. “Nothing is guaranteed,” Boyle said. “He still has a lot of developing to do. His handle has got to get better. He’s got to get a little more point-guard-ish. Right now he’s a good shooter. He’s got to become a very good shooter. And he’s got to be focused consistently on defense.” Whitehead, a participant in multiple USA Basketball Junior National Team camps, started three of four games for consensus top-ranked Montverde in route to the title last week in the City of Palms Classic in Fort Myers, Fla. He averaged 15 minutes a game and totaled 34 points over the four games on 10-of-26 shooting, including 6-of-12 on 3-pointers and 10-of-13 at the charity stripe. He totaled seven assists against just two turnovers and had nine rebounds, three steals and four blocks. In a 63-55 title-game win over No. 6 IMG Academy (FL) Monday night, Whitehead came off the bench and had the game’s best plus/minus ratio, a plus-10. “He’s matured a lot each year,” Boyle said. “He’s just grown up each year. He’s becoming more and more humble, more and more coachable and more and more disciplined.” Whitehead said his transition to Montverde was difficult initially, even with talents such as R.J. Barrett, this year’s No. 3 overall pick by the Knick, to learn under. “I thought I was going to play right away,” he said. “I didn’t realize how good those guys were. I had to sit, watch, learn. It helped me a lot. I honestly don’t think I would be where I am right now if it wasn’t for me learning behind a lot of guys.” Said Boyle: “He’s close in a lot of areas. If he keeps working, stays humble, I think you’re going to see when he’s a senior he could be one of the highlight guys in the country getting over the rim and dunking.” Photo: Seth Soffian Follow Seth on Twitter Follow Adam Zagoria on Twitter And Like ZAGS on Facebook