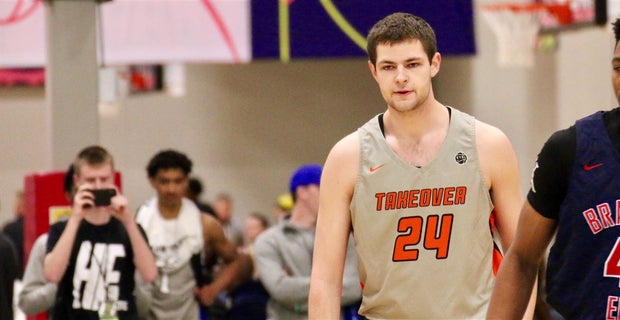 By JACOB POLACHECK Hunter Dickinson, the 7-foot-2 center from DeMatha Catholic (MD), committed to Michigan on Friday. Dickinson had recently cut his list to Duke, Michigan, Notre Dame and Florida State. “[I like] how much coach [Juwan] Howard loved Michigan, his passion and energy for the university,” Dickinson said. “He’s someone i want to play for and be coached by.” According to 247Sports, Dickinson is ranked as the No. 6 center in the Class of 2020. “Hunter is an old school post that can thrive in the new-school game,” DeMatha coach Mike Jones said. “He is comfortable being a back-to-the-basket post player who, as a lefty, can score with both hands. But he also has expanded his game to the perimeter where his IQ and passing ability separate him from other posts. Along with his ability to shoot the 3, Hunter can truly impact any type of game.” Said Team Takeover coach Keith Stevens: “Hunter is a high-IQ player. His IQ is usually one of the highest whenever he steps on the court. I honestly see him playing basketball one day in the Association.” Dickinson joins point guard Zeb Jackson and power forward Isaiah Todd in Juwan Howard’s 2020 class.

I will be committing to… pic.twitter.com/31zz80lCbg