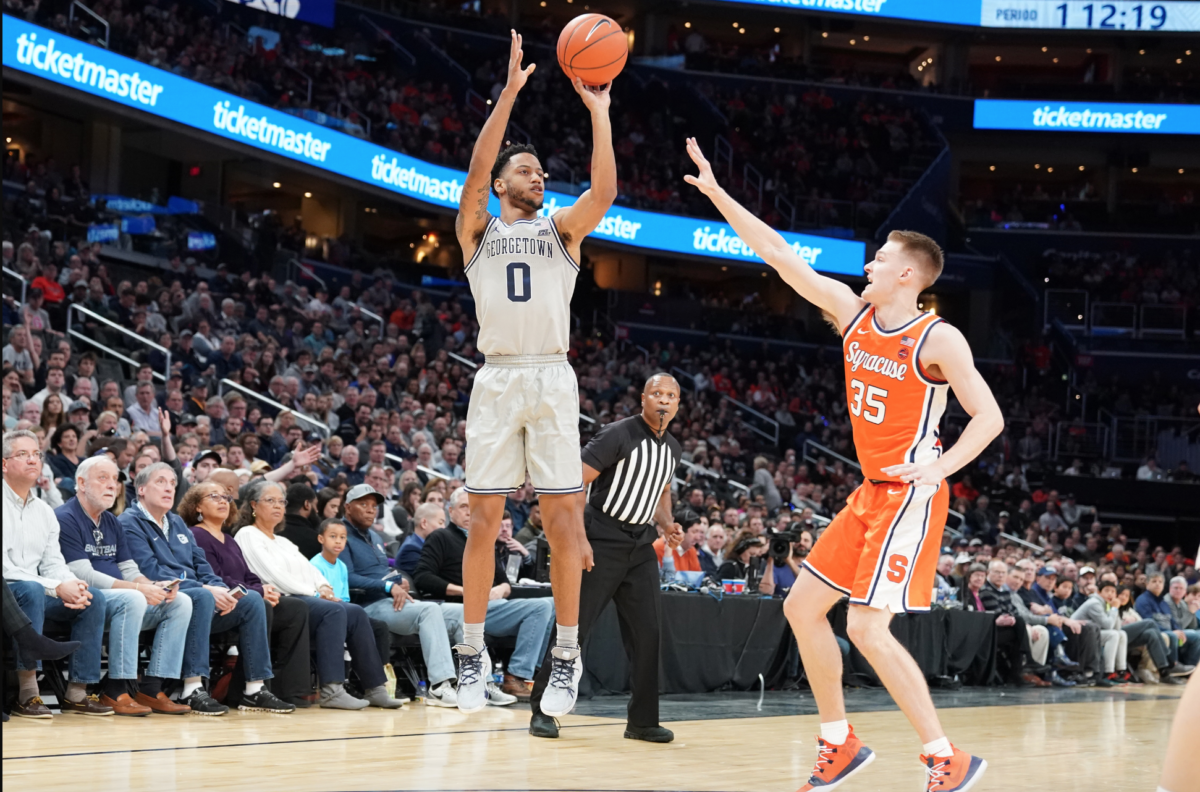 By: JAMES SZUBA WASHINGTON, D.C.— In an old Big East rivalry game between Georgetown and Syracuse, the Hoyas emerged as the victor over the Orange at Capital One Arena by a final score of 89-79 on Saturday. The Georgetown win comes on the heels of recent roster attrition in the month of December, as James Akinjo and Josh LeBlanc were dismissed from the team earlier in the month while Galen Alexander and Myron Gardner followed suit on Friday. On Dec. 2, Georgetown announced that Akinjo and LeBlanc would no longer be playing basketball at GU. LeBlanc and Alexander were named in two reports which included allegations of burglary and threats of assault. LeBlanc, Alexander and Gardner were named in a second report which included allegations of sexual harassment and assault. Akinjo has not been named in either report. With that, the Hoyas lost four players in two weeks, and were down to just nine scholarship players before playing Syracuse, two of whom had not played this season. “It has been a difficult week,” Patrick Ewing said after his team improved to 3-0 following the scandal. “A lot of things have happened a lot of things have were swirling around. But I thought my guys stepped up. They played extremely well.” Georgetown was able to get dribble penetration against Syracuse’s 2-3 zone and knock down shots from the perimeter. The Hoyas controlled the boards and sophomore guard Mac McClung erupted for 26 points. “I mean I think that’s what happens when you face challenges. You either break apart or come together and I think we’ve come together,” McClung said. Syracuse head coach Jim Boeheim said he thinks Georgetown has a good team this year, and suggested that the Hoyas might be even better now after losing Akinjo. “They got rid of a guy that wouldn’t pass the ball to anybody and just shot it every time, and that’s why they’re good now,” Boeheim said of Akinjo, who visited Arizona Saturday night for that team’s loss to Gonzaga. “They’ve got seven guys that are as good as anybody’s. Two guys weren’t really contributing at all and that one guy was just throwing the ball up all the time. I know Patrick can’t say that but I can. I watched him play three games. He lost two games by himself.”

? @McclungMac caught up with @TheAndyKatz after his huge game today… and explains what was going on with his shoes ? pic.twitter.com/iSP3MKJLpp

Boeheim’s son Buddy, who scored 25 second half points for Syracuse, offered up a similar sentiment. “That’s a really good team,” he said. “They lost a couple guys but I think they’re better without them. Their chemistry is there. They really play together well. They have a really good big guy. That’s just a really skilled team. Georgetown played its main seven guys against Syracuse and even went deep into the bench to play George Muresan, who hadn’t played a game this season. And yes, that George Muresan. Well, his son, anyway. Ewing said he won’t be able to play as fast as he originally wanted to this season. With a shorthanded roster and a limited bench, he can’t press as much as he’d like either. Instead, Ewing will be forced to play his top four guys a plethora of minutes this season. “They played extended minutes,” Ewing said. “Mos’ (Jagan Mosley) had 36, Mac had 35, Terrell played 38. Those guys played a lot of minutes and they’re going to have to play a lot of minutes. It might be some load management.” Follow James on twitter @JamesSzuba Follow Adam Zagoria on Twitter And Like ZAGS on Facebook