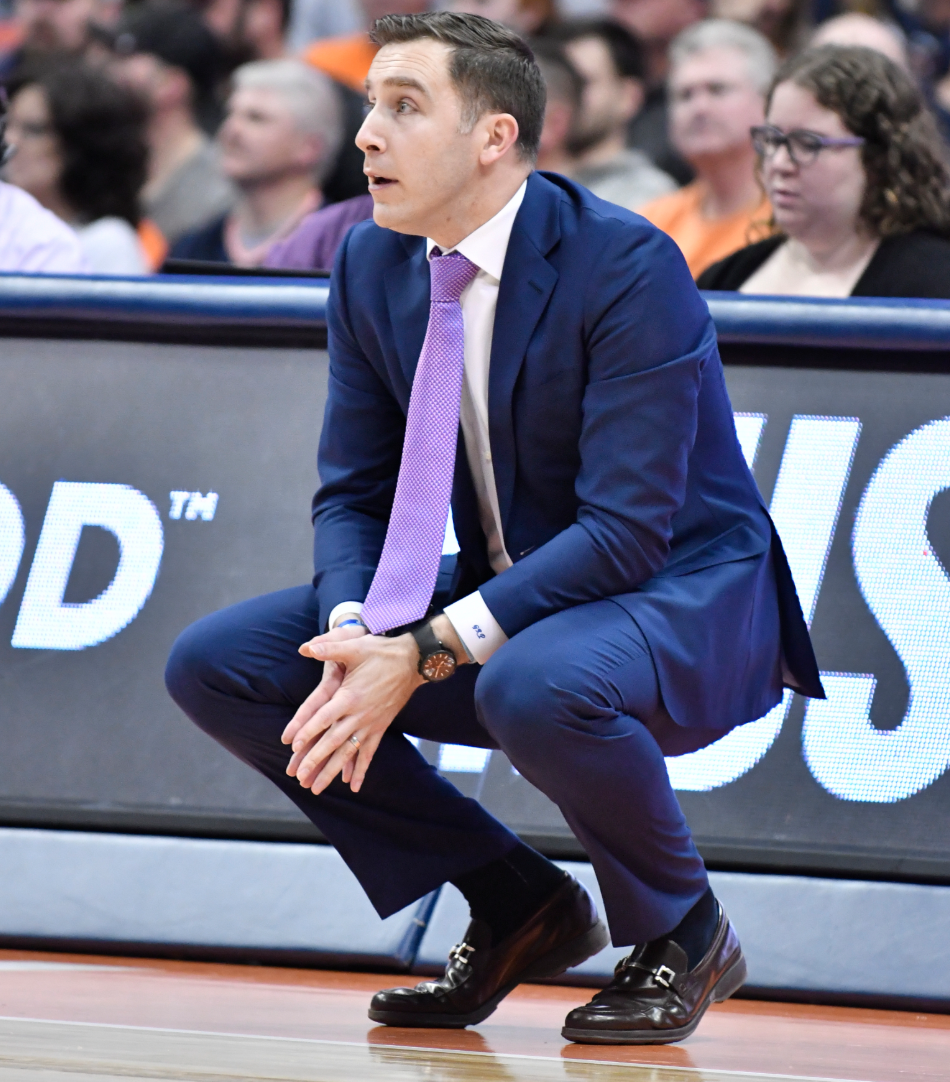 By: JAMES SZUBA Well before Niagara basketball head coach Greg Paulus took his Purple Eagles squad to Syracuse on Saturday night, the team had already given out its full allotment of tickets in the Carrier Dome. Locally, friends and family reached out to Paulus to offer support and to let him know they would be in attendance for his return to central New York. Paulus of course played basketball at Duke for Mike Krzyzewski, but before he did, he was a highly sought after football and basketball recruit locally at CBA in Syracuse. After his four-year Duke basketball career concluded, Paulus returned to Syracuse for a one-season stint. He played football at SU as the starting quarterback for Doug Marrone. Buddy Boeheim, who scored 15 points for Syracuse against Niagara, was too young to remember Paulus during his CBA days, but does remember going to Syracuse football games when Paulus was under center. “I was young. But I remember people telling me how great he was. I remember watching him play quarterback here so I went to a lot of games watching him play. I know how big he is around here. It’s just great having him here on the sidelines,” Buddy Boeheim said after the game. Paulus had not been back to Syracuse in some time prior to Saturday. He had a brief exchange with Jim Boeheim before the game and when he walked into the Carrier Dome and saw familiar faces, it brought back a lot of memories from both high school and his lone football season in Orange. “I think it was more when I walked into the arena because I saw so many family members and friends and people that I’ve known since I’ve been in middle schools and high school,” Paulus said. “I’ve come to the dome so many times in like elementary school and playing state championship games in football. Obviously the year me being the quarterback here was unbelievably special and I’ll never forget it. But I think all the memories just kind of came through as we saw more and more people.” Niagara ultimately came up short against Syracuse, losing 71-57. Paulus has taken over the Niagara program following an unusual set of circumstances. He was hired to the Niagara staff as an assistant coach shortly after Patrick Beilein took the head coaching job. Just two weeks before the season began, Beilein stepped down citing personal reasons. Paulus was then promoted to head coach. “He’s done a great job. He’s doing a great coaching job with that team,” Jim Boeheim said. “They play hard, they do a lot of good things. He’s short-handed. They’re small. But I think he’s done a really good job with that team.” Niagara has gotten off to anything but an auspicious start, going 2-9 through the first 11 games. Paulus insists that first this team needs to build a foundation and a culture. “What we’re trying to do is build a foundation for our culture and our program and building habits every single day. What we want to be is we want to be a basketball team that is connected, that plays together that works hard and I think we got better from this experience,” Paulus said. The game against Syracuse provided another opportunity for Niagara to build its basketball program and to compete against power five competition. But it also served as a homecoming for the once local star. “One thing,” Paulus began. “I love being from Syracuse. I’m so proud to be from this area and this community. They’ve embraced me from day one. They’ve helped raise me. This community has been so supportive and I’m so thankful to be a part of this community.” Follow James on twitter @JamesSzuba Follow Adam Zagoria on Twitter And Like ZAGS on Facebook