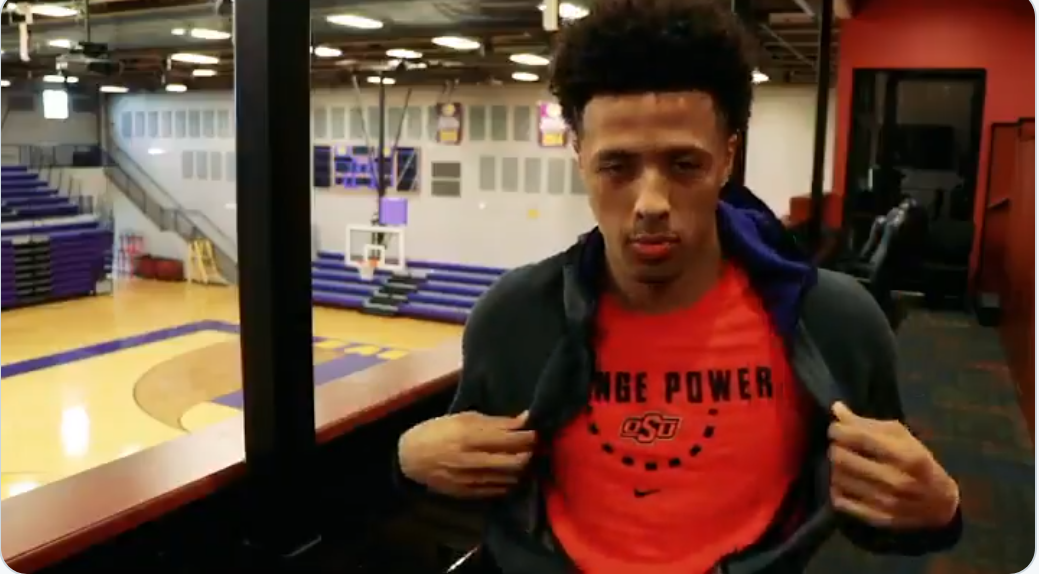 By ADAM ZAGORIA The Cade Cunningham Sweepstakes is finally over. The 6-foot-7 point guard from Montverde (FL) Academy committed to Oklahoma State via social media, choosing them over Kentucky, North Carolina, Florida and Washington. Cannen Cunningham, Cade’s older brother, is an assistant on coach Mike Boynton’s staff at OSU. “To be honest, I was this close to picking a different school, but blood is always thicker than water,” Cunningham said. “Go Pokes.” Some experts had predicted Cunningham would land at Kentucky, especially after John Calipari visited him several times. But in the end, he picked the school where his brother coaches. Per ESPN.com, Cunningham is ranked No. 2 in 2020. He is the projected No. 1 pick in the 2021 NBA Draft, per ESPN. “I’ve been so impressed with Cade’s development and maturity both on the court and watching him become a man,” Montverde coach Kevin Boyle said. “I’m sure his decision will attract more players to Oklahoma State. Now he can focus on his senior year enjoying his teammates and classmates and trying to copy Ben Simmons and R.J. Barrett has both a National Player of the year and National Champion.” “Cade has a high level skill set and knows how to play with and without the ball in his hands,” USA Basketball youth coach Don Showalter said. “Cade is tremendously versatile and can play four different positions plus even more importantly can guard four different positions.”

I am who I am, and who I’m not, I will never be. pic.twitter.com/FDDZBd7KRJ

“I think Cade has great admiration and love and respect for his brother, but I think he truly has expressed to me that he’s giving Oklahoma State a very, very strong look,” Boyle said previously. “But he’s also looking very hard at the other schools that are recruiting him. With Ben [Simmons], I always thought that Ben was going to LSU because his Godfather [David Patrick] was there. With Cade, I really believe that if there’s a school that’s a better fit for him, that he thinks has a better chance to get him where he wants to be as a player, and he enjoys the campus and the social life and all that, I think it’s possible” he could pick another school. Boyle said Cunningham “is arguably as good as any player in the country right now. He’s such a versatile player. He’s shooting the ball so much better. In my 30 years, he’s made as much progress in one year as any kid I’ve had. He’s gone from being a good player last year to arguably the best player in the country this year. He’s in that conversation for that No. 1 overall player. Not since Al Harrington have I had a player make such development from one year to the next. “He’s just come on. He’s big for today’s game, a big guard that’s versatile, that can score, that can facilitate. He’s a very versatile player. He can guard multiple positions. He’s going to fill up a stat sheet and I think he’s going to have the chance at a really good career in the NBA.” Since 2011, Boyle has coached six top-3 NBA Draft picks in No. 1s Simmons and Kyrie Irving, No. 2s D’Angelo Russell and Michael Kidd-Gilchrist and No. 3s Joel Embiid and R.J. Barrett. Follow Adam Zagoria on Twitter And Like ZAGS on Facebook