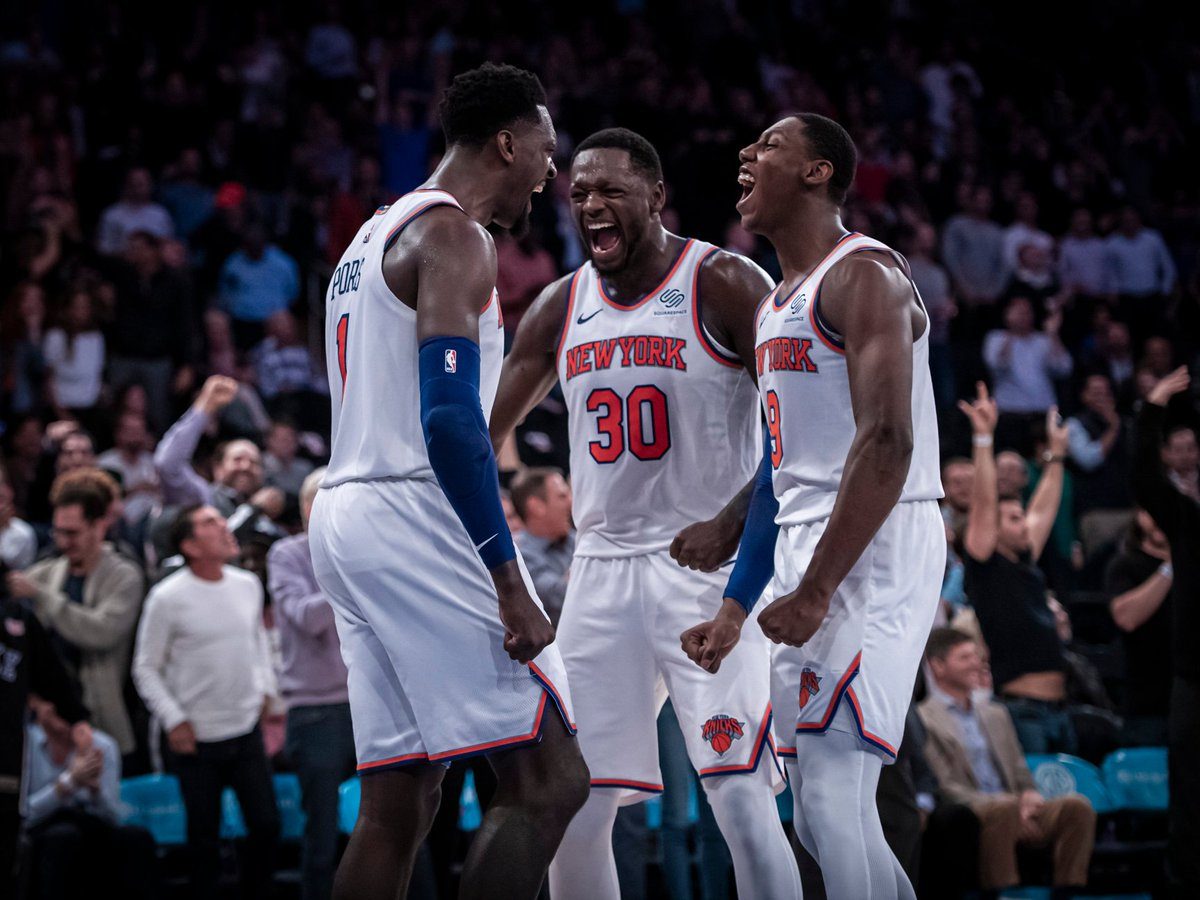 By ADAM ZAGORIA Knicks GM Scott Perry wants St. John’s coach Mike Anderson to come to every home game now. “I think Scott Perry told me that, but I got a day job. I hope y’all know that,” Anderson said Monday night on “MSG 150.” With his former coach at Arkansas in attendance, Bobby Portis went for 28 points and 11 rebounds, including two big clutch 3-pointers down the stretch, in the team’s 105-98 victory over the Chicago Bulls. It was fortuitous as Anderson sat courtside wearing his St. John’s gear. “Bobby, great job tonight, you looked like you did when you were at Arkansas,” Anderson told Portis on air. “What a performance and I couldn’t be more proud of you. “Everyone talked about the offense, but I thought defensively you were all over the place. Your versatility shows and I think it helped your team get the win.”

After the win helped the Knicks avoid an 0-4 start, Portis told MSG’s Rebecca Haarlow, “Today I’m just happy they fell and that our team got our first victory. I feel special to be here and I’m happy to be a Knick.” Anderson praised Portis as a hard-worker. “He’s the first one in the gym and the last one to leave,” he said. Anderson actually had two former players on the rosters as Daniel Gafford is on the Bulls roster. He could probably use both players on his current St. John’s team, which was picked 10th in the 10-team Big East and recently missed on NCAA waivers for guard Rasheem Dunn and forward Ian Steere. St. John’s has several potential future pros in guard Mustapha Heron and wing L.J. Figueroa, both of whom remained with the program after Chris Mullin left in April. “One of the things you can build on is they actually went to the [NCAA] Tournament last year and I think Chris did a good job of getting them to the tournament and obviously [that’s] the ultimate goal for any coach,” Anderson said. Anderson vowed to bring his “40 minutes of hell” style to St. John’s. “I told our guys we’re going to pick them up when they come off the bus so that means you’re going to play some defense,” he said. Anderson added that he needed to up the talent level on his team going forward. “Now we just got to get some talented guys like that but I’m excited,” he said. “I really am.” Follow Adam Zagoria on Twitter And like ZAGS on Facebook .