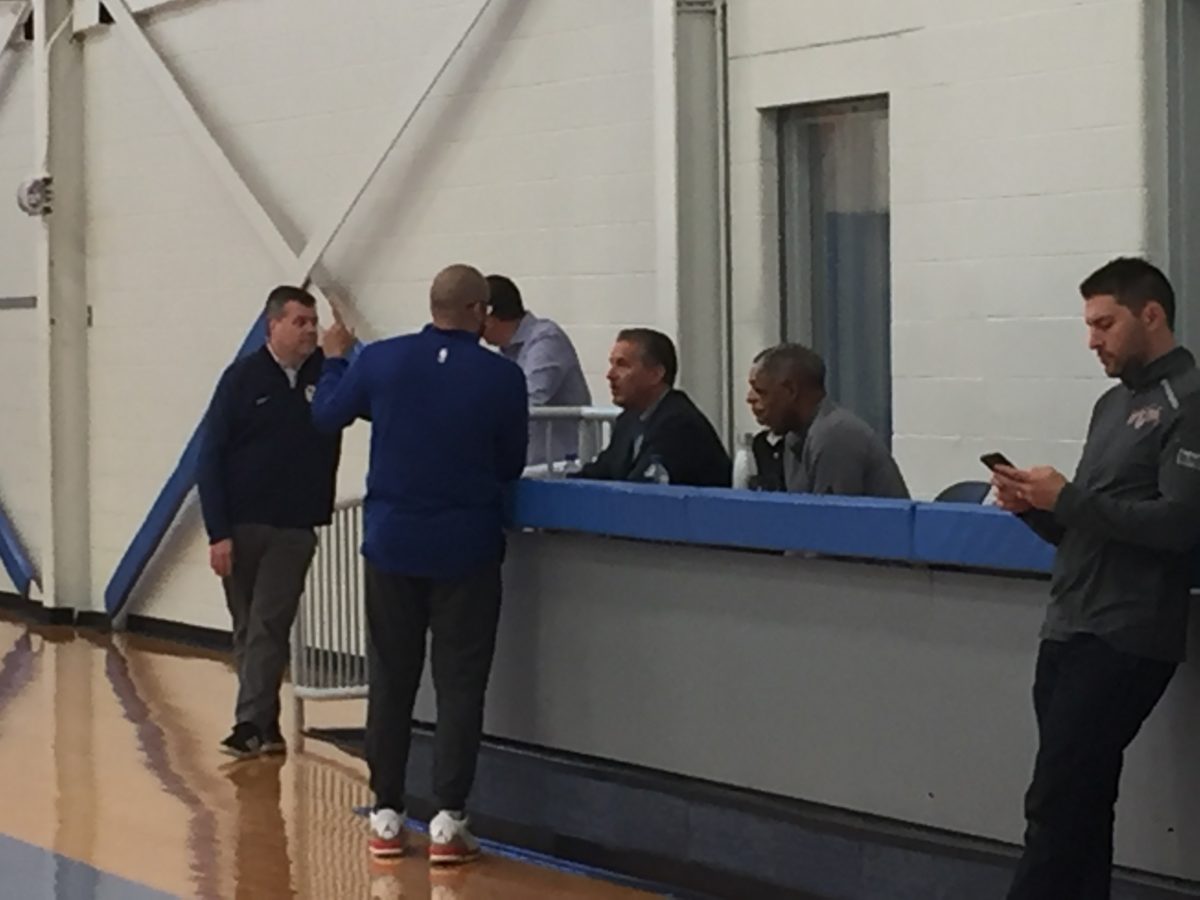 By ADAM ZAGORIA Kentucky coach John Calipari became the latest high-profile visitor to Knicks training camp on Thursday. The visit was part of a busy day for Calipari in the New York area. He tripped to Archbishop Stepinac in nearby White Plains on Thursday afternoon and offered a scholarship to Class of 2021 forward A.J. Griffin, the son of Toronto Raptors assistant Adrian Griffin. Calipari then spent the evening recruiting at Roselle (N.J.) Catholic, which features 6-foot-11 dunking machine Cliff Omoruyi. The Knicks feature two of Calipari’s former players in second-year forward Kevin Knox and freeagent addition Julius Randle. Calipari sat with Knicks President Steve Mills and GM Scott Perry and also chatted with coach David Fizdale. Fizdale has said the team purposely added players with winning DNA from programs like Kentucky, Duke, Kansas and Arizona. “I’m taking advantage of that,” Fizdale said of Calipari, according to Peter Botte of the New York Post. “We don’t have him here for long. But to have a guy like that with that kind of brain and understanding of the game, it’s good to talk ideas with. [Calipari has] very good knowledge of two of our players. We invited him to camp and he couldn’t make it to camp, but he said, don’t you worry, I’m going to visit you guys when I come to New York. Sure enough, he lived up to his word.” Randle said he got “a little juice” from seeing his former coach, and that Kentucky was “the start of it all for me.” Knox said last week he liked having a second Kentucky guy on the roster. “Kentucky’s always family,” he said. “That’s one thing when you go there. Everywhere you go you’ll always find some Kentucky family. It’s good to have him here. I’ve been getting some shots up with him, talking to him, learn some new things – offensively and defensively. It’s great another Kentucky player on the team.” Fizdale has made a habit of inviting college coaches and other basketball people to camp and . Manhattan coach Steve Masiello, a former Knicks ball boy, Columbia’s Jim Engles, and former Kentucky and St. John’s assistant Barry “Slice” Rohrssen were at camp last week.

‘No I’m not coming out of retirement. I’m 62. That’s not going to work’ -Bernard king pic.twitter.com/lGHJtcUfUq

Ben Wallace spoke to the team Thursday, and former Knicks legend Bernard King was at camp last week, mentoring rookie R.J. Barrett of Duke. Fizdale asked Duke coach Mike Krzyzewski to come to camp, as I first reported on Forbes.com, but Coach K so far has been unable to make it. Both Coach K and Calipari will be at Madison Square Garden for the Champions Classic on Nov. 5 when Kentucky faces Michigan State and Duke meets Kansas. Follow Adam Zagoria on Twitter And Like ZAGS on Facebook