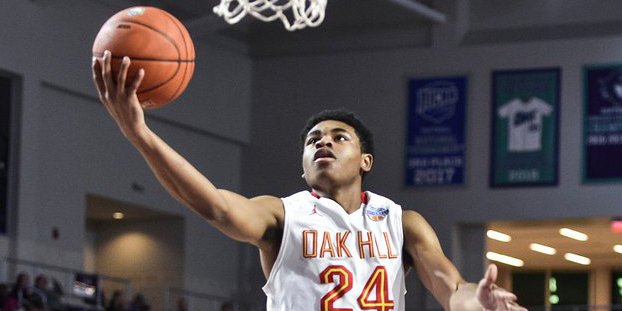 By ADAM ZAGORIA Cam Thomas, the 6-foot-5, 192-pound shooting from Oak Hill (VA) Academy, took his official visit to UCLA this past weekend and remains “open” in his recruitment. “The visit was great and their message is to get UCLA back to where it’s been,” Thomas said Monday by text. “And I would fit in as a scoring combo guard.” UCLA has one commit for 2020 in point guard Daishen Nix. The Bruins remain involved for several other Class of 2020 prospects, including wing Andre Jackson and big man Mark Williams.

Thomas previously took an official visit to LSU the previous weekend and said he plans to visit Auburn (TBD) and UConn (Oct. 11). He will no longer visit N.C. State, he said. “I really enjoyed the LSU visit,” he said. “I like coach [Will] Wade and the staff a bunch and I enjoyed being around the practices and players that weekend so all-around [it was a] great visit.” As for future plans, he said, “I don’t know when I’m taking one to Auburn and I have a visit scheduled to UConn in October. My recruitment is still open.” According to 247Sports, Thomas is ranked as the No. 24 overall player in the Class of 2020 and the No. 6 shooting guard. “I’m a combo guard who can score on all three levels and make plays for others who will help whatever team I go to win games,” he said. Follow Adam Zagoria on Twitter And Like ZAGS on Facebook