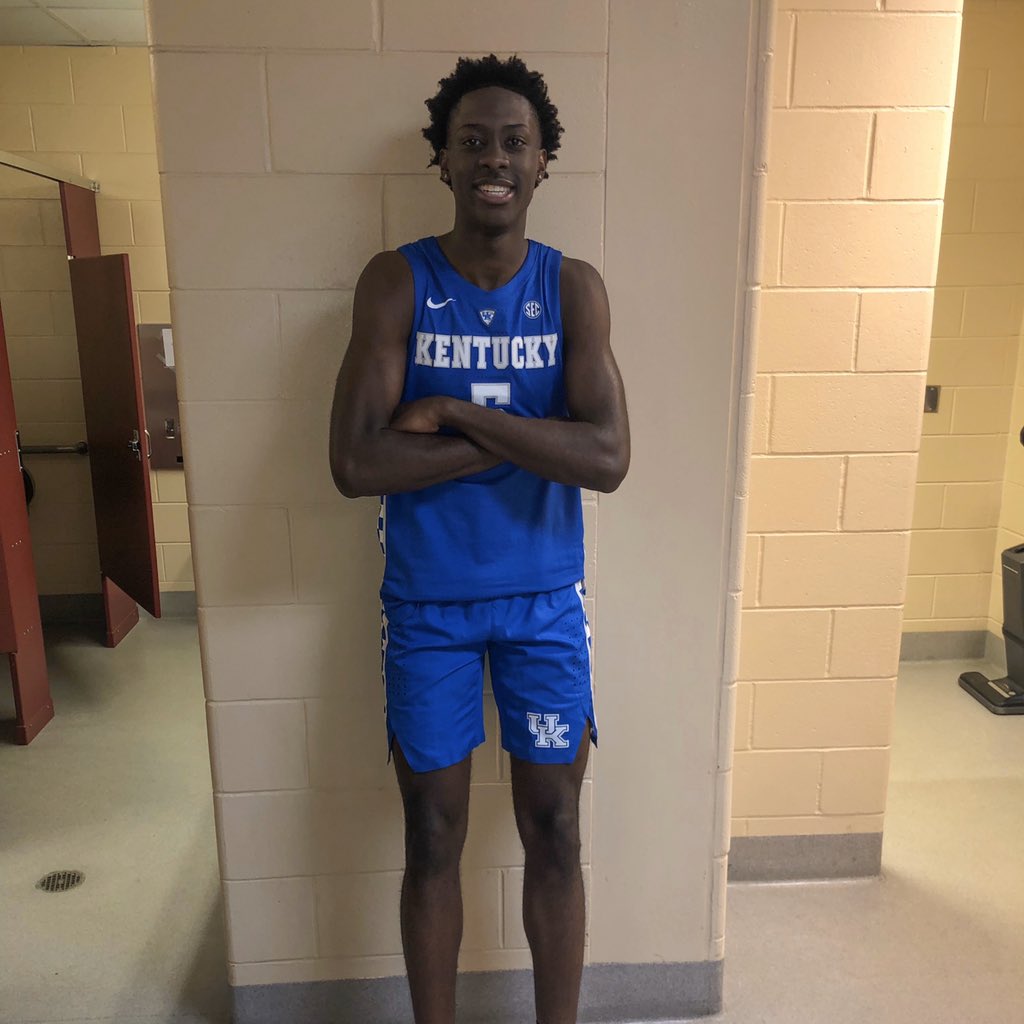 By ETHAN FULLER & ADAM ZAGORIA ROXBURY, Mass. –– Kentucky completed a monster 1-2 punch on the recruiting front on Saturday when Terrence Clarke committed to the Wildcats. The 6-foot-7 wing from Brewster (N.H.) Academy is a prototypical future NBA wing ranked No. 4 in the Class of 2021 by ESPN.com. He announced Saturday he plans to reclass to 2020 and head to Kentucky next fall. One mock NBA Draft has Clark going No. 5 in 2021. “I will be reclassifying to the Class of 2020 and attending the University of Kentucky,” he announced in deo played at the Vine Street Community Center. Clarke chose Kentucky over Boston College, Duke, Memphis, Texas Tech and UCLA. “Terrence is arguably the most talented prospect we’ve had in our program at Brewster in the last 20 years,” Brewster coach Jason Smith told ZAGSBLOG. “His understanding of the game and basketball IQ is tremendous. Terrence’s ability to create space and separation is at an elite level.”

“ and I know they don’t wanna see the young boy win “ @Ballislife pic.twitter.com/CUI1eTgHBX

Clark is Kentucky’s second major commit since Thursday, when Lance Ware, the 6-foot-9, 220-pound Class of 2020 forward from Camden (N.J.) High School and the NY Rens AAU Program, picked the Wildcats. Kentucky coach John Calipari and Boston College coach Jim Christian both visited Clark this week at Brewster (N.H.) Academy. Memphis coach Penny Hardaway a visit there set for Wednesday. While Calipari has routinely plucked top players from New Jersey in recent years, Clarke marks the highest-profile player to come out of the Boston area in years. “Boston is a great basketball city,” Clarke told the Boston Globe. “I really want to do this for myself, but I also want to do this for my community because [Boston] has never been on the map. Nobody would say: ‘Oh, [top] basketball players come from Boston.’ I want to be the person to make that happen.” Rivals.com national analyst Eric Bossi told the paper: “He’s on the track of someone who projects as an NBA player. Off the top of my head, certainly in the last 5-10 years, I don’t think there’s any question that he’s the best prospect from Boston.” Boston College had hoped Clarke might stay home and a team source said the knew it was a “long shot” heading into Saturday’s announcement. Clarke recently took an unofficial to BC. He also visited Kentucky last year for “Big Blue Madness.” He previously said Calipari “thinks I can be a very and facilitator as a 6-foot-6 guard, but I score . He thinks the main thing for me is what everybody else says, my body language and just playing hard every game.” Kentucky now has the No. 1-ranked recruiting class in 2020 consisting of Clarke, Ware, shooting guard B.J. Boston and small forward Cam’Ron Fletcher. They remain in the mix for several elite 2020 prospects, including Cade Cunningham, Scottie Barnes, Jalen Green, Josh Christopher, Greg Brown Cliff Omoruyi. Follow Ethan on Twitter Follow Adam Zagoria on Twitter And like ZAGS on Facebook