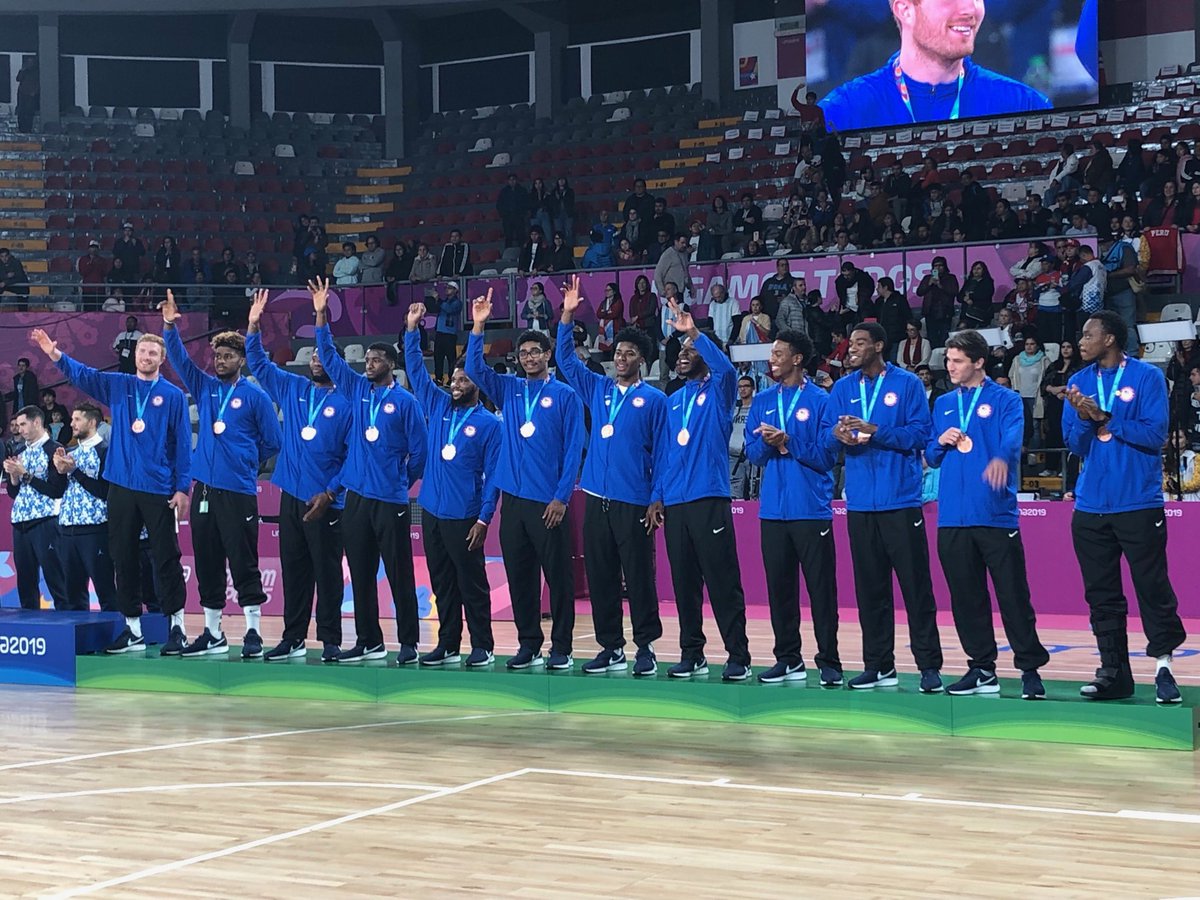 Team USA saved its best for last at the Pan American Games, rallying from a 5-point deficit going into the fourth quarter and defeating Dominican Republic 92-83 in the bronze-medal game at Dibos Colisuem.  The squad of BIG EAST standouts outscored its opponent 32-18 in the final frame.  Team USA, by far the youngest team in the field, finished Pan American Games play with a 3-2 record while playing five games in five days. “We faced some adversity along the way,” coach Ed Cooley, “and we bounced back every time.  I am so proud mental toughness of this group.  They were a pleasure to coach.  We’re so proud to represent our country and the BIG EAST.”

What winning sounds like from the great Ed Cooley ⁦@PCFriarsmbb⁩ Thank you Coach #bigeast ?? ?? ? pic.twitter.com/s9FgEcH4je

Guard Collin Gillespie (Villanova) scored 19 of his game-high 25 points in the second half, including 11 straight in the third quarter.  “Collin’s championship pedigree showed tonight,” complimented Cooley. “It wasn’t just me,” Gillespie said of his strong second half.  “I have great teammates and we had a great team effort.  We were going against some pros and we are just a bunch of college dudes, but our goal was to bring something home with us.” Alpha Diallo (Providence), who enjoyed a strong all-around tournament, finished with 23 points, five rebounds and three assists.  It was a Diallo basket with 7:25 remaining in the game that gave Team USA the lead for good 69-67.  Geoff Groselle (Creighton) used his experience as a pro to be productive in every round.  He had 18 points and 10 boards in the bronze-medal game.  The Creighton graduate talked to the team on the floor before it went into the locker room after Saturday’s 114-75 loss to Argentina in the semifinals.  “I just them know that they are here for a reason,” said Groselle.  “They are a great group of players from a great basketball conference.  And it showed tonight.  We were confident going into the fourth quarter and we weren’t going to be denied.” After the big loss to Argentina, Team USA wanted to start well against Dominican Republic to get back some confidence.  They did just that with a 9-1 run to open the game which prompted a quick timeout from the opposing bench.  Gillespie and Myles Powell (Seton Hall) hit their first 3-point attempts during the spurt.     L.J. Figueroa (St. John’s), who plays for Dominican Republic, tied the game with a short bank shot with 2:06 remaining in the quarter.  Ty-Shon Alexander (Creighton) hit a pair of free throws to take back the lead 17-15 and a free throw by Gillespie with 1.1 seconds left tied the game 20-20 at the end of the period.  Team USA made 6-of-9 shots from the floor, but committed seven turnovers, mostly on sloppy passes. In the second quarter, Team USA found success going inside to Groselle while Dominican Republic made a few shots inside and mixed in a couple of 3-pointers.  Team USA cut down on its turnover rate (only two), but did not shoot as well and trailed 38-36 at halftime.  Groselle finished the half with 13 points, making all five of his shots from the field, and pulling down four rebounds.     After trailing 43-38 early in the third quarter, Team USA scored six straight points with Gillespie’s driving layup that produced a 44-43 lead.  That was the first of 11 straight points by Gillespie.  His last two points, a pair of free throws, gave Team USA a 54-53 edge.  After an Alpha Diallo hoop put Team USA up 57-56,  Dominican Republic closed the quarter with a 9-3 run and took a 65-60 lead into the fourth quarter when the Team USA heroics would begin. Figueroa finished with 11 points for Republic.  Mustafa Heron (St. John’s), who did not play because an ankle in the Argentina game, is Figueroa’s roommate at St. John’s.  Heron was disappointed he could not play knew what he was going to do with his medal.  He quipped, “I’m going to hang it on my door so he can see it every day.” Release: Via Big East Follow Adam Zagoria on Twitter And like ZAGS on Facebook