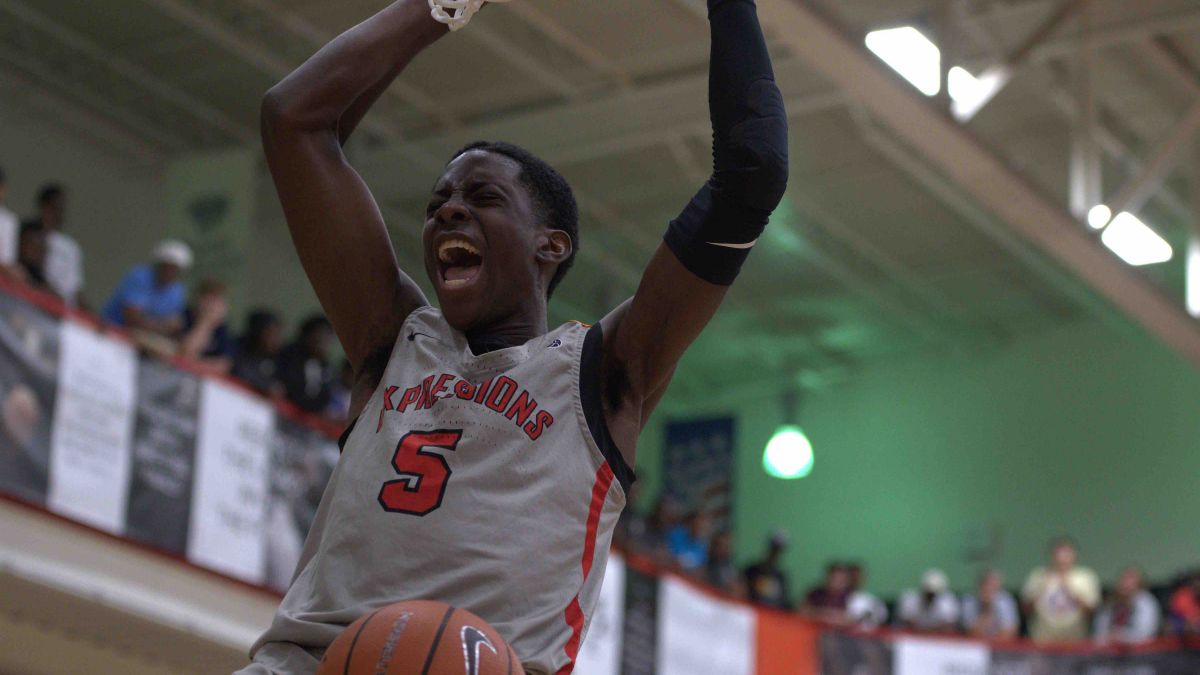 By ADAM ZAGORIA NORTH AUGUSTA, S.C. — Terrence Clarke is currently ranked the No. 3 prosect in the Class of 2021 by 247Sports.com, but he may not stay in that class for long. The 6-foot-6 wing from Brewster (N.H.) Academy and the Expressions Elite AAU program said it’s “possible” he could reclass to 2020 and head to college next season. “I’ve definitely been considering it,” he said Thursday at Peach Jam. “It’s been talked about with my family, we’ve definitely been over it. I’ll say that right now, it is a possibility that I could reclass. “Some of the coaches that I’m talking to now think that I can come in in 2020. I won’t say who yet, but a of schools say that I can come in for the 2020 class. They’ve definitely been talking about it. All schools are just trying to build a better relationship with me.”

2021 wing ⁦@terrenceclarke_⁩ says it’s ‘possible’ he could reclass to 2020. Said he is open but likes Memphis b/c Penny is recruiting him as a guard instead of a wing. pic.twitter.com/oTOLhdYCUe

Clarke says he’s discussed the option with his family. “Going to 2020 there are a lot of pros like working out at college and advanced training and stuff like that,” he said. “Staying in high school, I’d do a lot of high school things. So there’s definitely pros and cons to it. We went over everything.” Clarke, who is ranked the No. 1 shooting guard by 247 in 2021, remains fairly open in his recruitment, with Kentucky, Duke, Memphis, UConn, Indiana and Louisville among the schools watching him. He spoke very highly of Memphis because they see him as a wing and not a guard. He broke down several schools: Duke: “Oh yeah, we talk a lot. Mainly with [assistant coach Jon] Scheyer. I talk to him about all types of things. A lot of the coaches talk to me about off-the-court stuff, trying to build my mindset. “One of the main things for me, [with] all schools is just how I’m going to fit into their system. He’s been talking to me about that.” He added: “The main thing that they say is that I can fit into the R.J. Barrett role and just be a ball-dominant play-maker. For me, that’s one of the main things I want to be. I want to have the ball in my hands here and there and make plays for other people and also for myself.” He spoke to Coach K on June 15 and hoped an offer might come after Peach Jam. “Coach K has made it known that he wants to see my game and break down the decision then and then we’ll go from there,” he said. Indiana: “Every single time I talk about Indiana I talk about their strength and conditioning. One of their main things is they can get me stronger and that’s one of the things I think will benefit my game a lot.” Louisville: “Louisville, they always talking to me about stuff off the court more than on the court. I really haven’t heard from them a lot.”

Memphis: “Me and [assistant coach] Mike [Miller] talk almost every day. Me and Penny, we talk a lot. He kind of helps me [with] mindset. He was a 6-7 point guard like I’m trying to be, trying to give me tips on that type of stuff.” He added: “They want to see me as a guard. Penny wants to see me in the NBA and I think he wants to give me a lot of teaching moments on the court and off the court, too. So I think with Memphis, the main thing is how I fit into the system as a guard and that’s really what I want to be. I think that’s one of the main things. “I think they think I can 1, 2 or 3 and Penny thinks I can be a guard as much as I do. Everybody kind of labels me as a wing, he thinks that I can be a guard. After the first session, he just told me to work on my handles and everything like that. I just want to work on my game plan and step up and make plays. “Every school has strengths but Memphis really focuses on the guard piece. Every other school kind of just wants me to fit into their system. I think Memphis is one of the main schools that tells me a guard is who I really want to be.” He added that he’s building a relationship with Hardaway and is impressed with their No. 1- ranked class led by James Wiseman, the projected No. 1 pick in 2020. “I know Penny as a person and he’s a great guy. The relationship that we’re building is a good thing. With him getting those guys, it’s a good thing because there’s probably going to be guys that stay. I’m really big on player development, I really want to develop so that’s something I’m definitely going to pay attention to.” UConn: “I talk to [head coach Dan] Hurley a lot. He talks to me a lot before games, trying to pump me up before games and stuff like that. I talk to UConn a lot. “I probably will visit there soon.” Clarke did not address Kentucky on Thursday, but he visited Kentucky in October for Big Blue Madness. “It was pretty good, I was definitely stunned by everything,” Clarke said in January. He said Kentucky coach John Calipari “thinks I can be a very good play-maker and facilitator as a 6-foot-6 guard, but I can also score the basketball. He thinks the main thing for me is what everybody else says, my body language and just playing hard every game.” Clarke said he plans to narrow his list “probably soon just because I’m going into my junior year. I don’t really have a set date. Right now I’m just kind of focused on trying to win at Peach Jam.” He added: “I will probably try to take as many visits as I can, but right now I have no clue.” Follow Adam Zagoria on Twitter And Like ZAGS on Facebook