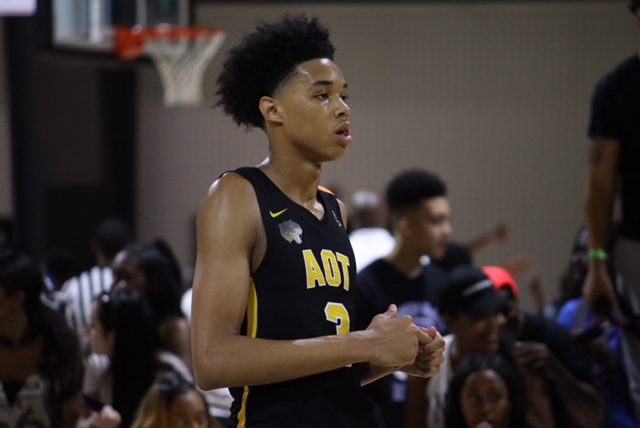 By ADAM ZAGORIA & ARI ROSENFELD Brandon Boston Jr., the Class of 2020 guard/forward from Norcross (GA) and AOT Running Rebels, will take an official visit to Kentucky on July 25 and has also added Oregon to his list, according to Rivals.com. Boston Jr. is now considering Kentucky, Duke, Auburn, Florida and Oregon.

Five-star BJ Boston will take an official visit to Kentucky on July 25, he tells @Rivals. Has also expanded his list from four to five. Oregon now is in contention along with the Wildcats, Auburn, Duke and Florida @RowlandRIVALS @DuckSports https://t.co/KnZ8ozNti4

Prior to adding Oregon, Boston ecently said that at this point, the schools’ respective pitches are all essentially the same. “Just go at it every game and play hard,” he said last month at the NBA Top 100 Camp in Virginia. “Just keep playing hard, and that they’re watching and they want me.” recapped his unofficial visit to Kentucky, which took place in February when the Wildcats routed Auburn at Rupp Arena. “It was a good atmosphere,” he said. “It was like an NBA arena in there when they played Auburn. It was good, real high-intensity.” So how will he begin to differentiate the schools when it ultimately comes time to make a final decision? According to Boston, it will come down to who really needs him the most, as well as a gut feeling of comfort.\ “They’ve got to want me really,” he said. “They’ve got to need me the most, I’ve got to be comfortable with the coach and how they and just be all the way there with it.” Follow Ari on Twitter Follow Adam Zagoria on Twitter And like ZAGS on Facebook