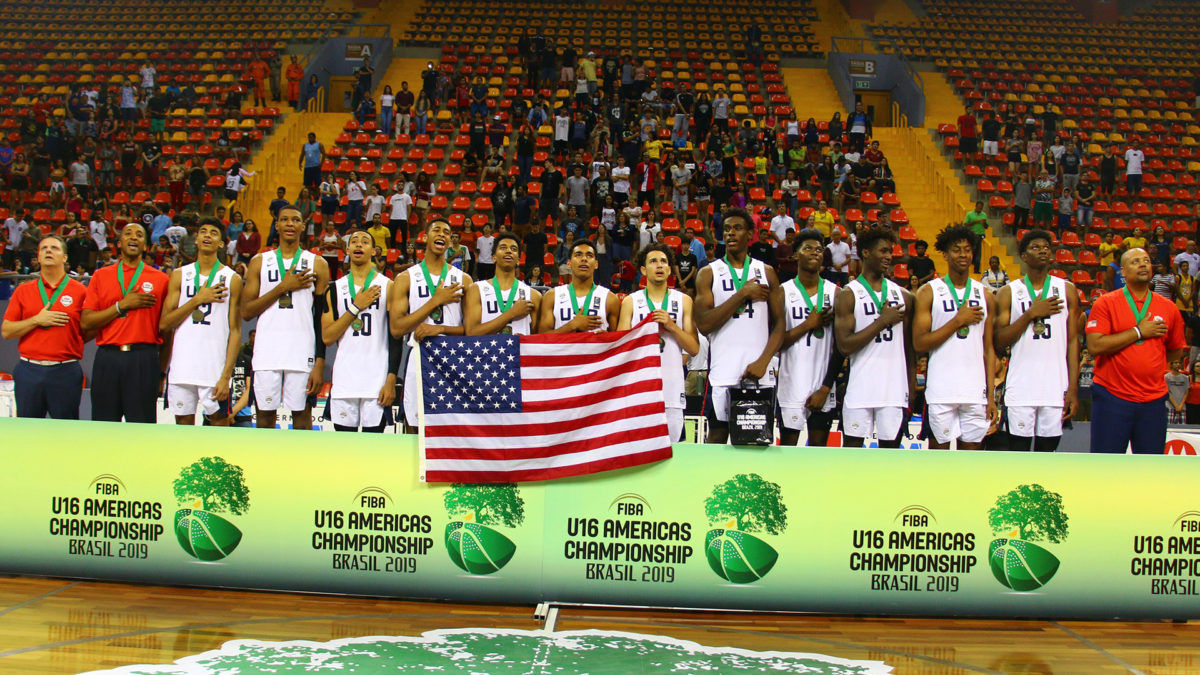 Behind a balanced scoring effort that saw six USA players reach double digits, the USA upped its record to 6-0 and earned a sixth-straight FIBA Americas Men’s U16 Championship gold medal after topping Canada (5-1) 94-71 in the gold medal game on June 9 at the Guilherme Paraense Arena in Belém, Brazil. Dominican Republic (4-2) earned the bronze medal, its first medal of any color at this tournament, with a 80-77 win over Argentina (2-4). “It’s an incredible feeling to have watched a group of young men grow and to just be a part of the process with them,” said said USA U16 head coach Mike Jones  (DeMatha Catholic H.S., Md.), who is now 31-2 overall and 8-1 as a head coach with USA Basketball against international teams. “I could not be more proud of them. They performed, they defended, they scored, they shared, that was a very selfless game by all of our guys and that’s the reason why we won.” Chris Livingston  (Buchtel H.S./Akron, Ohio), who led the USA with 23 points on 10-of-15 shooting from the floor was named MVP of the tournament and was joined on the All-Star Five (all-tournament team) by teammate Jalen Duren (Roman Catholic H.S., Pa.)/New Castle, Del.), who scored 10 points and grabbed eight rebounds. Also named to the All-Star Five were Caleb Houston and Ryan Nembhard from Canada and Jean Montero from Dominican Republic. “Chris’ motor and his energy and effort were contagious, and we saw that when we got to the tournament,” said Jones. “I don’t know who else you could have given that to just because of the way he played and how he affected everyone else’s energy. And then Jalen, obviously people can look at Jalen and say ‘hey, this kid is only 15 years old’ but for him, he’s grown a lot. His effort, his focus, his passion that he played with today, if he does that, he’s going to play this game for a long time. Those two guys definitely deserved to be on the all-tournament team.” “It feels great,” said Livingston on his MVP award. “It’s really a tribute to the team because I couldn’t do it without the team. They were getting me open shots and things like that.” “Chris came up big tonight,” said Duren. “Chris has played very well throughout the whole tournament and he deserved it.” Also scoring in double digits for the USA were AJ Griffin  (Archbishop Stepinac H.S./Ossining, N.Y.), who accounted for 18 points, Jabari Smith Jr. (Sandy Creek H.S./Tyrone, Ga.) tossed in 14 points and grabbed a game-high nine rebounds, Amari Bailey (Sierra Canyon H.S./Chatsworth, Calif.) scored 12 points and Richard Isaacs Jr. (Coronado H.S./Las Vegas, Nev.) added 11 points.   ” I could not be more proud of this team,” added Jones. “When we got together back on May 22, we all knew this was the purpose and this was the goal. Ugly, beautiful, whatever you want to call it, we got it done and again I could not be prouder of them.” Leading by one, 18-17, after the game’s opening 10 minutes, the USA created some breathing room after outscoring Canada 27-15 in the second quarter to grab a 45-32 lead at halftime. The lead was extended to 15, 72-57, after three quarters, and the USA sealed the game by outscoring Canada 22-20 in the fourth.  “They matched up pretty well with us in size, so you know we weren’t just going to get it done because of how big we were,” said Livingston. “We had to play great, we had to play hard, rebound and do it with each other. “They pushed the ball in transition a lot,” he added. “They got a lot of their buckets that way and they were on the offensive boards really hard. But, we outlasted them during the course of the game.” Tonight’s golden win marked the third-straight gold medal victory over Canada in FIBA Americas U16 play. The USA earned its first three gold medals with a trio of victories over Argentina. USA Basketball has claimed the gold medal in all six editions of the biennial event, which was first held in 2009, and has compiled a 31-0 slate during that time. Brazil (3-3) finished in fifth place after downing Puerto Rico (2-4) 78-61 and Mexico (1-5) earned its first win of the tournament to place seventh with a 74-68 win over Uruguay (1-5). Livingston joins a string of five previous MVP selections for USA U16 players. Bradley Beal  was tournament MVP in 2009, Jabari Parker earned the honor in 2011, Malik Newman took home the MVP trophy in 2013, Gary Trent Jr. was 2015 MVP and in 2017 Vernon Carey Jr. was named MVP.  “It was a fun process from training camp in Florida,” said Isaacs. “It’s been a long process. But everybody wanted to get the gold and that’s what we did. We all came together for one last game and did what we needed to do. It’s a crazy feeling. It’s something I’ve dreamed about. I couldn’t ever have imagined having a gold medal around my neck, but now that it’s here, it’s crazy. I’ll remember this forever.” Brazil (3-3) finished in fifth place after downing Puerto Rico (2-4) 78-61 and Mexico (1-5) earned its first win of the tournament to place seventh with a 74-68 win over Uruguay (1-5). High school head coaches Eric Flannery (St. Edward H.S., Ohio) and  Sharman White (Pace Academy, Ga.) served as assistant coaches for Jones and the U16 team.