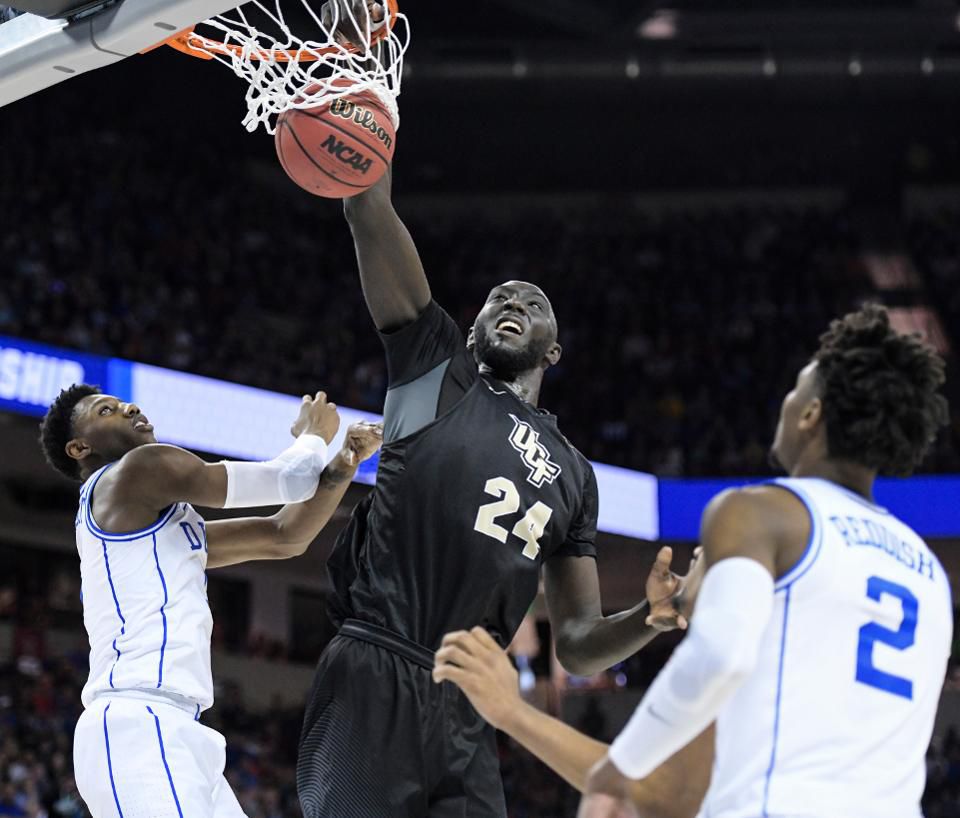 By ADAM ZAGORIA Tacko Fall, the 7-foot-6, 310-pound giant from Senegal who vowed to block Zion Williamson’s shot in the NCAA Tournament, headlined a Knicks group workout on Friday at their Tarrytown facility. Duke’s Marques Bolden, Wofford’s Fletcher Magee Florida State’s Terance Mann also participated. “It went pretty well, it was great,” Fall said Friday by phone. “I had a lot of fun. We had a great group of guys. Everybody came in and competed, so it was great.” Fall hopes to follow Minnesota’s Gorgui Dieng to become just the second player from Senegal in the NBA. He averaged 11.1 points, 7.6 rebounds 2.6 blocks last season for UCF, which lost a heartbreaker to Williamson and Duke in the NCAAs. The Knicks pick at No. 3 and No. 55 in the June 20 NBA Draft. Fall figures to be gone by No. 55, but he wants to show NBA teams that his game fits into the modern NBA where big men are supposed to help facilitate pace-and-space offenses. “I can help them right away, especially the things I can do defensively,” he said. “I feel like I can help any team with that right away. I can change the game like nobody else on that side. I’m really long, I move pretty good for my size. I can run up and down the floor. I’m a good shot-blocker. Most importantly, I probably alter more shots than I block with just my presence out there can have a huge impact. “And then offensively, I’m getting a lot better. I’ve spent a lot of time working on my game working with Drew out in L.A. and I’ve made a lot of improvement. I’m an easy target for lobs and things like that. I’m pretty long and I got touch around the rim.” Fall isn’t sure where he’ll be drafted and is just anxious to help an NBA team that believes in him. “Whatever happens, happens,” he said. “Right now all I’ve got to do is take care of every day and take advantage of every opportunity that happens. The main goal is to get drafted.” He said he’d love to play for the Knicks and plans to be somewhere around New York for the draft. “It would be awesome,” he said. “Great city, great fanbase, a lot of history. They have a lot of history in that building. They’re building their team and they have young guys. Adding me to it I feel like it would be a great opportunity.” Fall heads to Houston on Monday and then has more workouts coming up. The Knicks, meantime, will host Duke star R.J. Barrett Monday-Tuesday as they hone in on the No. 3 pick. Follow Adam Zagoria on Twitter And Like ZAGS on Facebook