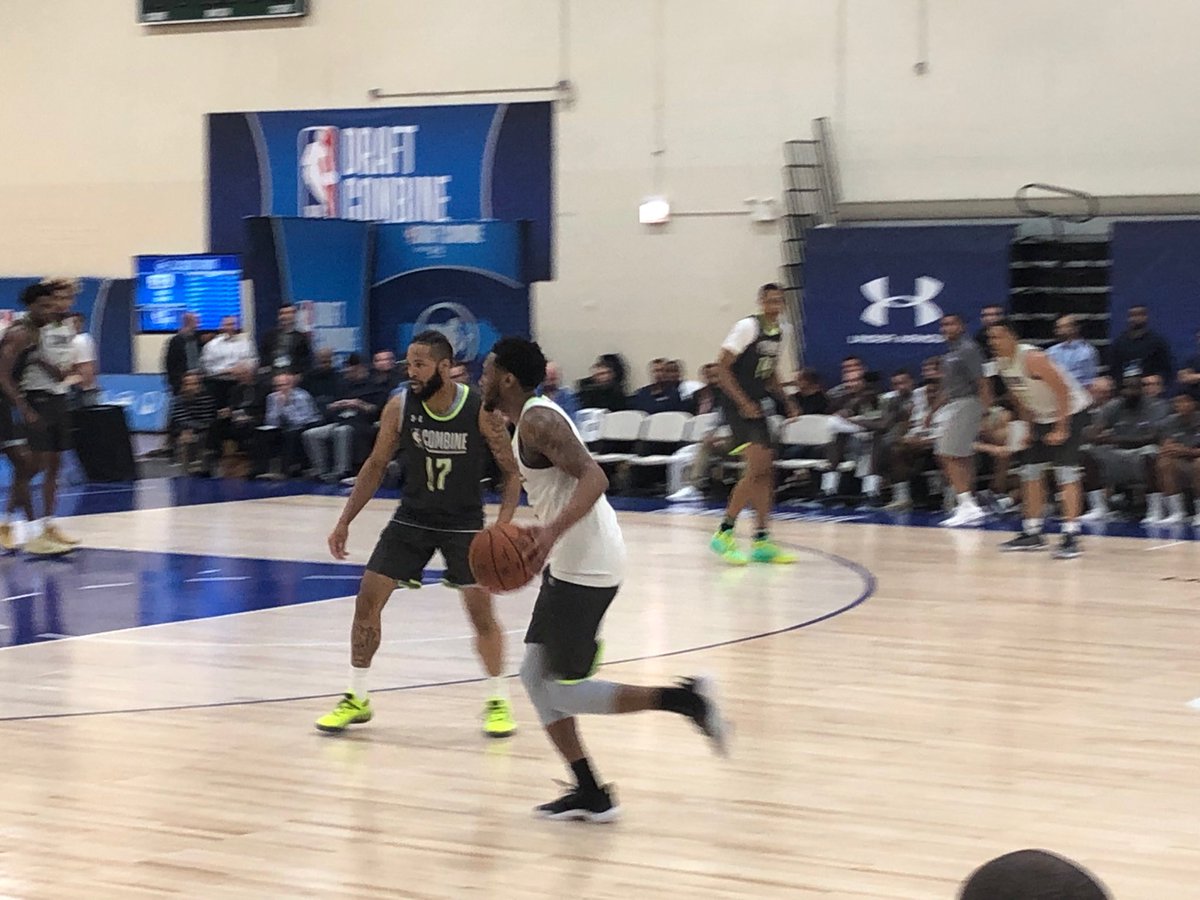 By ADAM ZAGORIA CHICAGO — St. John’s guard Shamorie Ponds impressed during his first game at the NBA Combine on Thursday. Ponds controlled the tempo, saw the floor well, dished and hit a few jumpers en route to putting up 8 points and 3 assists in his team’s 72-65 loss in front of a Who’s Who of NBA executives and scouts, including Larry Bird and Pat Riley. native is currently projected as the No. 50 pick in the June 20 NBA Draft per ESPN.com, but he thinks he can — and should — go higher. “I think I’m late-first round,” Ponds, who measured at 5-feet-11 1/2 inches, said when asked where he thinks he should be drafted. “And that’s my goal, what I’m aiming for. If I go higher, then definitely.” Ponds tested the NBA Draft waters after his sophomore season, but opted to return to campus after failing to land a first-round guarantee. “The feedback that [my coaches] got, I didn’t like it, so I pretty much didn’t want to keep my name in,” he said. “I definitely felt I could increase my draft stock and the team was going to be better and we had more team success.” Ponds came back and averaged 19.7 points, 5.1 assists and 4.1 rebounds for a St. John’s team that got off to a red-hot 12-0 start. They struggled later in the season and lost in the first round of the NCAA Tournament to Arizona State in what turned out to be Chris Mullin’s last game as coach. “I think It helped my draft stock and it helped the team,” he said of coming back. “I’m a big team guy so it pretty much helped us all.” In Chicago, Ponds has met with Golden State, Toronto, Portland Memphis. He said meeting with the Warriors was especially cool. “It’s a dope experience with all those teams,” he said. “A team like that, they’re always winning. I’m blessed to get an interview.” Knicks President Steve Mills and GM Scott Perry and Nets coach Kenny Atkinson were courtside, but Ponds hasn’t heard from either New York City team. The Knicks have a late second-round pick in addition to No. 3, but could always trade for an additional pick. “Neither of the New York teams reached but yet, Brooklyn or the Knicks,” he said. “I just gotta wait and see what happens.” Ponds worked this year on being more a facilitator and he’s trying to show that to NBA teams. “Definitely, my scoring ability and being able to make my teammates better,” he said. “I’ve always strived to make my teammates better and that’s always been underrated.” Ponds has been training in Irvine, Calif. with Washington forward Jaylen Nowell. Both players are repped by Ryan Davis, who has helped them improve their diets by eating specially made meals. His breakfast is cooked for him each morning featuring omelets and nuts. He had to give up fried foods, desserts sugars. Shawn Ponds, Shamorie’s brother, is also eating the same meals to show solidarity. “When Shamorie first got to Irvine, we got his blood drawn and analyzed and then built a diet that was specific to his nutritional needs,” Davis said. “He’s seeing great results on it. It’s for all of his meals for the day.” As for his old program, Ponds said he was “shocked” when Mullin left the program the night of the NCAA championship game. “I was in shock,” he said. “We made strides over the years and we got to the NCAA Tournament. I feel like t was a great thing on his resume.” Ponds hasn’t met with new coach Mike Anderson but thinks he’ll be good for the program. “I [didn’t] have a conversation with him,” he said. “I don’t know what he’s like but he’s all for the program.” Follow Adam Zagoria on Twitter And like ZAGS on Facebook