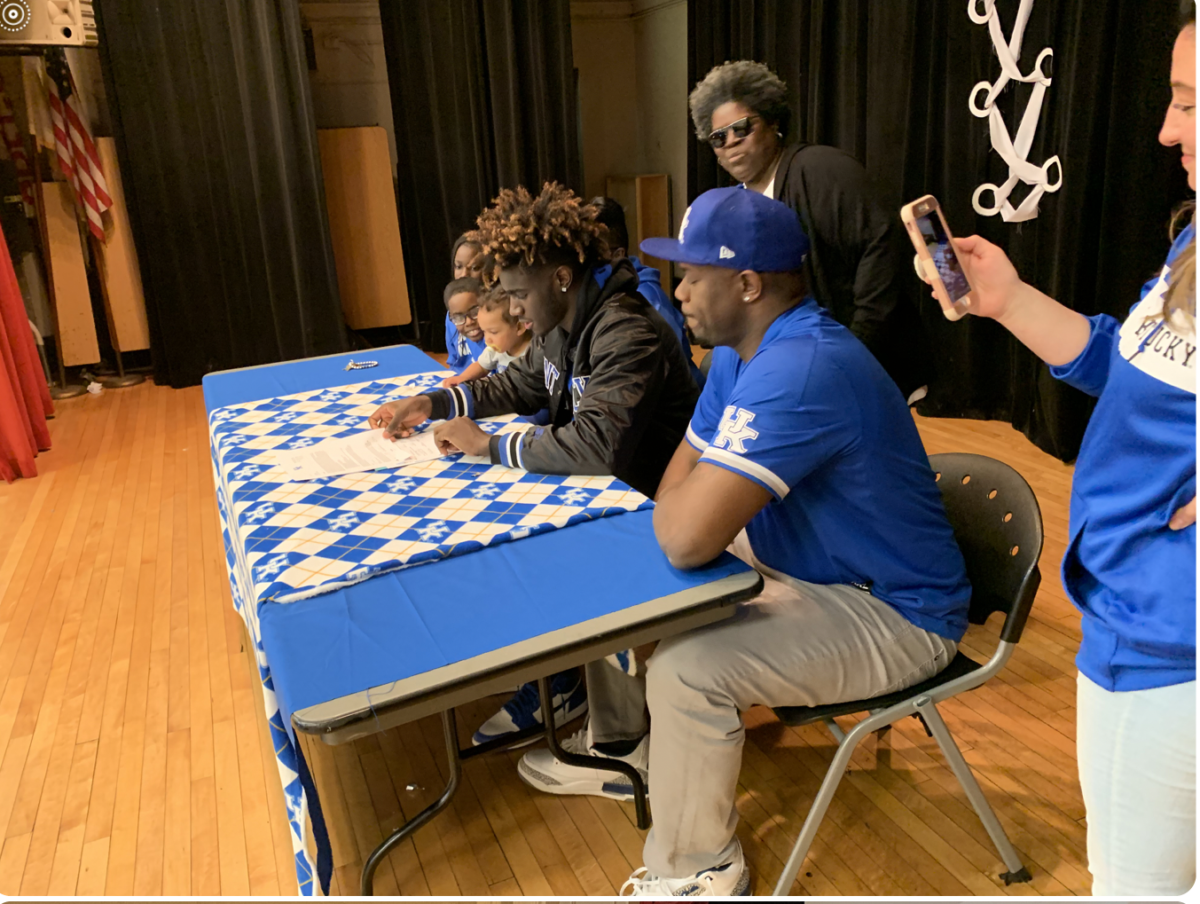 **Watch the documentary “Year of the Dragon” on Kahlil Whitney’s senior season here.   By ADAM ZAGORIA

The 6-foot-7 forward from Roselle (N.J.) Catholic nicknamed “The Dragon” flew in to Chicago and signed his National Letter of Intent at his grammar school, John Milton Gregory Academy. As first reported last fall by ZAGSBLOG, Whitney opted not to sign in the fall because he wanted to sign in his hometown and couldn’t make the travel logistics work in November. He flew into Chicago for the signing and then turned right around to come back to New Jersey for his high school prom. “I chose Kentucky because it was my dream school,” Whitney said. “I feel that Coach Cal can coach, motivate and get the maximum potential on and off the court out of me.”

“I’ve been waiting to talk about Kahlil for a long time but I know how much it meant to him to do this signing back where it all started for him,” Calipari said. “I’m proud of how he was able to take something that was about him and use it for the good of others in his community.

“As far as Kahlil is on the basketball court, he’s long and athletic. He’s in the same mold of some of the best players we’ve had here in that he has the athleticism to impact the game offensively, yet I believe he can be a difference maker defensively. He’s an elite finisher at the rim with the ability to put the ball on the floor and drive it. Kahlil, who is originally from Chicago, has watched this program since Anthony Davis won a title with us and has wanted to be a part of this program for a while. I believe he’s only scratched the surface of how good he can be and I can’t wait to get to work with him.”

A strong and athletic wing who can both attack the rim and shoot from outside, Whitney is ranked No. 8 by in the class of 2019. He is also a projected Top-20 pick in the 2020 NBA Draft, per ESPN.com.

Whitney scored in double figures in all 29 games during his senior season with 11 games of 20 or more points. He was tabbed a McDonald’s All American and was selected to the Jordan Brand Classic. Whitney shined in the Allen Iverson Roundball Classic last weekend with 38 points en route to co-MVP honors. He also won the Allen Iverson Classic Community Leadership Award.

He led Roselle Catholic to New Jersey’s Tournament of Champions as a junior and averaged 21.1 points and 7.2 rebounds on the NIKE EYLB circuit last year.

Whitney’s dad, Kelly Whitney, scored in double figures in all four seasons at Seton Hall (2003-06) and was an All-Big East selection as a senior.

With Whitney’s addition, Kentucky has signed 52 top-50 recruits, 43 top-25 players and 23 top-10 players (according to Rivals) in Calipari’s 11 recruiting classes at Kentucky.