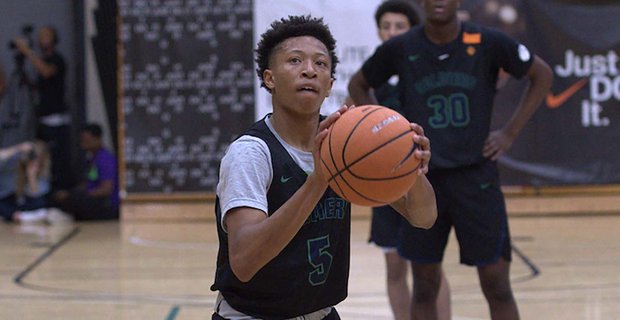 By ADAM ZAGORIA Boogie Ellis, the 6-foot-2 point guard from Mission Bay (CA) and the Oakland Soldiers AAU program, has asked for and received his release. “Yes, he did and we granted it,” Duke spokesman Mike DeGeorge said by email. The news was first reported on Twitter by @MGrads. Ellis initially chose the Blue Devils over Memphis, North Carolina, San Diego State and USC last fall. Washington, Georgetown, Virginia, Arizona, Oregon, Gonzaga, Kansas, Memphis, UCLA and Vanderbilt have already reached out as of late Thursday afternoon, per Loren Leath of the Oakland Soldiers. Memphis assistant Mike Miller is among those expected to be involved for Ellis. Memphis also remains in play for R.J. Hampton, who cut Duke from his list and is now considering Memphis, Kansas, Kentucky and Texas Tech. “He’s the ultimate hard worker, competitor and great teammate,” said Oakland Soldiers coach Loren Leath. “And he he can shoot the lights out.” Last year on the Nike EYBL Circuit, Ellis averaged 17.2 points and 4.5 rebounds in 23 games played. According to 247Sports, Ellis is ranked No. 25 nationally and is the No. 3 player from California.

Duke has point guard Tre Jones and Alex O’Connell returning for his sophomore season and has the No. 1 recruiting class that still includes Matthew Hurt, Vernon Carey Jr., Wendell Moore and Cassius Stanley.

Duke has Tre Jones and Cassius Stanley in the backcourt

Memphis will be involved for both Boogie Ellis and R.J. Hampton https://t.co/KJ1xHJoku9 — Adam Zagoria (@AdamZagoria) May 2, 2019