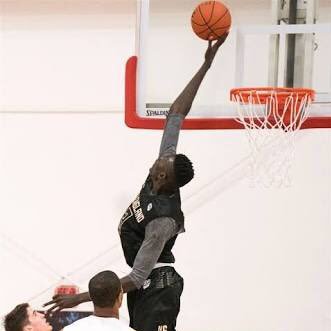 By ADAM ZAGORIA The long and winding recruitment of Chol Marial appears  to be coming to a close. The 7-foot-2 native of South Sudan completed an official visit to Maryland this weekend and is expected to decide within the next month or so, AZ Compass assistant Pete Kaffey said. SMU is among the other schools involved for Marial, who was once considered an NBA lottery pick but has been hampered by injuries and inactivity in recent years. “Offensively, he’s kind of like a [Kristaps] Porzingis because he can stretch the floor and shoot threes,” Kaffey said earlier this year. “He can get in the paint and he has good movement. And his passing vision, I think that’s one thing that people like about him because he can pass the ball.”

This week’s 5-star feature is @MarialChol, a native of South Sudan who is now at @AZCompassPrep in Arizona! #SSoT

According to 247Sports, Marial is ranked No. 131 nationally and is the No. 26 center. For more on Marial, read my feature on Forbes.com from November. Follow Adam Zagoria on Twitter And like ZAGS on Facebook

Cam Mack lands at Nebraska after decommitting from St. John's