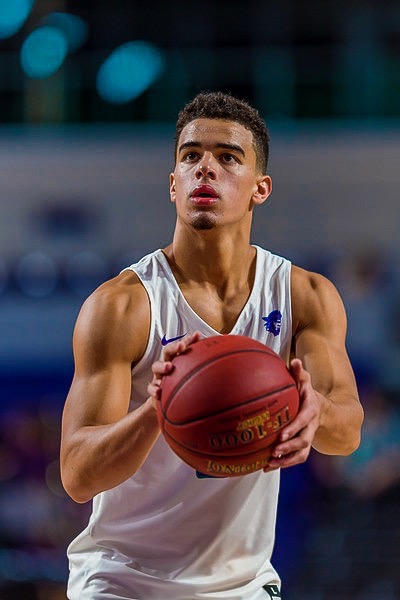 By JACOB POLACHECK The Colorado Buffaloes got some much needed perimeter help when they landed 6-foot-6 JUCO guard Maddox Daniels on Tuesday. Daniels, a sophomore at Florida Southwestern junior college in Fort Myers, announced his commitment to the Buffaloes on Tuesday, following his official visit over the weekend (Mar. 30-31). “When I took my visit this past weekend, I saw the campus, talked to everyone, saw the facilities, and checked out the school and I’m really excited to get to work there,” Daniels told ZAGSBLOG in a phone interview Wednesday. “ The jump to Division 1 basketball was expected for Daniels, especially after a breakout sophomore season. However, his path to the Pac 12 began far before his time at FSW. Daniels’ first exposure to high-level basketball came in 2015, when he attended Montverde (FL) Academy as a high school junior, alongside his twin brother Mason. With a stacked roster, led by eventual No. 1 pick and current Philadelphia 76ers’ All-Star Ben Simmons, Montverde claimed their third consecutive High School Invitational national championship. “I didn’t really play much, but it was a great experience,” said Daniels. “Ben Simmons was there and a lot of other great players that I still know now. That definitely opened my eyes to what high level basketball was.” After his junior year at Montverde, Daniels took his talents to California and transferred to Beverly Hill (CA) High School for his senior season. When it came time to graduate from high school, Mason and Maddox decided they needed another to develop their talents and joined IMG Academy (FL) for a post-graduate year. “IMG was great. It exposed me to a lot of different things, as far as weight training techniques,” said Maddox. “I met a lot of good people and friends. I have a lot of great friends today from IMG.” After his year at IMG Academy, Daniels committed to FSW, while his brother Mason attended a different junior college. In his freshman year at FSW, Daniels averaged 7.9 points on limited playing time, but come sophomore year, he began to break out. With Mason rejoining him at FSW for his sophomore year, Maddox started all 33 games, averaging 13.9 points and 3.0 rebounds with an impressive 3-point percentage of .431, leading to first-team all-conference honors.

Daniels averaged 13.9 points per game and shot 43.1% from 3 point land during his sophomore year at Florida Southwestern. Looks like a three and D type of player. https://t.co/duLawswIkt https://t.co/AwSM1SIDa3

“He wasn’t here at FSW during my freshman year, but he’s been able to come here this year,” he said on Mason joining him at FSW. “Being together, we’ve been focusing on our health and fitness stuff, something we’re really passionate about. It’s been great having him here.”  Daniels credits his strength and conditioning for his drastic improvement in his second year. “It was really about me focusing on my body,” he said. “I’ve always wanted to do a lot of things on the court, but the summer between my freshman and sophomore year, I focused on getting stronger. The rest took care of itself.”  “Defense became easier. Attacking the basket became easier. Shooting became easier,” he continued. “Of course, you have to stay in the gym and work on the court, but I would say the biggest thing was working on my body and getting stronger.”

Soon, Division 1 schools took notice, receiving interest from schools such as Oregon State, Utah, Arizona, Saint Bonaventure, and Wichita State. He broke down his decision to commit to Colorado. “Colorado started talking to me during the second half of the season,” he said. “I’ve just developed a good relationship with them and everyone on the staff.”  Daniels will not be able to make his commitment official until the start of the spring signing period on April 17, but he broke down the role that the coaches at Colorado expect him to play. “They need someone that is going to come in and make shots. That’s my strength, playing around the perimeter and knocking down shots from the outside,” he said. “They also need someone that has experience playing at the college-level that can come in and contribute right away. Of course, the number one goal is to win, so if I can come in and help them win, then that’ll be perfect.”  He will be expected to fill the void left by senior guard Namon Wright and play alongside sophomore McKinley Wright and junior Shane Gatling in the backcourt. Daniels has high praise for the 6-foot point guard Wright. “McKinley definitely makes it easier on the players around him,” said Daniels. “He gets in the lane, he can pass. He’s a smart player.”  Wright spoke with ZAGSBLOG Wednesday about Daniels’ commitment to the Buffs. “I haven’t seen him play too much,” he said. “But from what I know and the little film that I have seen, he can really shoot the ball. His ability to shoot from deep will open up the floor and allow me to create.” Off the court, Maddox, along with his brother are focused on building their business platform Daniels Twins Fitness. “We’ve been focusing on our health and fitness stuff,” said Maddox. “It’s something we’re really passionate about. We won’t be together next year but I hope he can come to Boulder and experience it as much as possible.” Daniels will join Colorado this fall and have two years of eligibility remaining. Photo: FSW Athletics