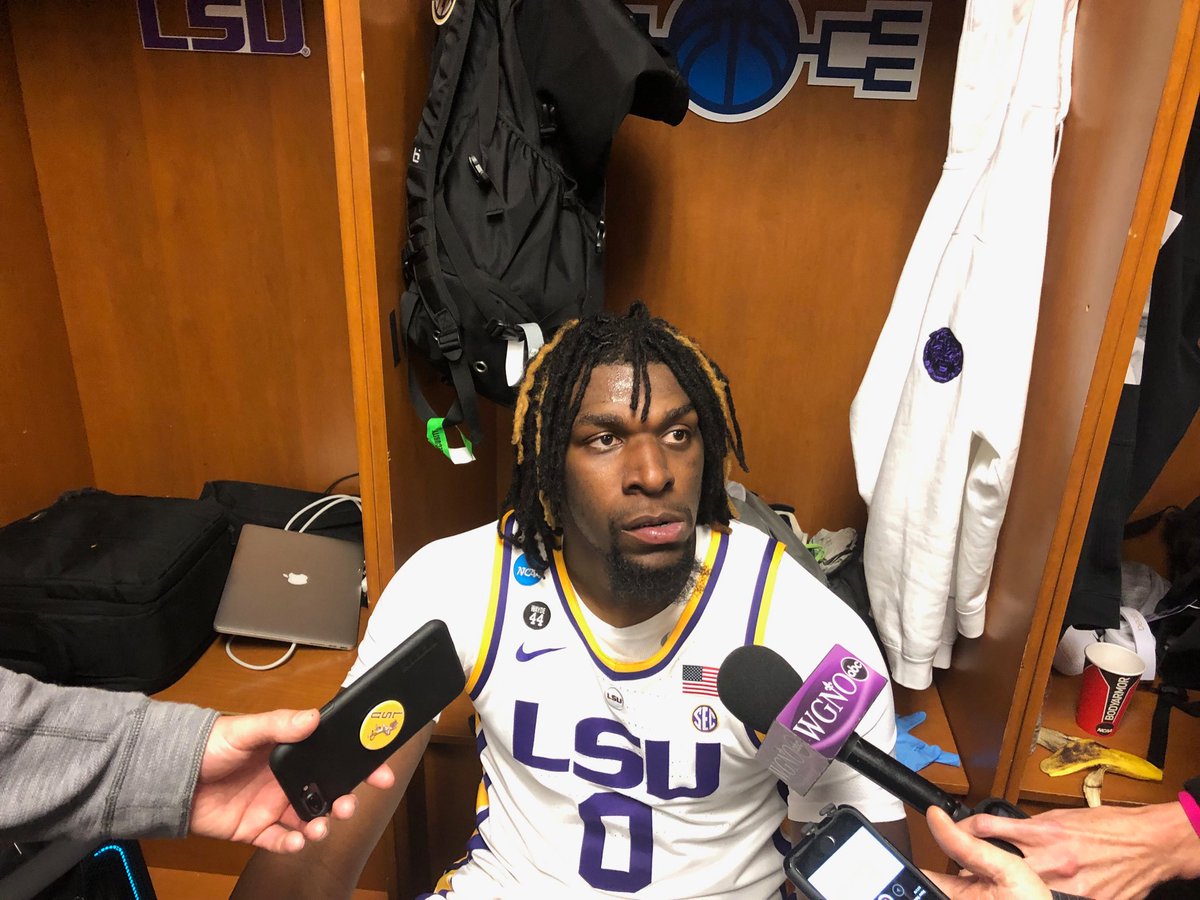 By ADAM ZAGORIA WASHINGTON, D.C. — Naz Reid’s next loss appears like it will mark his final game in an LSU uniform. No. 3 LSU is set to face No. 2 Michigan State in a Sweet 16 matchup on Friday night in Washington, D.C. If the Tigers win, they would advance to meet the Duke/Virginia Tech winner in an Elite Eight matchup on Sunday in the East Regional of the NCAA Tournament. If the Tigers lose this weekend, the staff expects the 6-foot-10 Reid to declare for the NBA Draft after a one-and-done season. “Yeah, we’re expecting to lose him,” LSU assistant Greg Heiar said in the locker room in Jacksonville, Fla., after the team held off Maryland, 69-67, in the second round last Saturday. “If you’re a top-20 pick in the draft, you need to go. You need to go. It’s what his dream is so we want him to chase his dream. You never want to hold a young man back.” The Asbury Park, N.J. native is currently projected as the No. 47 pick per ESPN.com. A number of NBA teams have recently checked in with Reid’s high school coach, Dave Boff, including San Antonio on Monday night. Reid is averaging 13.7 points and 7.2 rebounds on the season. He went for 14 points and 10 rebounds in the first-round win over Yale, and then had 13 points and 4 rebounds in the victory over Maryland. He also set the key screen in the final seconds that enabled Tremont Waters to score on a game-winning layup.

“He’s a winner and he’s won everywhere he’s been,” Heiar said. “Every team he’s ever been on, he’s a winner and he’s going to do whatever it takes to win and that’s what makes him a special player.” Reid led Roselle Catholic to the New Jersey Tournament of Champions title in 2018, the program’s third such crown since 2013 under Boff. He was one of three McDonald’s All-Americans from New Jersey last year, too. Heiar said there are still misconceptions about Reid from NBA personnel and others, and he can’t understand why. “Everybody for whatever reasons has their question marks about Naz Reid as far as does he work hard, does he play hard,” Heiar said. “We can’t even get him out of drills in practice. He’s lost 30 pounds. He’s a winner. He does everything you want and I don’t think they really know who he really is.” Asked why that was, Heiar said, “I don’t know, I don’t understand it, but he’s a wonderful young man, he’s a hard-working young man. He’s where he’s supposed to be when he’s supposed to be. He loves the game of basketball, he loves his teammates and he’s like a coach on the floor with skills. He’s only going to keep getting better and better and better and he works at it.” For his part, Reid has said he wants to make a statement in this NCAA Tournament like some of his role models from the New York and New Jersey area: Kemba Walker and Karl-Anthony Towns. Now, after setting the key screen to spring Waters, he’s in the Sweet 16 with a chance to go deeper. “It’s the first time coming here with the guys I went through a struggle with during the season, and we earned it and I feel like anything is possible,” Reid told me in the locker room Saturday. That struggle has included the death of their teammate Wayde Sims, who was shot and killed in the fall, before the team’s first practice of the season. More recently, LSU placed head coach Will Wade on indefinite suspension after he was caught on a federal wiretap making a financial offer for a player, reportedly freshman guard Javonte Smart. In Wade’s place, Tony Benford has guided the team in the postseason. “We want to do everything we do for [Sims] or Coach Wade,” Reid told me. “Those guys deserve to be here with us and unfortunately they can’t be, but we’re going to do it for them.” In addition to his LSU teammates, Reid has a second set of brothers in the NCAA Tournament. Three of his former teammates from the New Jersey-based Sports U AAU program qualified for the Big Dance — Oregon’s Louis King, Ohio State’s Luther Muhammad and Villanova’s Jahvon Quinerly. King, who is projected at No. 57 in ESPN’s mock Draft, and Oregon play Virginia in a Sweet 16 matchup Thursday night in the South Region. (Several other Sports U guys also made the NCAAs, including Colgate’s Tucker Richardson, Temple’s Nate Pierre-Louis, Wisconsin’s Aleem Ford and Ole Miss’s Breein Tyree. “We just all want to keep winning,” Reid said on Saturday before Ohio State and Villanova lost. “We all have big games. Really we just want to keep winning, and hopefully we play each other.”

Former @SportsUTeamIZOD guys Lou King (2nd from left) and Naz Reid (on right) are both in the Sweet 16 and both are projected one-and-dones. Their teammates Jahvon Quinerly and Luther Muhammad also both made the Big Dance. pic.twitter.com/VOE8rBsWda

Brian Coleman coached Reid and others with Sports U. “The success that these guys are experiencing right now is a true testament to their hard work and dedication,” Coleman said. “The hard work and dedication that they learned is the Sports U way. I’m very happy for those guys and very proud of them, and I wish them the best of luck going further in the tournament.” Reid knows that his next loss could well mark his final appearance in an LSU uniform, and he wants to keep the run going as long as he can. “If it is, I’d like to thank all my teammates and everybody who put me in this position,” Reid told me. “But I actually haven’t decided yet. Right now, I just want to keep winning.” Follow Adam Zagoria on Twitter And Like ZAGS on Facebook