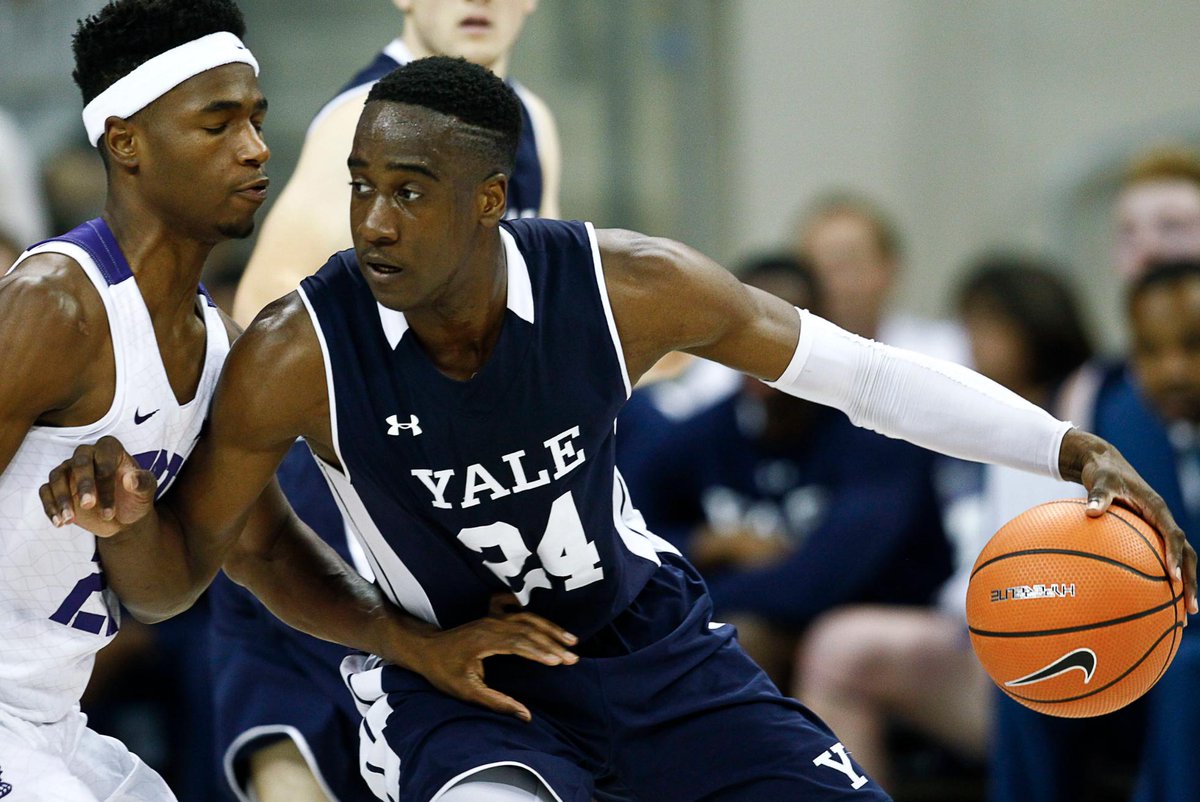 By ADAM ZAGORIA JACKSONVILLE, Fla. —After flushing home a two-handed dunk in the final 90 seconds to cut Yale’s deficit against LSU to 7 points on Thursday afternoon, Miye Oni shook his head and let out an exasperated sigh of relief as he looked upward. A minute later, his 3-point attempt from the right wing would’ve cut the deficit to 4 points, but it rimmed out. The game — and Yale’s season — ended with a 79-74 loss to the Tigers in a first-round NCAA Tournament East Regional game here at Veterans Memorial Arena.  While No. 3 LSU moves on to face the Belmont/Maryland winner, Oni was left sitting at his locker with his head down wondering why this had to be one of his worst offensive days in recent memory. “I’m very disappointed in how I played, and I’m disappointed that this is the last game that I’m playing with this group of seniors,” Oni told me in the Yale locker room after he went 2-for-16, including 1-for-10 from deep, for 5 points along with 5 rebounds, 4 assists, 2 steals and 2 blocks.

MIYE ONI SLAM TO CUT IT TO 6!! pic.twitter.com/WtObvtOOw2

The 6-foot-6 junior from Northridge, Calif., entered averaging 17.6 points and 6.3 rebounds. This was just the second game all year that he failed to score in double-figures and it happened in the NCAA Tournament.

Miye Oni hits a 3 and cuts the lead in Jacksonville! ?#MarchMadness pic.twitter.com/KSmMzyokeD

“I wish I could’ve made a couple more shots to get us in the game,”he said. “I feel like if I had made two or three of those last threes then we win the game, so it hurts. It definitely hurts a lot.” He added: “It wasn’t my best game at all. I tried to get my teammates involved. I tried to play hard on defense and do the other things but it wasn’t my best day offensively at all.” Still, Yale closed to within 77-74 in the final seconds thanks Alex Copeland’s 24 points, Jordan Bruner’s 16 points and 9 rebounds and Azar Swain’s 12 points. “I think we have a lot of weapons on our team that can contribute on any given night,” Yale’s Blake Reynolds said. “So on a night when one guy, like tonight maybe Miye maybe struggled a little bit from the floor, his teammates were there to pick him up and help our team score points. Any given night anyone on our team can hurt you, and I think that’s what made our team so special this year.” LSU interim coach Tony Benford credited the defense of Marlon Taylor. “He’s one of the best athletes in the SEC,” Benford said. “Really good defender. Marlon is about 6’5″, 6’6″. We told him it’s going to be a challenge. Oni is a really good player, he’s a pro prospect, and I thought Marlon did a really good job of really being there on the catch and making it difficult for him to get to the rim, and I thought he challenged his three-point shots really well. So I thought Marlon Taylor did a really good job.” Oni is a projected second-round pick in the NBA Draft per ESPN.com, but some NBA people think he’d be better off staying in college for one more year and playing the point guard position full time.

Miye Oni has struggled today, but he possesses many traits of a two-way NBA wing. On display here is his explosive first step, direct-line drive and finishing ability. #Yale #LSU #MarchMadness pic.twitter.com/Vubh0c7j9F

The Ivy League hasn’t had a player drafted since Jerome Allen out of Penn in 1995, so Oni could well be the first Ivy League player drafted since then — either in 2019 or 2020. “Right now I’m just focusing on working on my game and improving so this doesn’t happen again,” he said. Photo: Rivals Follow Adam Zagoria on Twitter And Like ZAGS on Facebook