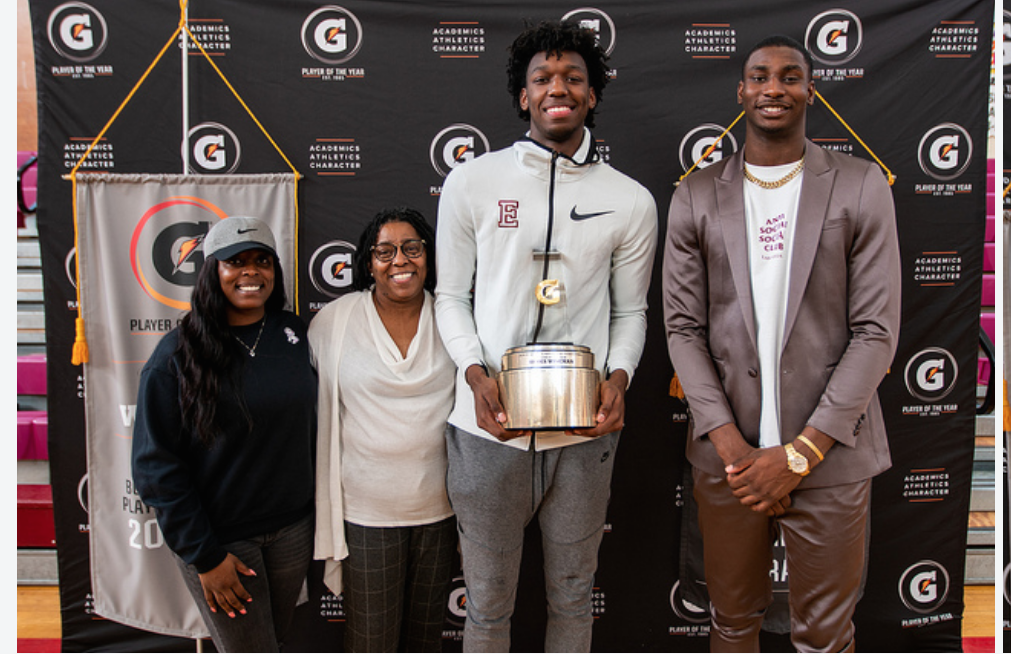 By ADAM ZAGORIA James Wiseman, the 7-footer from Memphis (TN) East, on Tuesday was named the 2018-2019 Gatorade National Boys Basketball. Wiseman was surprised with the award at his high school by Memphis Grizzlies forward Jaren Jackson. “Yeah, I was surprised by it,” he said by phone. Most of the whole school was outside, my teammates. And then Jaren Jackson gave me the award. It’s truly a blessing just to receive this award.” Wiseman beat out Nico Mannion, the 6-3 senior point guard from Phoenix, AZ who is committed to play at Arizona, and R.J. Hampton, the junior guard from Little Elm, TX who is the No. 6 recruit in the Class of 2020 (ESPN) and remains uncommitted.

The 7-foot, 230-pound Wiseman had led Memphis East High School to a 24-8 record and a berth in the Class AAA state tournament quarterfinals at the time of his selection. Wiseman averaged 25.8 points, 14.8 rebounds, 5.5 blocks and 1.3 steals through 32 games. The Class AAA Mr. Basketball winner, Wiseman is ranked as the No. 1 recruit in the Class of 2019 by ESPN, Rivals and 247Sports. He will participate in the 2019 Nike Hoop Summit in Oregon next month, and is the projected No. 3 pick in the 2020 NBA Draft, per ESPN.com.

Wiseman is headed to the McDonald’s All-American Game in Atlanta next Wednesday, and plans to do some recruiting while he’s there. He wants fellow All-Americans Trendon Watford and Precious Achiuwa to join him at Memphis, as well as sharp shooter Lester Quinones, who took an official to Memphis last weekend.

“[I’m trying to get] Trendon Watford and Precious from Montverde Academy,” he said. “Lester as well. I’m trying to get all three of them to come to University of Memphis.”

And what’s his message? “We can make it to the March Madness tournament and we can learn a lot from each other and make each other better,” he said. “Penny Hardaway has a great coaching staff behind him and that’s going to improve our games tremendously. I can imagine myself in the [NCAA Tournament] atmosphere. It’s going to be crazy.” Wiseman can envision a deep run next year if he gets a little more help. “I think we can win it all,” he said. “That’s all I got to say, I think we can win it all.” Follow Adam Zagoria on Twitter And Like ZAGS on Facebook