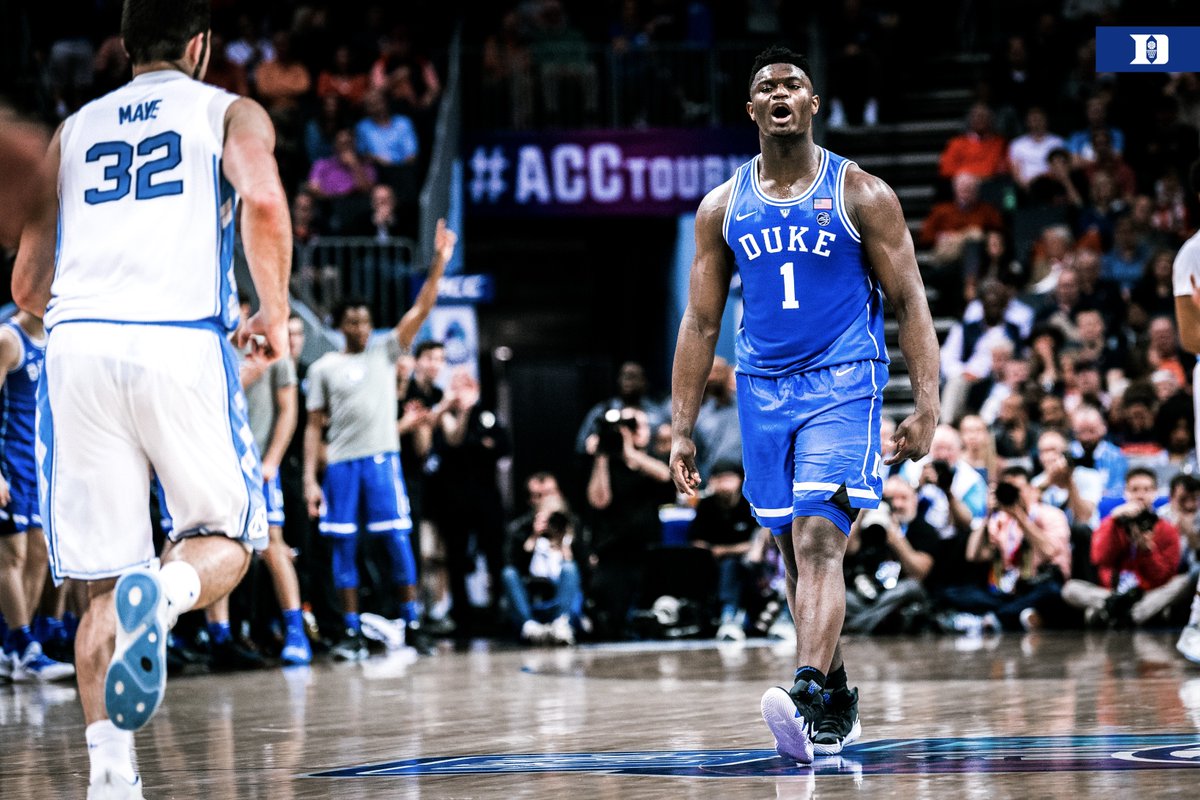 By ADAM ZAGORIA Zion Williamson never got to play a full game against North Carolina during the ACC regular season, but he made the most of his chance in the postseason. In storybook fashion, the 6-foot-7 Williamson made the winning putback with 30.3 seconds left en route to a 31-point, 11-rebound performance as No. 3 Duke-seeded edged No. 2 North Carolina, 74-73, to advance to the ACC Tournament championship game. Williamson scored 11 of the final 13 points for the Blue Devils, who will face No. 4 Florida State in Saturday’s final after the Seminoles stunned No. 1 Virginia, 69-59, earlier. In two games since returning from a knee sprain suffered in a Feb. 20 loss to UNC, Williamson has now tallied 60 points and 25 rebounds. He’s the first player with multiple 25-point, 10-rebound games in the ACC Tournament since Tim Duncan in 1997. “It feels great, we got the win,” Williamson said on ESPN. “Hats off to them, they’re a great team and it was a great game to be a part of.” Said Duke coach Mike Krzyzewski: “Zion, coming off of the injury, to put two games like this together, is, they’re will to win. These two guys [Williamson and R.J. Barrett] have an amazing will to win and it makes us coaches look a lot better.” “The guy that’s been hurt came back and put on his Superman cape again,” UNC coach Roy Williams said.

Zion Williamson over the last 24+ hours – win over Syracuse and win over UNC.

The projected No. 1 pick in the NBA Draft, Williamson sat out the regular-season finale at UNC on March 9– the Tar Heels’ second win over Duke this season — and was itching for a chance to play the Tar Heels one more time. He got the matchup and so did everyone in the basketball world.

Asked if it means more to beat UNC, he said, “I mean, of course it is a rivalry game, but you got to take it one game at a time and on to the next.” With Duke trailing 73-72, Williamson drove to the basket and put up a shot in the lane but it didn’t fall. He immediately grabbed his own rebound and put it back in to give Duke the lead. “That’s just my competitive spirit. I always want to win, so I knew it was coming off,” he said. “I used my second jump and put it back in.”

R.J. Barrett missed two foul shots with 12.4 seconds left that would’ve put Duke up by 3, but Coby White missed a contested long jumper and Nassir Little missed a tip. Duke can now likely clinch a No. 1 seed in the NCAA Tournament with a win over FSU in the ACC final. “It sounds great,” he said. “I mean, it’s a championship so you gotta prepare for it.” Follow Adam Zagoria on Twitter And Like ZAGS on Facebook