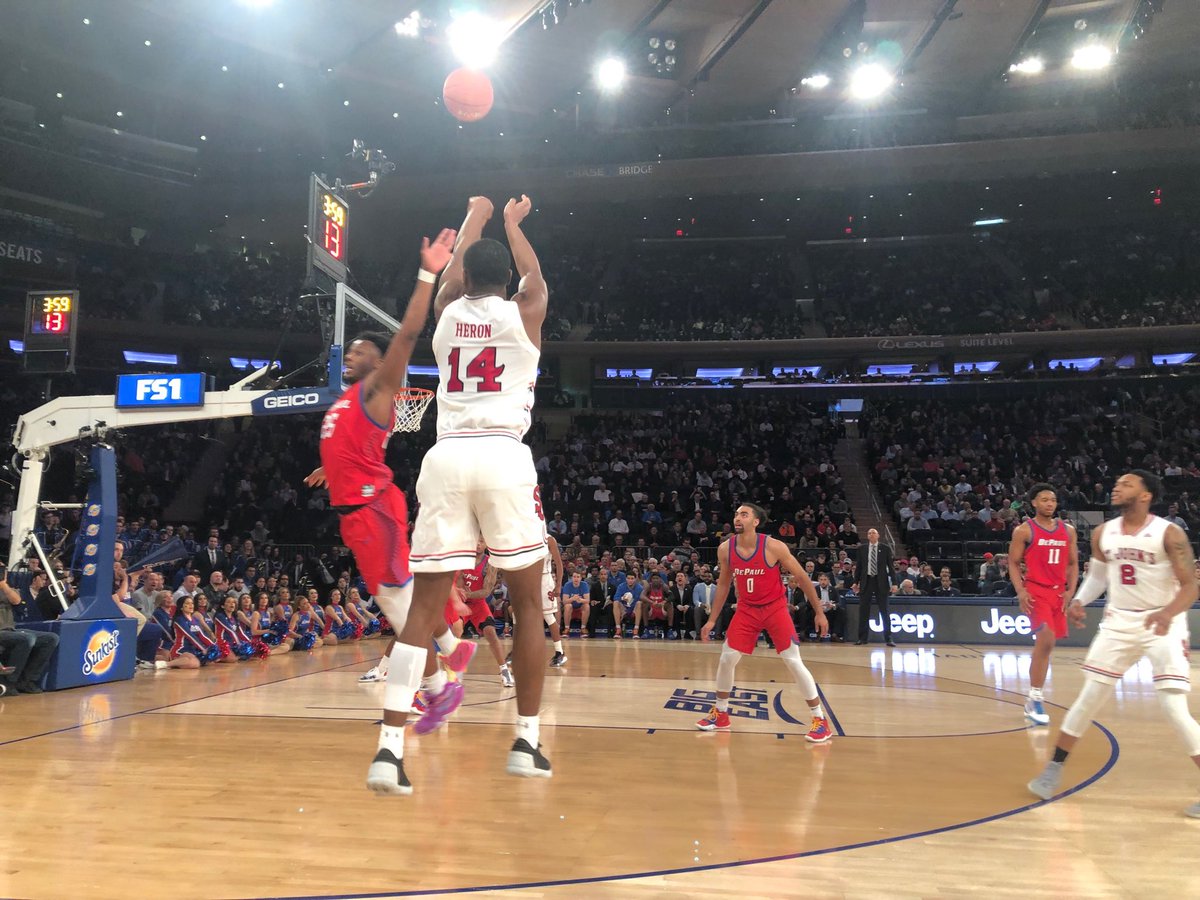 By ADAM ZAGORIA NEW YORK — With a loss to DePaul Wednesday night at Madison Square Garden, Shamorie Ponds and the Red Storm would have faced the unenviable prospect of owning an 0-3 record against the Blue Demons this season. As bad as that sounds, a loss could also have had disastrous implications for St. John’s NCAA Tournament dreams. But the No. 7 -seeded Johnnies got a win when they desperately needed, topping No. 10 DePaul 82-74 to advance to the Big East Tournament quarterfinals on Thursday night against No. 2 Marquette at 7 p.m. The Red Storm (21-11) have beaten the Golden Eagles twice this season. The attendance was a paid sellout of 19,812, the first in the first round since 2013. If St. John’s can make it 3-0 against newly-minted Big East Player of the Year Markus Howard and Marquette, they would face the Seton Hall/Georgetown winner in Thursday’s semifinals. “It’s definitely important for us,” said St. John’s guard Shamorie Ponds, who had 18 points, 7 assists and 4 rebounds. “I feel like with this group we can do something special. We packed for four days, so that’s what we’re looking forward to.” Of Marquette, he added: “It definitely shows that we can beat them. We just have to have the same game plan that we beat them at their home and our home, so I’m looking forward to the game.” The Johnnies entered the day as a projected 11 seed in the South Region, per Jerry Palm of CBSSports.com. Palm told ZAGSBLOG even if St. John’s lost to DePaul they wouldn’t be out of the field of 68. St. John’s last appeared in the Big Dance during Steve Lavin’s final year in 2015. Coincidentally, Lavin was part of the broadcast team for this game. After starting the season 12-0 and entering the Top 25 at one point, the second half of the season has been full of ups and downs for St. John’s. They were 8-11 after the hot start, including losing 4-of-5 entering the Big East Tournament. “My big message to them was to come back mentally and physically fresh,” coach Chris Mullin said of his team’s struggles coming in. It’s a new season.” With Knicks President Steve Mills among those on hand, Justin Simon scored 18 points with 6 rebounds and 4 assists and Mustapha Heron had 18 points and 7 rebounds. L.J. Figueroa added 14 points and 6 rebounds and Marvin Clark 10 points and 5 rebounds. Former St. Benedict’s Prep star Eli Cain led DePaul with 23 points.

After taking a 39-35 halftime lead, St. John’s assumed control in the second half and back-to-back dunks by Simon and Figueroa put them ahead 72-57.

That included a 92-83 loss at DePaul on March 3 in which Max Strus went off for 43 points. On Wednesday, Strus shot just 3-of-11 for 14 points. “It was a team effort,” said Simon, the newly-minted Big East Defensive Player of the Year who guarded him. “Strus is a great player, he can get hot.” It’s March, and anything’s possible. The Johnnies lived to fight another day and have another game on their home floor. “It’s not like the NBA,” said Georgetown coach Patrick Ewing, whose No. 6 seeded Hoyas face No. 3 Seton Hall on Thursday at 9:30. “If you get on a run you can go all the way to the Final Four and the championship.” Follow Adam Zagoria on Twitter And like ZAGS on Facebook

St. John's gets blown out by Marquette, yet is still an NCAA Tournament team