Georgetown beats Seton Hall in double-OT, moves to No. 4 seed in Big East 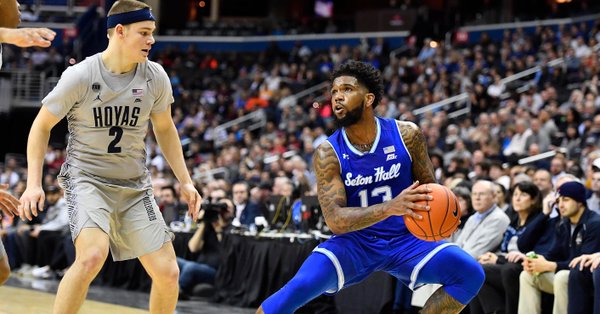 By ADAM ZAGORIA With their 77-71 double-overtime win over Seton Hall on Saturday evening, Patrick Ewing and the Georgetown Hoyas moved into the No. 4 position in the Big East standings. If the Big East Tournament began today, Georgetown would play St. John’s in the 4-5 game, meaning a third meeting this year between Ewing and Johnnies coach Chris Mullin.

Seton Hall (16-12, 7-9 Big East), which lost despite Myles Powell’s 35 points, is now the No. 6 seed and would play No. 3 Xavier in the Big East quarterfinals. New York City native Jessie Govan went for 21 points and 12 rebounds and scored all 11 of Georgetown’s points in the second overtime as the Hoyas improved to 18-11, 8-8 in the Big East.

Both teams are on the bubble, with Seton Hall entering among Jerry Palm’s “Last 4 In” and Georgetown among the “First 4 Out.”

Are Seton Hall and St. John's headed for a first-round matchup in the Big East Tournament?