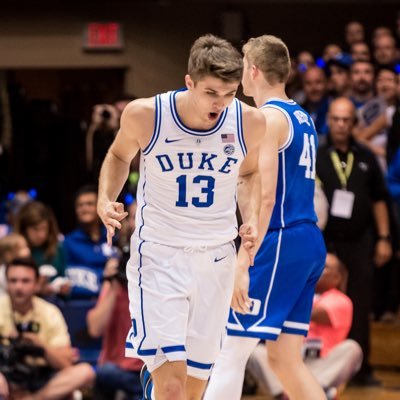 By ADAM ZAGORIA With only four games left in the regular season, Duke coach Mike Krzyzewski burned Joey Baker’s redshirt and put him in the first half at Syracuse. After initially committing in the Class of 2019, the 6-foot-7 small forward from Trinity Christian School (NC) reclassfied to the 2018 class, and then appeared set to redshirt. Baker hadn’t played all season for the No. 1 Blue Devils before the Syracuse game.

With Zion Williamson sidelined with a sprained knee, and a timetable on his return uncertain, Coach K opted to insert Baker against the Orange.

Zion officially out tonight. Not that there was any doubt. pic.twitter.com/szer378CJm

Baker, a five-star recruit, had been part of a loaded freshmen class that includes Williamson, R.J. Barrett, Cam Reddish, and Tre Jones. Those four are projected first-round NBA Draft picks.