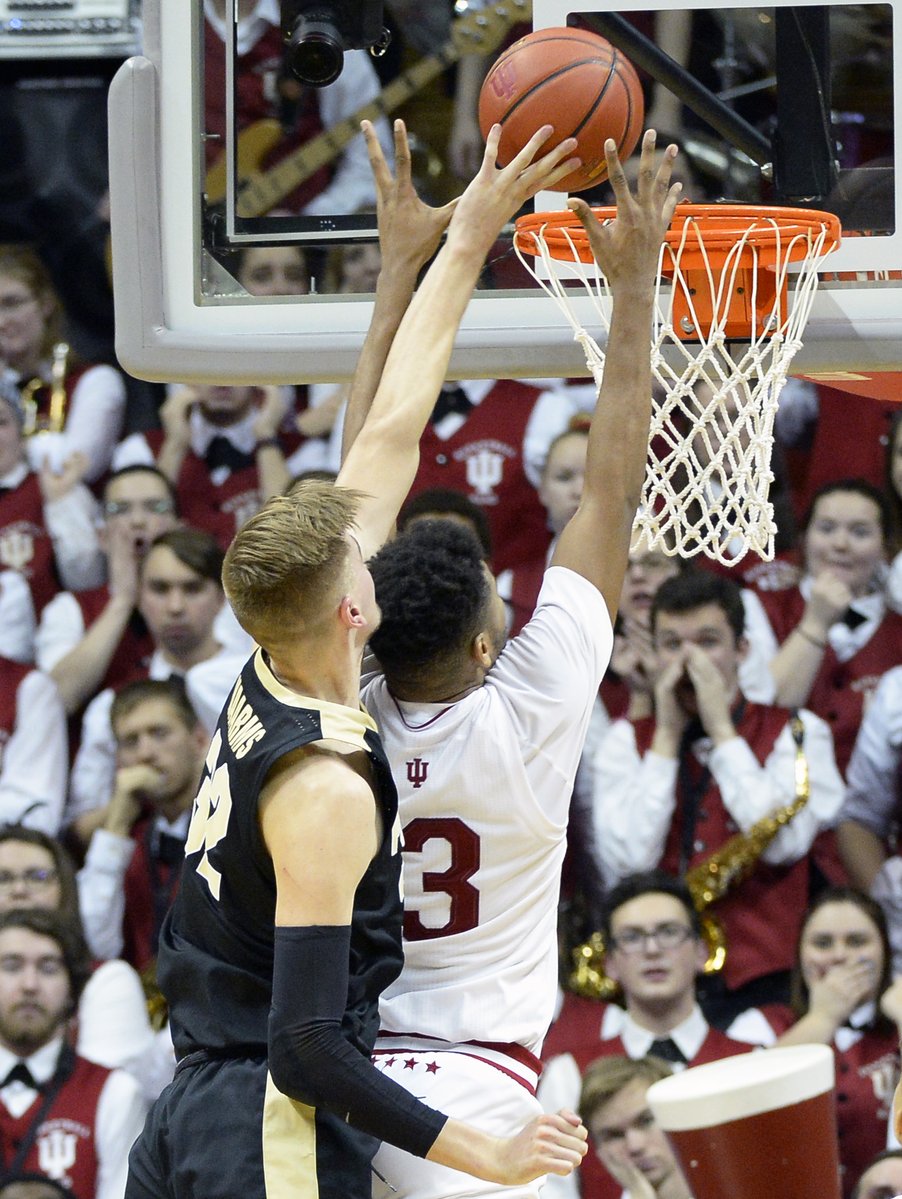 By: MIKE McCURRY On a night in which Carsen Edwards couldn’t hit the broad side of a barn, it was ironically a missed shot by Purdue’s star which set the stage for yet another dramatic Big Ten finish. Matt Haarms’ left-handed tip-in with 3.2 seconds remaining broke a 46-46 tie and proved to be the difference when Juwan Morgan’s 30-footer, eerily reminiscent of Christian Watford’s epic shot, fell just short as Purdue escaped Assembly Hall, 48-46, in a game equal parts slugfest and snooze fest. It’s the fewest points for the Boilermakers in a win since 1992.

Make that ? in a row for @BoilerBall and eight of the last nine in the rivalry!

It was a drama-filled ending at Indiana, and Matt Haarms' tip-in was the deciding bucket: pic.twitter.com/j0Ajr2xLIN — Big Ten Network (@BigTenNetwork) February 20, 2019

Edwards, a potential First-Team All-American, connected on just 4-of-24 shots on the night (he missed all ten of his three-point attempts!), though he did make a huge play late, splitting two defenders off a ball-screen and finishing beautifully at the rim. With the victory, Purdue improves to 19-7 overall and 12-3 in the Big Ten, tied with Michigan State and Michigan atop the conference. The Boilermakers are currently projected to be in the 3-4 seed range in the NCAA Tournament. Between the crushing injury to Nick Ward for the Spartans (remember, Joshua Langford is out for the year as well), the fact that Michigan and Michigan State still have two remaining head-to-head games, and Purdue likely being the favorite in all five of its remaining league games (at Nebraska, vs. Illinois, vs. Ohio State, at Minnesota, and at Northwestern), you could make the case that Purdue, despite losing the quartet of Vincent Edwards, Dakota Mathias, Isaac Haas, and PJ Thompson to graduation last spring, is in the drivers’ seat to win the Big Ten, maybe the best conference in America. That’s amazing. Almost as amazing as Indiana having now lost eleven of their last 12 games, with their lone win in this span somehow coming at Michigan State. NO. 24 MARYLAND TOPS NO. 21 IOWA ON BRUNO FERNANDO’S TIP-IN I mentioned that the Big Ten has not lacked for drama this season, especially when it comes to Iowa. The Hawkeyes, who entered Tuesday having won back-to-back games via improbable buzzer-beating threes, alas regressed to the mean on game-winners courtesy of Maryland’s Bruno Fernando, whose right-handed putback with 7.8 seconds remaining–followed by Jordan Bohannon’s line drive three-point attempt clanking off the front of the rim–resulted in a 66-65 win Terrapins’ victory.

.@TerrapinHoops spoils Iowa’s win streak & gets a B1G win on the road. pic.twitter.com/Lfvx3gDJYg