Jim Dolan has 'no plans' to sell the Knicks: MSG | Zagsblog
Follow @adamzagoria

Jim Dolan has ‘no plans’ to sell the Knicks: MSG 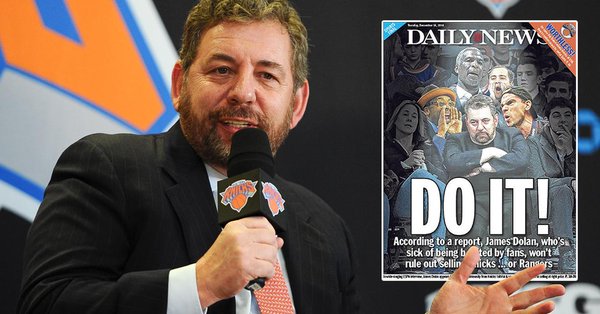 By ADAM ZAGORIA Bad news for a lot of Knicks fans. Owner Jim Dolan has “no plans” to sell the team, according to a statement from Madison Square Garden. “The story is 100 percent false,” the statement reads. “There has been nothing. No discussions. No plans to have discussions – nothing.” Bill Simmons said on his Podcast that Dolan was “courting offers” for the team. “Multiple people told me this, who know things. James Dolan is courting offers for the Knicks. It’s happening. It’s on. It’s go-time. He’s courting offers for the Knicks. That’s what I heard at All-Star weekend from people I trust,” Simmons said in his podcast for The Ringer website, via the Daily News. ESPN’s Ian O’Connor reported in December that Dolan would consider selling for $5 billion. “No one has come through with a bona fide offer,” Dolan said. “You hear numbers all the time. … I think people have sent feelers out, but never any that were pursued. Yeah, [the feelers are] around that number [$5 billion].” After the 2000–01 season, the Knicks had nine consecutive losing seasons between through 2009–10. The Knicks made the postseason in the next three seasons, and then lost a franchise-worst 65 games in 2014–15. As they tank for Duke’s Zion Williamson, they currently own one of the NBA’s worst records at 11-47 and could break the franchise record for losses.

‘If Jim Dolan sells the Knicks I might consider going there. What about you KD?’ https://t.co/Iyycabncb7