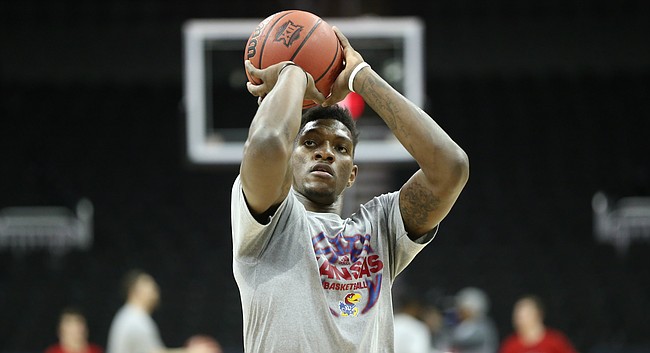 By JACOB POLACHECK Kansas sophomore center Silvio De Sousa has retained an attorney to represent him in his attempt to have his NCAA eligibility restored. NCAA infractions attorney Scott Tompsett has represented numerous athletes and coaches in cases involving the NCAA, including former Connecticut coach Jim Calhoun, former Huskies guard Ryan Boatright and Texas A&M quarterback Johnny Manziel. “It’s time for the NCAA to be fair to Silvio and immediately reinstate his eligibility,” said Tompsett in a statement Thursday. De Sousa has been absent from the entire 2018-19 season following allegations in federal court that his guardian accepted money from an Adidas consultant. “Silvio came to the United States from Angola at the age of 15, and he did everything he was supposed to do and was asked to do to become an eligible student-athlete at the University of Kansas. Silvio followed the rules. He did nothing wrong,” said Tompsett. “If adults did something illicit or against the rules, they did it without Silvio’s knowledge or involvement. Their actions and conduct can be dealt with through the courts and/or the NCAA major infractions process.” In a statement issued by the athletic department Thursday night, Kansas athletic director Jeff Long said the university is working with the NCAA to address De Sousa’s eligibility to compete. “The process is ongoing and we will continue to work closely with the NCAA staff,” Long said. “Our commitment to integrity and to the process is unwavering. While the past several months have been difficult for this young man, Silvio continues to work hard in the classroom and in practice and he has been an exemplary teammate. His patience and cooperation throughout this process have been admirable and we look forward to a resolution.” At the Adidas trial in New York last October , Thomas “T.J.” Gassnola testfied that he paid de Sousa’s trainer, Fenny Falmagne, $2,500 for online courses, but did not pay him the $20,000 that Falmagne requested to help get him out from under a $60,000 loan given to him by a Maryland booster. De Sousa committed to Kansas on Aug. 30, 2017. Self had a five-minute phone conversation with Adidas executive Jim Gatto a day later, during a time the FBI was wiretapping Gatto, but the conversation was not recorded because of a “technical issue.” “Kansas’ head coach knew of and asked for a payment to be made to Silvio De Sousa’s handler,” Gatto’s attorney, Michael Schacter, said during the trial. “Coach Self and Coach (Kurtis) Townsend knew of and asked for this payment to be made to Fenny.He added: “Coach Self, in T.J. Gassnola’s mind, speaks for Kansas, and Kansas wants Adidas to help Kansas recruit players. Nike does the same thing for their schools, and if Adidas doesn’t do the same, they’re going to lose their schools to Nike.” De Sousa averaged 4 points and 3.7 rebounds in 20 games as a freshman last season. He joined KU in December 2017 after graduating in three-and-a-half years from IMG Academy in Bradenton, Fla. Kansas will be without junior big man Udoka Azubuike this season, after it was announced that he will undergo surgery to repair ligament damage in his right hand. Follow Jacob on Twitter Follow Adam Zagoria on Twitter And Like ZAGS on Facebook

Duke regains No. 1 spot in AP Top 25 men's hoops after Texas Tech win; Kansas drops to No. 5 after loss