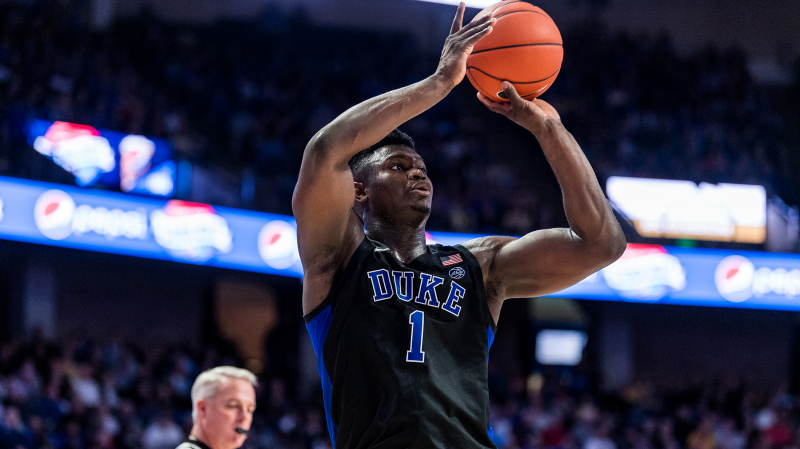 By ADAM ZAGORIA If there is any question about Zion Williamson, it is his shooting ability. Everyone knows the 6-foot-7, 285-pound Duke freshman can dunk, drive, run the floor, rebound and pass — all with an incredibly high motor. But in an 87-65 rout of Wake Forest on Tuesday night, Williamson made 3-of-4 3-pointers en route to a 30-point, 10-rebound, 5- assist night, proving that he can shoot the deep ball. The presumptive No. 1 pick in the NBA Draft became the first Duke freshman to post such stats. He entered the game with just four 3-pointers all season. “I kind of hate always being classified as a dunker because I feel like Coach K wouldn’t just recruit me if  he knew I was a dunker but I guess people on the outside don’t understand that,” Williamson said.

Look At Zion get after it ? He misses 3 pointer, blocks the shot, makes 3 next play ?? He plays with Heart ? @ZionW32

Williamson and Ben Simmons are the only freshmen in the last 30 years to post a 30-10-5 night along with 4 steals. “I think eventually if he can just make a stand-still three and force hard closeouts, but just be respectable so that teams have to close out to him,” ESPN’s Mike Schmitz said on air. “Kind of similar to Draymond Green, how he developed beyond the arc. He’s the clearcut No. 1 pick right now.” Williamson and No. 1 Duke visit get No. 13 Florida State on Saturday before hosting Syracuse Monday and then No. 4 Virginia on Jan. 19. Photo: Duke Athletics Follow Adam Zagoria on Twitter And like ZAGS on Facebook