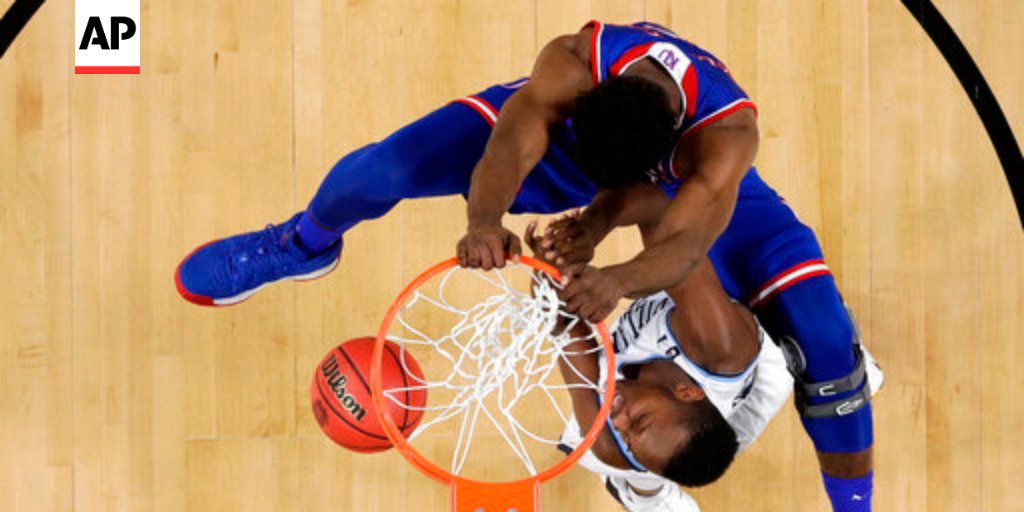 LAWRENCE, Kan. (AP) — Dedric Lawson had 28 points and 12 rebounds, Lagerald Vick scored 29, and top-ranked Kansas made enough free throws down the stretch to beat No. 17 Villanova 74-71 Saturday in a rematch of last season’s Final Four showdown won by the Wildcats.
Devon Dotson added 11 points for the Jayhawks (9-0), including four free throws in the final 1:10 to help Kansas end a three-game losing streak to Villanova — the last two in the NCAA Tournament.

Unlike the national semifinals in April, this one came down to the wire.
Collin Gillespie’s three-point play drew the Wildcats (8-4) within 69-65 with 31 seconds left, and Vick gave them an opening when he threw the ball away on the ensuing inbounds play. But Vick atoned for the mistake by pulling down a defensive rebound, and then calmly made a pair of free throws at the other end.
Phil Booth’s deep, line-drive 3 got Villanova within 71-68, and after Lawson made the second of two foul shots for a 72-68 lead, Booth added another driving layup to trim the deficit to two.
Lawson added two more free throws to restore a 72-68 lead with 7.5 seconds left, and Gillespie was fouled at the other end. He made the first but was forced to miss the second on purpose, and the ball squirted toward the Wildcats’ bench, where a scrum ultimately gave Kansas the ball with 0.4 seconds left.
Once the Jayhawks inbounded the ball, they finally had a long-awaited win over the Wildcats.
Even if it came with far less on the line.
Booth finished with 29 points for the Wildcats. Eric Paschall scored 17 but was rendered ineffective down the stretch because of foul trouble, and Gillespie finished with 15 but was just 1 for 7 from 3-point range.
Kansas has now won 39 straight in Allen Fieldhouse as the nation’s top-ranked team.
The Jayhawks led 33-31 at halftime, despite playing most of the way without Dotson and fellow starter Quentin Grimes. Grimes picked up three early fouls and Dotson had two, relegating them to the bench.
Their teammates picked them up with the kind of defensive effort Kansas sorely needed in their lopsided Final Four loss, when Paschall and Co. made just about shot they took. The Jayhawks harried the senior forward into a couple of crucial turnovers while largely shutting down the paint.
Villanova found its offensive stride in the second half.
Then again, so did Kansas.
And what most had envisioned as an up-and-down, back-and-forth showdown between national powers turned into precisely that. The game was tied six times over the first 12 minutes of the second half.
It wasn’t until Paschall went to the bench with four fouls and 7:57 to go that the Jayhawks established some breathing room. Lawson scored inside to give Kansas a 57-56 lead, and after Vick knocked down a baseline jumper, Lawson added another bucket to force Wildcats coach Jay Wright into a timeout.
That set up the frantic finale.
NO QUINERLY
Villanova freshman Jahvon Quinerly watched from the bench after an Instagram post earlier in the week criticizing his own program. Wright said Quinerly had apologized and it would be used as a “teaching moment.” The five-star recruit has played in only eight games this season.
CELEB SIGHTINGS
Chiefs quarterback Patrick Mahomes and Hall of Fame Royals third baseman George Brett were in the crowd. So was a handful of former Kansas players, including Nick Collison, who is No. 2 on the school’s career scoring list.
BIG PICTURE
Villanova played much better than it did in a loss to Penn earlier in the week, putting a scare into the No. 1 team in the country. But the Wildcats were just 3 of 15 from beyond the arc in the second half, and they were dominated on the glass for the second consecutive game.
Kansas has certainly earned its ranking, beating a trio of ranked teams already this season. The one thing the Jayhawks haven’t done is win a true road game, and they’ll get that opportunity when they head to No. 20 Arizona State next weekend.
UP NEXT
Villanova plays UConn next Saturday at Madison Square Garden in New York.
Kansas hosts South Dakota on Tuesday night.