With Trae Young Gone, Christian James Is Now the Alpha Dog at Oklahoma 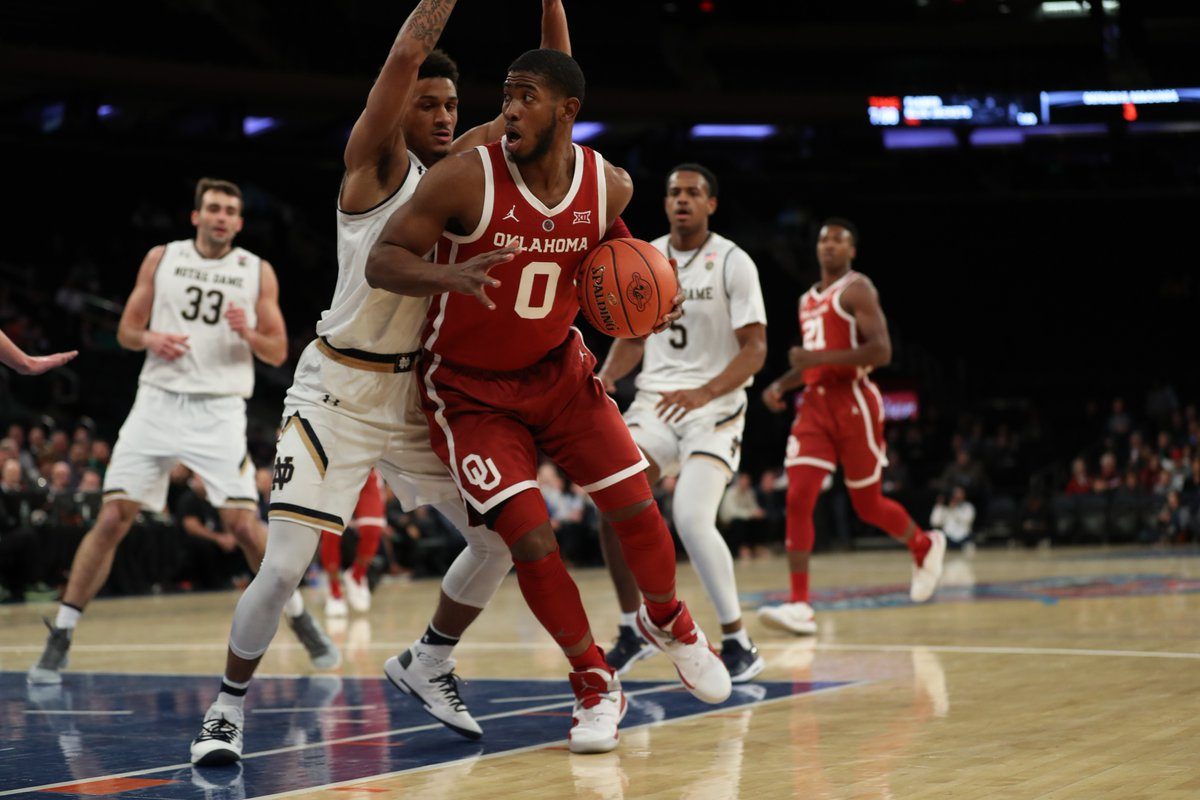 By ADAM ZAGORIA NEW YORK — With Trae Young now earning NBA Rookie of the Month honors, Oklahoma has another alpha dog stepping into his place. Senior guard Christian James went off for 25 points, 10 rebounds and 3 assists, including his team’s last 9 points, to lead the Sooners to an 85-80 victory over Notre Dame in the Jimmy V Classic at Madison Square Garden. Brady Manek added 17 points, Aaron Calixte 12 and Matt Freeman 11. The 6-foot-4 James is averaging 19.1 points and 3.9 rebounds and has four games of 20+ points for the Sooners (7-1). “He’s a man and tonight it was NBA kind of stuff,” Notre Dame coach Mike Brey told me. “Rising up from three, taking you to 15 feet and rising up. He’s very impressive. He’s a man.”

James had 9 points at the break but scored 16 in the second half. “Just take over,” he told ESPN’s Allison Williams of his mindset. “I saw we needed a boost for our team and they went on a big run and I just took over. Something in my mind said just go get it.” Oklahoma assistant Carlin Hartman said James now “believes at the end of the game that he can take it over and we have a lot of trust in him.” Hartman and the Sooners watched as James took over the game late in wins over Dayton and Florida last month, scoring 21 and 18, respectively. “He was the one creating separation and going one-on-one and we feel good about that,” Hartman said. “We like to think that we have a lot more weapons that can give him a little space out there. You put Brady [Manek] out there in one corner,  you put Calixte, you put some other guys, you gotta identify with those guys, it just gives Christian all the room in the world.” Sooners coach Lon Kruger praised James’ all-around game. “Christian’s been fantastic,” he said. “He’s not just making shot, he’s making good basketball plays. Defensively, he’s doing a great job as well. He’s given us consisently good performances every night.” When Oklahoma recruited James, beating out Oregon and LSU, “We knew he had it in him,” Hartman said. James had broken his leg going into his senior year and wasn’t able to showcase what he could do. After going to the Final Four as a freshman and playing limited minutes, James has increased his scoring output each year from 3.0 points to 7.9 to 11.9 to 19.1. The comparisons to Trae Young are unfair, but James is clearly the go-to guy in the post-Young era. “He’s different than Trae,” Hartman said. “Trae was so good with the ball in his hands. Christian’s a little bit better in catch-and-shoot and playing in a straight line and creating separation.”   Photo: OU Basketball Follow Adam Zagoria on Twitter And Like ZAGS on Facebook